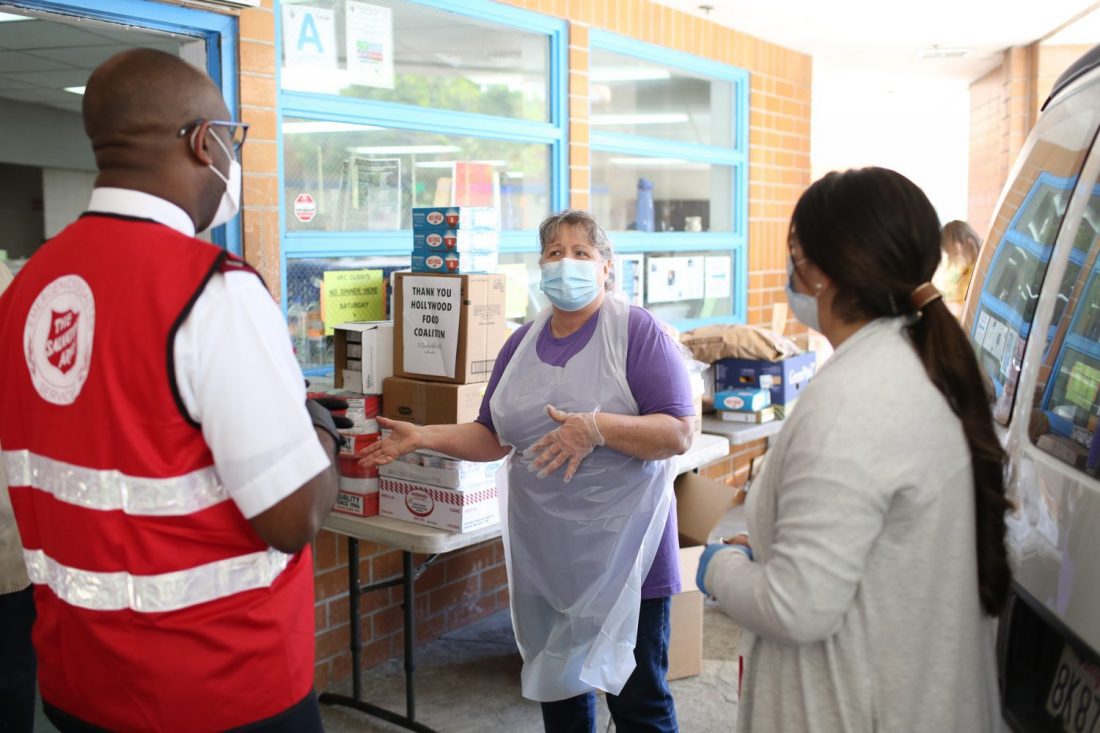 Western Territorial Commander Commissioner Kenneth G. Hodder held the 20th teleconference meeting regarding The Salvation Army’s response to COVID-19 April 27 with members of the Territorial Executive Council, divisional leaders and key staff, who joined in via Zoom from throughout the West.

The meeting marked the transition to a longer meeting format to accommodate questions, comments and idea sharing, as well as a change in meeting frequency. Meetings will be held on Monday and Friday.

After a roll call of command heads, Hodder shared one announcement: Giving Tuesday will be held May 5. Traditionally Giving Tuesday is held during the Christmas season, but in light of the present circumstances surrounding COVID-19, The Salvation Army has elected to hold a special Giving Tuesday event.

In Alaska, Governor Mike Dunleavy and Anchorage mayor Ethan Berkowitz unveiled plans to start reopening the state and city, respectively, last week. Among the first wave of openings are places of worship, with safety measures. The Salvation Army in Alaska will be meeting today to see if officers can resume traditional worship gatherings.

Since the last command head briefing, Alaska has seen 22 confirmed cases, bringing the statewide total to 341, with 61 recoveries. The number of deaths, 9, has remained stagnant for the last few weeks, Alaska Divisional Commander Major John Brackenbury said, adding that native tribes remain concerned about their elders.

The Army’s 24-hour emergency housing for children has opened in Anchorage, and there are six families that have potential for sending kids for housing because of contact or illness. There are currently about 25 quilters making 100 quilts that will be distributed to the children there. The Mat-Su Corps was declared by the state as the lead agency in the Mat-Su Borough for food assistance. In Hoonah, the corps officer picked several pounds of seaweed, dried it and then distributed it to the community along with over 200 pounds of clams and shrimp. The Army received a check for $50,000 for food from an individual following an online interview with the Anchorage Press.

“The whole virus itself may be waning…but the economic effects will be with us for years to come,” Brackenbury said. “Oil has been decimated in the state. Tourism, the cruise industry is not expected to come at all, and fishing…Those three things are the largest producers of economic development in the state and they’re talking tens of billions of dollars in lost revenue.”

While California remains under Stay at Home orders, Chamness said the division is thinking ahead to prepare for an eventual reopening, and that a group is working on plans for all corps for both how they will reopen as well as how they will continue to have an online presence.

“What we found was we were reaching a lot more people with online corps than normal corps,” Chamness said. Moving forward, avenues like holding online Bible study, Women’s Ministries and Sunday school have been suggested. Chamness said Divisional Music Ministries Director Kevin Larsson and the program department have been instrumental in helping corps improve their services online.

Chamness shared several more highlights: that he and Lt. Colonel Lani Chamness visited five more corps; the division’s upcoming It Takes an Army virtual fundraiser May 1; how the Boy Scouts collected food for Long Beach Citadel; and how a donation of 20,000 pounds of food has helped the Riverside Corps, where the need for food boxes has grown 75 percent to 1,000 per week.

On April 26, Divisional Youth and Candidates’ Secretaries Captains Claudia and Juan Barriga held the first virtual Future Officers Fellowship, with more than 30 in attendance, with some joining in from the Hawaii and Pacific Islands, Cascade and Northwest Divisions.

In the Cascade Division, Major Nancy Dihle reported Operation Hope Share—the Army’s food efforts in Portland—is in its final stages of implementation. On May 4, the Army will hold a major food distribution in three locations across the city, serving four times as many. Dihle said it will also leverage volunteers who have wanted to serve but haven’t had an outlet so far.

The Newport (Oregon) Corps is doing a similar food distribution setup. On Friday, the corps found out the city’s food bank can’t serve any longer because it relies on older volunteers, so the corps, while small, has stepped up to stand in the gap.

Across the division, the Army has been able to have 15,000 points of contact for emotional and spiritual care during the COVID-19 crisis.

“We thank the Lord in the midst of difficulty,” Dihle said.

Del Oro Divisional Commander Major Ivan Wild shared highlights from two corps. In Stockton, the Army is growing a good presence in the community and is positioned as the hub for the area’s food distribution. The corps received a $3,000 grant from the United Way and used the funds to create food boxes for migrant farmworkers. Last week, the corps was contacted to set up tents for sheltering those experiencing homelessness in isolation.

While the Oakland Chinatown Corps doesn’t have a large social services presence, Wild said the corps continues to collect personal protective equipment (PPE). As a result, Major Ester Hsu developed a relationship with United Chinese Americans and will join them for Chinese American Food of Love Day.

The division is holding an online Bible study for its officers, featuring guest speakers from past officers’ councils.

Golden State Divisional Commander Major Darren Norton said the officers in the division are looking forward to their meeting with the Urys this evening. The division remains under lockdown, and while no official announcement has been made, Norton anticipates an extension of two weeks

Hawaiian and Pacific Islands Divisional Commander Major Jeff Martin said Hawaii is experiencing a downward trend in its number of COVID-19 cases, and that state parks are reopening so people are able to go out and exercise again. Throughout the state, 285,000 workers are unemployed, and the Army is seeing more requests for services. It is working with Aloha United Way to provide rent and utility services.

The Kroc Center is continuing its drive-through service, where people can receive fresh produce, eggs and meals. The division’s emotional and spiritual care team has been sending out cards of encouragement to many, including those in the Adult Rehabilitation Center (ARC) and healthcare workers. Advisory boards and Echelon continue to meet via Zoom, and funds from a canceled Fall gala have been redirected to aid in COVID-19 efforts.

The Army is holding a food distribution event at the Polynesian Cultural Center on Oahu May 9. Along with the recently donated beef, the Army received five pallets of See’s chocolates it plans to distribute.

“We think that will be a nice addition for Mother’s Day,” Martin said.

Following the divisional reports, the meeting moved to a forum to discuss major food distribution events. Hodder closed the meeting with a devotional thought from Acts 8:24: “Then Simon answered, ‘Pray to the Lord for me so that nothing you have said may happen to me.’”

It is important to make sure our motives and our heart are right with God, Hodder said. Our motives must not be anything beyond fulfillment of the mission given by God to the Army. Let your light so shine. Stay firmly focused on what we are doing and why we do it.

Hodder then closed the meeting in prayer.