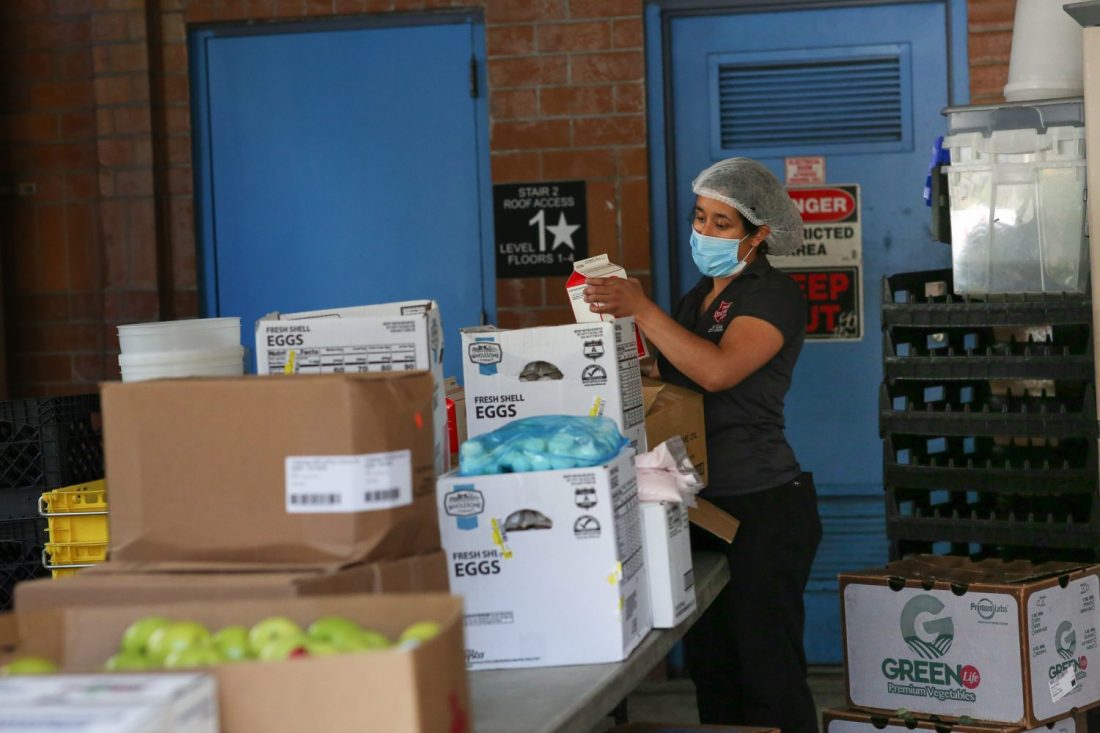 Western Territorial Commander Commissioner Kenneth G. Hodder held a teleconference meeting April 24 with members of the Territorial Executive Council, the 19th of such meetings regarding The Salvation Army’s response to COVID-19.

Divisional leaders and key staff joined the meeting from across the West by Zoom, and limited participants met in the Territorial Headquarters (THQ) boardroom while wearing masks.

After a roll call of command heads, Hodder shared several announcements, the first regarding The Church of Jesus Christ of Latter-day Saints (LDS) and its blossoming relationship with The Salvation Army, both in the Western Territory and nationally. He thanked Intermountain Divisional Commander Major Mike Dickinson for his efforts to develop this relationship. LDS donated $1.5 million to The Salvation Army on April 23 to support its COVID-19 relief efforts. In addition, they have offered truckloads of goods—both perishables and paper—as needed. Territorial Chief Secretary Colonel Doug Riley will coordinate the allocation of funds. Plans include creating drive-through food distribution events in Seattle, Denver, Los Angeles, Las Vegas, Portland, Honolulu, the Bay Area and Anchorage. For LDS, the goal is to get the funds to the locations of greatest need. A portion of the funds will be shared nationally.

“We want to ensure that this very kind gesture leads to further collaborations for The Salvation Army in our other territories as well,” Hodder said. “It’s exciting news, wonderful news!”

Monday’s meeting will cover the LDS donation in more detail.

Next, Hodder clarified that although officers were placed on disaster service, they are still able to use discretion with general donations; these do not necessarily have to go toward EDS. “Though we are getting a lot of donations for COVID-19, we’re receiving an even greater number of donations for general purposes,” Hodder said.

Hodder noted that the Western Territory is experiencing Christmas-level donations. The Community Relations and Development Department is working hard to get those funds out as quickly as possible.

Questions are coming in about the reopening of corps programs, specifically worship programs. “You are in charge of The Salvation Army in the states that you serve,” Hodder said. He advised that the Divisional Commanders defer to state guidelines as opposed to county guidelines (with extra consideration if county guidelines are stricter than the state’s). Divisional Commanders who share a state are asked to work closely in making these decisions. Finally, Hodder asked that they keep THQ informed about any plans to reopen programs.

The command briefing meeting format will change April 27. Going forward, meetings will be 45 minutes, with six command reports of three minutes each, followed by a time of discussion. Monday’s topics will include LDS, disaster fund policies and other questions or ideas submitted for discussion.

Southwest Divisional Commander Lt. Colonel Kelly Pontsler noted that summer has arrived in the Southwest Division; the temperature is expected to reach about 108 degrees on Sunday. The division is already on standby for heat relief.

She read a note from Sun Cities West Valley Corps Officer Captain Mark Merritt, who shared what one woman told him as she picked up food. “You’re keeping my two young boys alive,” she said, before bursting into tears. The corps conducts a drive-through meal pickup daily, providing a hot breakfast and a bagged lunch. They have gone from serving 60 meals a day to 200. Pontsler said possibly 75 percent of the cars are picking up meals for neighbors and friends who are unable to get out.

In Farmington, New Mexico, the neighboring Navajo Nation is being ravaged by the virus. The corps has been approached to manage a 20-room hotel-based isolation facility. In Albuquerque, The Salvation Army is providing food support for workers at a testing site at Walmart.

Salads and Go brought salad ingredients to Divisional Headquarters for the preparation of 1,500 salads; they will do the same next week. These went to local corps units this week. Next week, the salads will be directed to the Salt River Pima Indian Community, which has a significant need for food. Pontsler said she is grateful for the partnerships they have.

Hobbs (New Mexico) Corps Officer Major Lisa Smith is requesting prayer for the southeast New Mexico region, where the economy is dependent on the oil industry; the region is suffering.

“I’m struck by the number of instances you refer to that are not directly related to medical issues; they’re all economic issues now, and that’s going to be the case, I think, increasingly as we move forward,” Hodder said in response to Pontsler’s report.

In Long Beach, the men sorted clothes to make a bale load, preparing room for more donations; lots of donations have been coming in. They cut trails at Camp Mt. Crags this week and they have been serving at the Long Beach Citadel Corps, helping prepare food boxes.

The Honolulu ARC had five graduates; three are staying for phase two. The ARC celebrated the last beneficiary who entered the program before they had to stop receiving intakes. The men cheered his progression in the program. “Let’s make sure we celebrate in the same way when the doors are reopened again and the first new man comes within,” said Administrator for Business Major Ron Fenrich. “Let’s celebrate him just as much as we celebrate our brother here tonight.”

The Phoenix ARC had two women and one man graduate; one woman and one man are staying for Phase two. The Las Vegas ARC received a donation from a University of Nevada Las Vegas sorority for its women’s program. They also have a meeting scheduled at the VA Hospital with commanders of VFW homes about fundraising for the ARC program.

The San Francisco ARC had 18 alumni in chapel this past week; normally they don’t have alumni in chapel. These men and women, however, graduated but they did not leave. “To hear that they’re staying because they want more of what the Army has to offer is marvelous,” Hodder said.

Graciani also confirmed that there are no COVID-19 reports in the ARCs to date.

CFOT Principal Major Nigel Cross noted that the college is almost one-fourth of the way through this quarter, with students and staff adjusting to the “new normal” of online classes and limited social interaction. Some technical issues continue to arise, but the IT department is helping with those. The cadets are still doing some EDS work, and they made 900 follow-up phone calls after the April 21 Donor Hall teleconference.

The summer assignment chapel will take place May 4, observing appropriate social distancing. This event may be live-streamed.

In other news, a water pipe was damaged while a fire hydrant was being replaced—it’s the pipe that supplies Crestmont Lane, where CFOT officers live. Water may not be restored for two weeks, so the affected officers have been relocated to temporary quarters at the college.

Silvercrest Executive Director Susan Lawrence reported that the Silvercrests continue to focus on safety, isolation and food. Captain Joshua Sneed now prepares a pre-recorded daily devotion of comforting words and Scripture—the Word of Peace. Residents can sign up for the daily, encouraging call. The support of Silver Line continues to be helpful, and the department has received expressions of gratitude for this service. Corps and EDS continue to support the residences. The Eureka Corps in the Del Oro Division provides soup two to three times a week, delivering it door-to-door, which provides positive contact in addition to food. That residence has a buddy system in place, which helps them keep in contact with each other.

The Colorado Springs Corps in the Intermountain Division brings two hot meals a day, Monday through Friday, to the Silvercrest, where Silvercrest staff deliver the meals to the residents. Since March, they’ve had over 1,400 meals delivered. The North Las Vegas Corps holds a food cantina for the Silvercrest two days a week and they provide residents with toilet paper and PPE. The Wahiawa Silvercrest in Hawaii is looking forward to the beef promised by Major Jeff Martin, with the coming donation of cows. The residents have been receiving four meals a week, along with milk and eggs. At the Pasadena (California) Silvercrest, some of the residents have been bragging to their friends in other facilities about how good they have it.

“I don’t ever recall a period with this level of collaboration [with the corps],” Hodder said. “We’re creating relationships we never had before.”

Hodder also said the number for Sneed’s devotion will be made available so anyone who wishes can listen to it.

He offered words of encouragement, saying, “The Light of the World will continue to shine brightly, and will shine into lives that perhaps didn’t even realize they were dark before. Now the Light of Jesus Christ will be able to shine.”