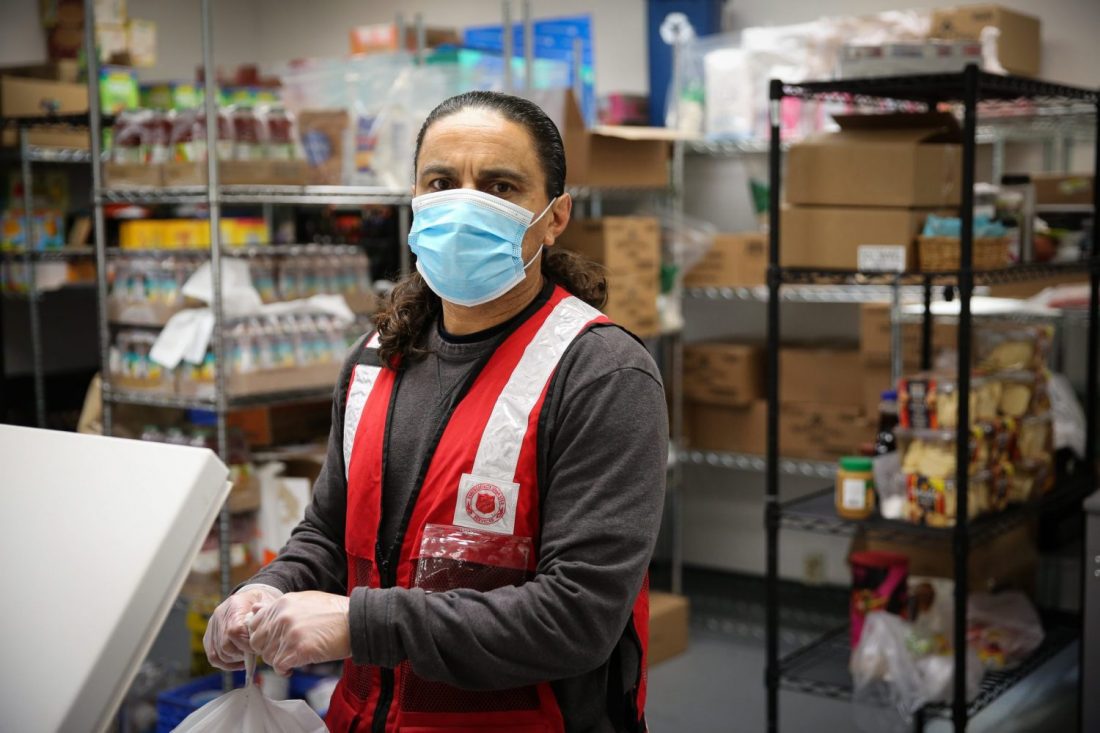 Western Territorial Commander Commissioner Kenneth G. Hodder held a teleconference meeting April 17 with members of the Territorial Executive Council, the 16th of such meetings regarding The Salvation Army’s response to COVID-19.

Divisional leaders and key staff joined the meeting from across the West by Zoom, and limited participants met in the Territorial Headquarters (THQ) boardroom while wearing masks.

Before beginning the meeting, Hodder acknowledged the Zoom background chosen by Hawaiian and Pacific Islands Divisional Leaders Majors Jeff and Eloisa Martin for today’s meeting—the Dome of the Rock in Jerusalem. Created by the Multimedia Department, the backgrounds are available on the Red Shield Toolkit.

After a roll call of command heads, Hodder shared five announcements, four of them expressions of appreciation. He thanked Captain Stephanie Dennis, Executive Assistant to the Territorial Commander, for preparing the minutes of each meeting. These have proved helpful to staff at both THQ and International Headquarters, and to local units through the commands.

Hodder thanked the Multimedia Department for their efforts in producing videos and getting out information about what the Army is doing. The department has produced a video every weekday since the emergency began—and it’s been a month. This is “simply unprecedented,” Hodder said. He asked everyone to share these videos as much as possible.

Hodder recognized the Northwest Division, specifically the Coeur d’Alene (Idaho) Kroc Center, which received a commendation from the Kootenai County Office of Emergency Management for the way they’ve responded to the pandemic. Hodder read from the proclamation, which included: “Without the invaluable help of The Salvation Army Kroc Center Coeur D’Alene…resources for first responders could have vanished…We at the EOC can’t say thank you enough to the countless volunteers at The Salvation Army Kroc Center, who stepped up to help us during our community’s time of need.”

Hodder expressed appreciation to the Community Relations Department for what’s being done in digital fundraising. The Army’s COVID-19 digital fundraising has nationally gone over $5 million, with the West currently leading the territories. Over $2.5 million has come in during the last month, and there is a combined increase from both national and territorial accounts of 526% over last year.

Next week, Hodder said, the West will intensify its efforts to reach the public to support The Salvation Army during this crisis. Ten temporary positions at THQ will reinforce the Community Relations Department. They will be reaching out to some of the 30,000 new major gift donors and will be helping resolve issues with the Walmart Gift Registry.

On Tuesday, April 21, there will be a special town hall/teleconference call for donors; 110,000 people are expected. Divisional advisory board meetings will take place next week, Wednesday–Friday. These will be 30-minute phone calls that will provide information and allow advisory board members to ask questions of both the divisional leaders and the Territorial Commander.

Finally, funds have been redirected from a supplemental information campaign through the Richards Group in the West to a COVID-19 recovery advertising effort. Next week, more Salvation Army advertising will appear on several platforms: digital, TV and social media.

Southwest Divisional Commander Lt. Colonel Kelly Pontsler reported that the service extension units in the division are stepping up to meet needs, often by collaborating with corps to deliver food and supplies. On Wednesday, 100 food boxes went to the Sedona (Arizona) Food Bank. They were assembled by the Prescott Corps and delivered by Divisional Service Extension Director Major Wayne Wetter, using a vehicle provided by the Sun Cities West Valley Corps. Maricopa County has approached The Salvation Army about providing meals to five shelter locations, which could represent a total of 300 people. This will probably begin next week with an initial run of 30 days.

The ACLU and the Florence Immigrant and Refugee Act Project are trying to get the release of about 100 migrant detainees who have crossed the border and are waiting to move forward, which is now more complicated than it was previously. They have approached the Army for help. This is in the beginning stages.

Senator Martha McSally’s 15 Days of Giving campaign brought in approximately $200,000 for the Army. Her team made four different site visits, offering help and encouragement to staff members. The Salvation Army will honor her for her efforts.

The Las Cruces (New Mexico) Corps was allocated $5,500 out of the $100 million gift toward feeding America from Jeff Bezos, CEO of Amazon.

In Anaheim, the store on La Palma has opened as a shelter. The Hillsboro store (Portland ARC) has been converted into a shelter; it will open this evening.

Other beneficiaries helped at the Inglewood Corps, preparing food boxes and cleaning and restocking the food pantry. The Riverside ARC packed food boxes for EDS and for the families of beneficiaries, including Easter baskets for those with children; this meant a lot to these families during Easter week.

The Las Vegas ARC held a Scripture scavenger hunt to celebrate Easter. They were also treated to a private display from the Air Force Thunderbirds.

In San Jose, the ARC set up Zoom meetings for families and a drive-through so families could receive Easter baskets for the children and a bag of essentials, including toilet paper.

“The variety of things the men and women are doing is really quite astonishing—a Scripture scavenger hunt, that’s a terrific idea,” Hodder said.

CFOT Principal Major Nigel Cross reported that it’s been a time of transition for cadets and staff, with cadets transitioning back to their lessons after an active time of working in the field with EDS. Next week, the cadets will assist the Community Relations Department with the donor phone calls.

The classes are all online now, and this is going well. Various technical issues have been worked through. Everything is on schedule for Commissioning and for the cadets’ summer assignments.

The big challenge right now for the cadets and their families is social distancing. Since they’ve been in the field among various people, they need to observe the social distancing mandate for 14 days. This is especially challenging in the Family Care Center, where the children have to stay in family groups.

Silvercrest Executive Director Susan Lawrence reported that another Silvercrest resident, in Albuquerque, has contracted COVID-19; however, it was a mild case and that person now has no symptoms. The manager there tested negative.

The focus for Silvercrest is on food safety and isolation of residents. There has been some push-back from residents regarding face covering, for instance, when they go to the lobby to get their mail.

They’ve been receiving food from the corps, divisions and EDS, so the residents are eating well. In Broomfield (Colorado), the corps officer connected with a volunteer chef who is coming in and cooking for the residents. He’s also donating the food.

To help with the isolation the residents are experiencing, Silvercrest staff are calling residents; cadets and officers are helping with this outreach. Easter bags were delivered to many residents. They were also invited to the territory’s online Easter evening service. The Silvercrest in Tulare (California) received a visit from the Easter bunny, who drove around the parking lot waving and calling out messages of good will at a safe distance. The Fresno Silvercrest enjoyed a live disco event from their balconies, DJ’d by one of the residents who has an extensive vinyl collection. “We tried to make Easter fun,” Lawrence said.

Hodder suggested that the cadets help with Silvercrest phone calls as well as the donor phone calls.

To close, Hodder read from Luke 18:35, which tells the story of the blind man who called out to Jesus to be healed. “Receive your sight. Your faith has healed you,” Jesus told him.

“There are lots of folks now who are crying out, just like that man was,” Hodder said. “Jesus’ response will always be the same to those cries. He will always respond, and he will always perform miracles in the lives of those who have sought him…If we make Jesus available, we will see miracles and we will see more and more people following him in the days to come.”

Hodder offered a prayer of gratitude, asking for strength and more opportunities to share the gospel.