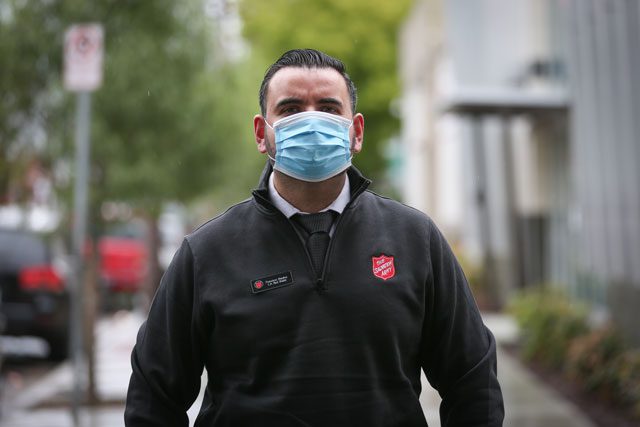 Western Territorial Commander Commissioner Kenneth G. Hodder held a teleconference meeting April 13 with members of the Territorial Executive Council, the 14th of such meetings regarding The Salvation Army’s response to COVID-19.

Divisional leaders and key staff joined the meeting from across the West by Zoom, and limited participants met in the Territorial Headquarters boardroom while wearing masks.

Hodder expressed his appreciation for the work being done in the territory’s COVID-19 response and reflected on the West’s Easter celebrations.

“A very busy weekend, and a wonderfully productive one for service and for worship,” Hodder said.

Moving into the day’s announcements, Hodder followed up on several development matters, including the upcoming deadline for AT&T gift reports, and a legislative update on COVID-19 from National Headquarters on how the Army can expand its reach during the COVID-19 crisis, especially through food and shelter. Advisory Board Member Michelle Kerrick of Deloitte will help the Army process the papers for this matter.

Leaders from the Alaska, California South, Cascade and Del Oro divisions then presented three-minute reports on the latest efforts.

Among the donations, the Alaska Division received $150,000 from the Murdock Foundation, and $35,000 from the Stroecker Foundation for Fairbanks. Additionally, two donors gave $10,000 a piece. The division is also in talks to be a recipient of other funds to be used as rental assistance across the state.

The state’s Department of Child Services contacted the Army to potentially provide housing for children who need to be quarantined away from their parents. The city of Anchorage requested to directly refer those who need assistance for addiction to the Clitheroe program, since the usual referring organizations are closed.

Brackenbury highlighted several of the division’s corps happenings from the last week: The Wrangel Corps has partnered with the Church of Jesus Christ of Latter Day Saints (LDS) for food distribution. The Fairbanks Corps gave Easter bags in the food boxes it distributed. The Hoonah Corps hosted a drive-in Easter service.

In Southern California, the California South Division has experienced a 75 percent increase in request for meals and food boxes, said Divisional Commander Lt. Colonel John Chamness.The Army is utilizing the Bell warehouse as an essential distribution point for all corps in the division along with Adult Rehabilitation Center (ARC) trucks and cadets to organize shipments.

The Army has been approached to reopen preschools for essential workers in its Tustin Ranch and Westwood locations. It continues to operate the program at the San Diego Kroc Center. The Hemet Corps held a drive-in Easter church service and had a packed parking lot.

Chamness announced plans for a virtual fundraiser in May, featuring weatherman Fritz Coleman, who will perform stand-up comedy.

Dihle said the division was also a recipient of $250,000 from the Murdock Foundation, as well as $20,000 from the county to go toward increased costs at the West Women’s Shelter.

Across the Cascade Division, the need for food boxes is up by 40 percent, Dihle said. A new partnership with CISCO has provided fresh food and a local distillery provided hand sanitizer.

In the Portland Metro area, it has been challenging for people to participate in social distancing, Dihle said. Because of this, the Army has requested help from the National Guard and are considering moving food distribution to a delivery model only. Three Cascade officers are in two-week isolation due to exposure to COVID-19 .

“The challenge in smaller corps is to keep the presence going,” Dihle said. “But we have been able to do it. We are hoping and believing they’ll be back to work soon.”

Del Oro Divisional Commander Major Ivan Wild shared that despite the continued increased need of food, the Army is meeting the demand across the division.

On April 9, the Army was contacted by Nevada County, whose representatives are considering using camp to isolate those experiencing homelessness. A pair of corps in Placer County will serve three meals a day for those who are in isolation at hotels across that county. In other counties in the division, the Army is working on a rental assistance contract and the collection of Personal Protective Equipment (PPE).

Wild said the division’s development team remains active, trying to raise funds. It is holding an online virtual food drive, and has received $300,000 in foundation-type gifts along with a large gift to keep the Adult Rehabilitation Program (ARP) going in Chico.

Hodder thanked all command heads and leaders for their work before reading from Jeremiah 17:7-8 and closing in prayer.

“As we continue to rely on the water that is the Word of God, the tree that is The Salvation Army will grow strong,” Hodder said. “When we place our trust in him…We can be assured a victory.”