The Salvation Army Winter Warming Shelter in Colorado Springs reopened for its second winter season with a handful of changes implemented in light of complaints logged by community members regarding loitering and trash.

Earlier this fall, the Downtown Revue Board approved the conditional use permit with a 5-2 vote, allowing the shelter to operate because ultimately the need for the shelter outweighs neighborhood concerns. Last year the shelter provided more than 20,000 beds over the course of nearly six months. In 2013, before this low-barrier shelter opened, two homeless men lost limbs as a result of frostbite they suffered on two brutally cold evenings.

“This shelter is an important piece of the bigger strategy and a way to get some predictability to the solution for homelessness,” said Downtown Revue Board member Aaron Briggs.

On average around 100 people have stayed at the shelter each night since it reopened, according to Major Richard Larson, the El Paso County coordinator for the Salvation Army. The facility provides bedding for up to 153 homeless individuals and restrooms.

To address neighborhood concerns, Larson implemented measurable and enforceable changes including asking people not to line up in front of the building until 6 p.m., additional staff, and cameras both inside and outside the shelter. The Salvation Army teamed with the United Way to use a new card system that should cut down on the waiting time to get into the shelter.

“We interview the client the first time they come in and ask them questions like, ‘What’s your name? Where have you lived? Why are you homeless?’” Larson said. “We put that into a program and issue them a card. Once we scan the card, we know who is in the shelter and they’re assigned a place to sleep and we can also keep track of who is moving around.”

Rather than having volunteers feed people in the back parking lot of the shelter located at 505 S. Weber Street, the Springs Rescue Mission is instead offering a meal at its facility, located less than a mile away, which also cuts down on people lining up early.

“Normally I would want to feed [people] at the shelter, but because of the concerns, we worked with the Springs Rescue Mission,” Larson said. “They eat around 5:30 p.m. there and then walk our way, so by the time they get here it’s around 6 p.m. and they start signing up.”

Through April 17, the shelter is open from 7 p.m. to 9 a.m., an additional two hours in the mornings.

“People were concerned there was no place for them to go and they thought it interrupted some of the traffic,” he said.

Each morning a caseworker will work with clients from 6 to 9 a.m., helping individuals access assistance services as needed.

“It gives them all night to sleep off whatever they were under the influence of the night before and they might be more receptive in the morning to getting help,” Larson said. He also added a staff member and security guard to each shift.

New signage outside the shelter asks people dropping off donations to bring the items inside the building. Previously, people would leave bags outside and others would go through them, creating a mess in front of the building at times, Larson said.

New security cameras are located both inside and outside the shelter helping to mitigate some of the thefts that happened among clients last year and prevent people from dropping donations off in front of the building rather than bringing them inside to be distributed, Larson said.

Since the shelter reopened there’s been one complaint that came in via email about a gentleman lined up at 4:30 p.m. on a Monday and a guy sitting outside with a backpack.

“It’s been very minor so far,” Larson said. “And the signage is there.”

Since the primary goal of the shelter is to save lives, the facility will continue to provide onsite kennels to encourage those with companion animals to take shelter on cold nights. The low-barrier admission guidelines remain the same as last year. Namely, residents must be 18 years or older and for safety purposes they must have some type of photo identification or obtain a referral (good for up to 30 days) from the nearby police station. Family accommodations will remain located at The Salvation Army RJ Montgomery Center, which accommodates up to 200 homeless people each night.

Neighbors can voice any ongoing concerns at a community meeting set for mid-January.

As for next year, the future of the Winter Warming Shelter is unclear for now.

“We’ve promised the neighborhood we wouldn’t open at this location next year so we might have to find another location to open a shelter,” Larson said.

The Springs Rescue Mission plans to open a 150-bed cold weather shelter that will be open year round, he said, but he’s not sure that’ll be enough. “Right now they run a 60-bed [shelter] and I run a 150-bed [shelter] so I still think there will be a need next year.” 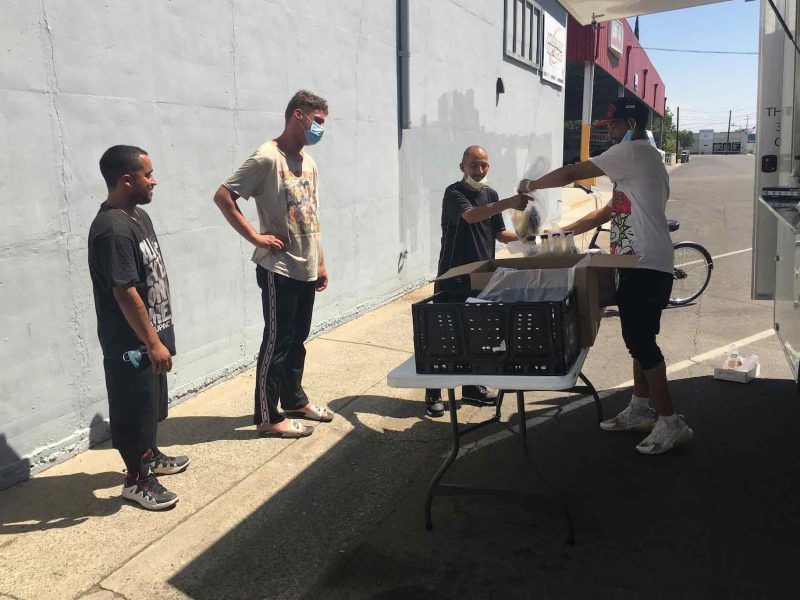