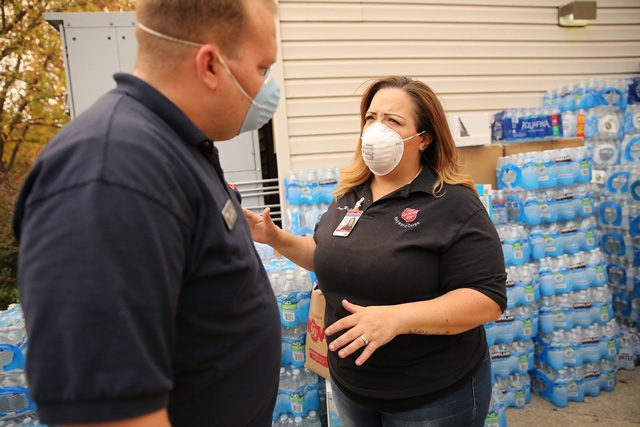 The blaze destroyed the program’s Paradise store and left more than a dozen employees displaced.

McDowall was forced to relocate with her husband and in-laws from Paradise to Newcastle after losing their family home in last year’s Camp Fire, the deadliest and most destructive wildfire in state history. She says she returned to work at the ARP because it’s “worth the drive.”

“I love what I do with these clients,” said McDowall, the facility’s women’s resident manager. “Especially now, they need the support and I need reminders constantly that we can change our lives no matter what the circumstances are. They do as much for me as I do for them.”

McDowall is one of 13 employees at the Chico ARP who lost their homes in the Camp Fire. Amid the chaos, employees—including those who were displaced—rallied together to keep the program going during and after the blaze for the good of the community.

“This is just an example of The Salvation Army having some of the best employees in the world. Instead of worrying about themselves, they were worried about others and they came together with us to make this whole thing work,” said Major Ray Yant, Chico ARP Administrator. “It’s very heart touching and very moving for sure.” For many employees, coming back to work at the ARP was never much in question, despite the personal loss involved.

Amber McErquiaga lost her home as well as her place of employment after the Camp Fire destroyed The Salvation Army Family Store in Paradise. Even though finding housing in the area has been a struggle, she accepted an offer for continued employment at the Chico ARP donation warehouse and lives in an apartment with her two kids until she can find a new house to buy.

“I had only worked for The Salvation Army for a year but I felt like it had become my family,” McErquiaga said. “Making myself get up in the morning and go to work and do everything I need to do to support my family and keep life going…is what keeps me from feeling sorry for myself. I still talk to my coworkers about the things that are happening every single day. They all understand. I feel comfortable here.”

Jodene Setera, the Chico ARP office manager, noted the level of need in Chico was simply too high for her not to come back.

“The fact that we were in a crisis personally doesn’t affect the fact that there are people who have been waiting to get into rehab. They’re willing in that moment. And that window of opportunity to help people is really small,” Setera said. “People relapse. People get incarcerated. Families are torn apart. More damage can be done in a matter of hours. If we stop our services at any point, then it can have catastrophic effects on the community and the people we are trying to serve.” Some beneficiaries were affected by the Camp Fire, too. One even lost her grandparents and uncle. Yet many of them were also on the frontlines helping with response efforts.

“They had the same opportunity to help in the heat of the crisis,” Setera said. “They stayed working. They were able to see the fruits of their labor, and see how many donations were coming in from all over the world. There’s a certain amount of hope generated when you see this outpouring of generosity and help.”

The impact has also been felt on the ARP itself, as it recovers from the loss of income from the Family Store that burned down in Paradise as well as employees who have had to move after the fire. The ARP housed Emergency Disaster Services (EDS) staff and volunteers and handled Camp Fire donations during the emergency response period. Its leadership even secured employment at its warehouse and remaining stores for employees of its Paradise facilities who stayed in the area.

“It was just a lot of all hands on deck. How do we staff a 24-hour program when we have employees displaced? We just did what needed to be done,” Setera said. “We were doing our best to keep classes going, counseling going. We always made sure the quality of our program wasn’t diminishing due to the crisis.”

Setera hopes that in the future there will be an opportunity to open up another Family Store for the Chico ARP. But for now, the staff and beneficiaries are simply helping one another move forward.

Meanwhile, Camp Fire recovery efforts continue at The Salvation Army in Chico, as part of a two-year recovery plan. Services include rental and relocation assistance and the replacement of furniture, household supplies, car repairs, work tools and more. Those in need of help can call 1-833-372-2267 Monday through Thursday, 9:30 a.m.–noon.