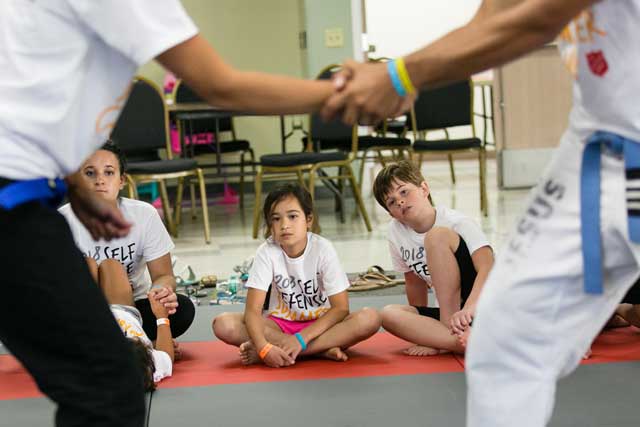 Captain Thais Viana is trapped in a headlock in the center of a large mat with campers lining the edge. She asks the kids to recall the steps they’ve learned on how to get out.

Once Thais breaks free, the kids partner up and try the move themselves. The room erupts into the joyful sound of steps and giggles. Thais and her husband, Captain Rafael Viana, are in the fray along with volunteers from their gym, helping campers with technique and offering encouragement.

While they’re practicing, Thais heard something she didn’t like, and had everyone take a seat.

The statements serve as a teaching moment: no matter who you are, you can do it. 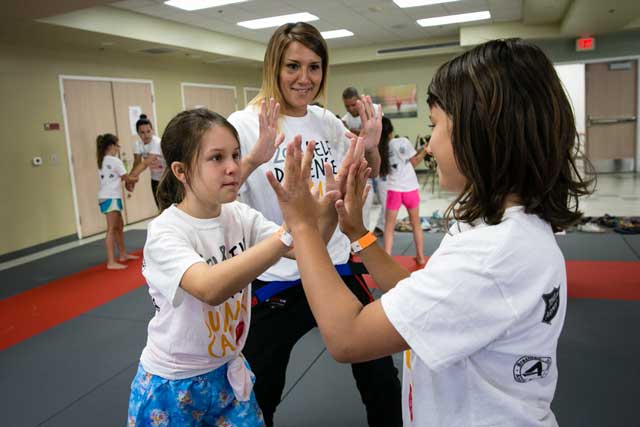 Brazilian jiu-jitsu has given the Vianas opportunities to share spiritual truths, like this one, both in the Redondo Beach (California) Corps, where they are officers, and throughout the world.

The Redondo Beach Corps hosted a free kids’ self-defense camp July 9-13, a long-held dream of Rafael, who has practiced Brazilian jiu-jitsu off and on for 18 years.

“The goal is really to do character building. To focus on building self-esteem, to give them confidence, to have them just stand in a posture that when they face situations in their lives they know how to make a decision, they know how to stand up for themselves,” Rafael Viana said. “Also to insert the aspect of their faith for them to know that they are not standing by themselves, in front of this situation, but there is a God who also will help them through it.” 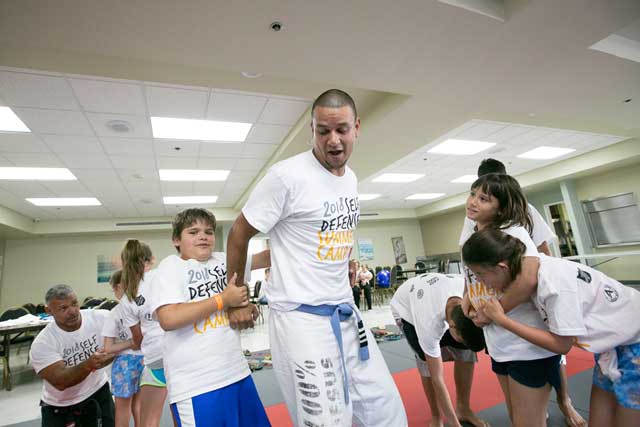 During the week-long camp, more than 25 kids from the corps and the community under the age of 12 came together to learn self-defense techniques and hear testimonies before eating lunch and going home for the day. After Rafael shared his testimony one day, he decided to have an altar call on the mat. He said seven kids raised their hands to either accept or recommit themselves to Jesus.

One of the campers who accepted Jesus, a 9-year-old named Braydon, received a Bible from one of the corps’ mission team members.

The next morning his grandmother came in and told Rafael, “He came to me yesterday and he said he actually went to read the Bible and he prayed. But he thinks that he needs a little bit more help, so he said he’s going to ask his father to start reading the Bible for him and try to explain.”

Viana said Braydon’s parents are not Christians. He said he planned to have a Bible for Braydon with his name on it before the end of camp.

“It was just awesome to see that not only that kids want to come back the next day to learn more to have fun, but they are thirsty to hear about the spiritual truths of self-defense,” he said.

These truths—like guarding your heart—permeate the daily self-defense drills and have resonated in the kids’ hearts, too.

“I think it was a very good week-long program for the kids to learn about the respect and learning a little bit about God,” said Patricia Guerrero, Braydon’s grandmother. “I like how they work out with the kids and I just think it was great.” 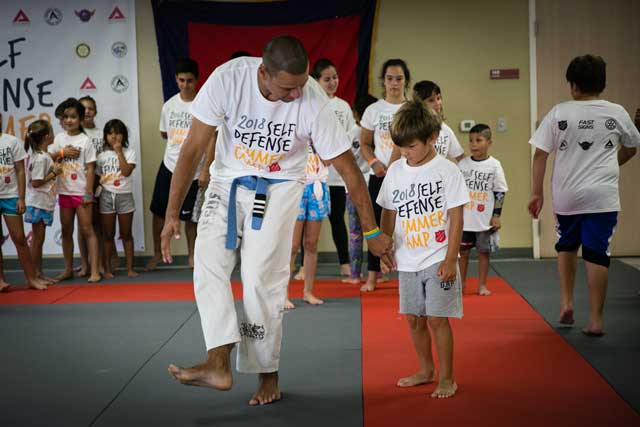 This isn’t the first self-defense camp Thais Viana has facilitated. After beginning her jiu-jitsu journey two years ago to get in shape after giving birth to her fourth child, she won silver at the 2017 Sport jiu-jitsu International Federation World Championship, and channeled the passion to help others through self-defense.

A seventh-generation Salvationist, Viana watched her officer parents “be creative” throughout their officership. After moving to Redondo Beach from Massachusetts last July, she got to think outside of the box, too, when she was elected peace chair of the Redondo Beach Rotary Club.

With the role came a project of her choosing. It had to be aligned with her passions and it had to be in either Mexico or Fiji, where Rotary had a strong presence.

Viana connected with the Suva Central Corps in Fiji, where The Salvation Army works with vulnerable youth who have either experienced or are at-risk for sexual abuse. Thais said 80 families live in the Army’s safe houses there, but they serve about 300 youth in the area.

She put together a team for her peace project—a self-defense camp aiming to teach and promote peace, discipline, respect and anti-bullying, among other virtues—and they flew to Fiji. 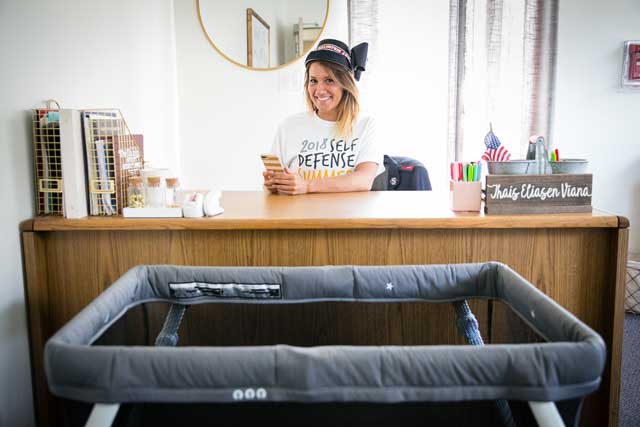 Officers wear a lot of hats. In Thais’s office, you can find her grandmother’s bonnet resting near a crib for her youngest child. In the corner is a trombone she’s learning how to play.

“On our first day we would hear things like, ‘I can never do this. I can never escape in a dangerous situation with these techniques because I’m small, because I’m a girl,’” Viana said. “We were there to tell them, ‘No, no, no.’ I have four children, three of them are girls, and I tell my girls all the time that I was looking at those girls and thinking, ‘You could be my daughter,’ and what I’m telling you is: ‘Yes, you can. Don’t ever think that you can’t because you can.’”

The Fiji Times reported participants were given a book about self-confidence and anti-bullying through the principles of Brazilian jiu-jitsu to reinforce the teachings of the camp. Spiritually, Viana emphasized three areas: to guard our hearts because our lives depend on it, to not let sin dominate us; we’re strong in Jesus and to be prepared with the armor of God.

“I took a deep breath on the last day as I was looking at those girls’ faces and seeing tears rolling and just seeing them breathe in and change their posture, put their shoulders back and their heads high and you could tell that they believed then that they could do it, not just in the self-defense, but in life. That was truly a gift,” Thais said. “I remember thinking, even if it was for the one, for the two, for the three, for the five girls that we clearly saw that change in their bodies as we’re watching them, it was worth the whole way there to do this.”