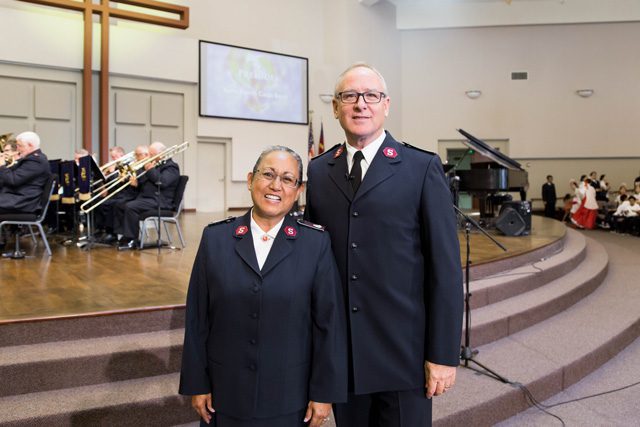 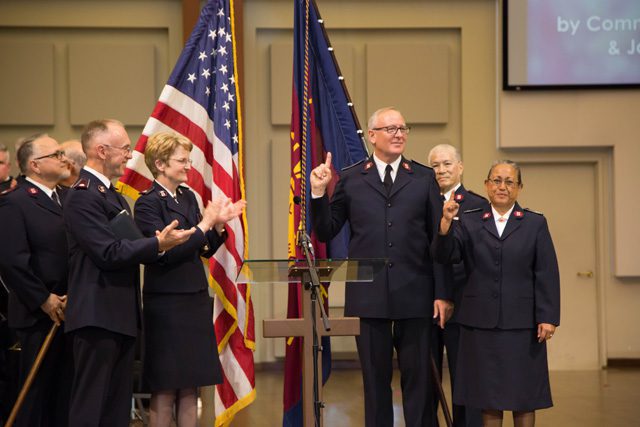 After a call to worship by the El Cajon Corps Drum Line and the Los Angeles Korean Corps Fan Dancers, California South General Secretary Major Osei Stewart greeted the the congregation in some of the languages native to the area’s constituency: Korean, Chinese, Spanish and English. As he spoke of two great divisions—Southern California and Sierra del Mar—coming together, he referred to Psalm 96, Sing to the Lord a new song.

“The making of this appointment has been in accordance with God’s direction,” said Kenneth G. Hodder. In response to his questions, the Chamnesses declared that they would rely upon God’s guidance in the performance of their duties, and promised to make the mercy seat the focus of their ministry. 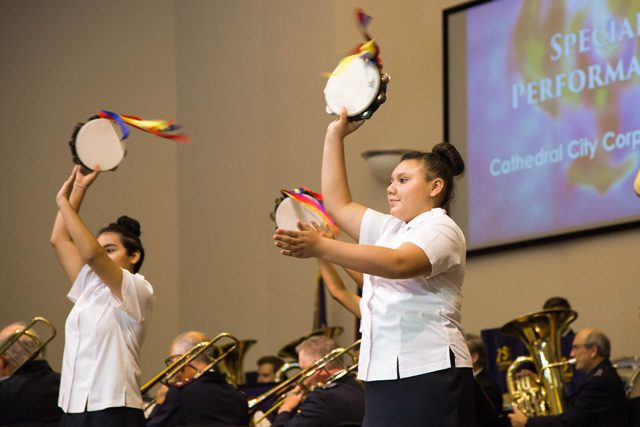 Jolene K. Hodder offered a prayer of dedication over the leaders and the division.

Words of welcome followed from an officer, Captain Aurelio Ambriz from the San Pedro Corps; a senior soldier, Chris Toy from the Whittier Corps; and a junior soldier, Trinity-Joy Butler from the El Cajon Corps.

“What do the soldiers of the California South Division strive for; what do they yearn for; what do they need? Toy asked. He referenced Ephesians 4, which speaks of unity in the body of Christ. He emphasized unity of the spirit through God’s peace as the Chamnesses lead the division in saving souls, growing saints and serving suffering humanity. 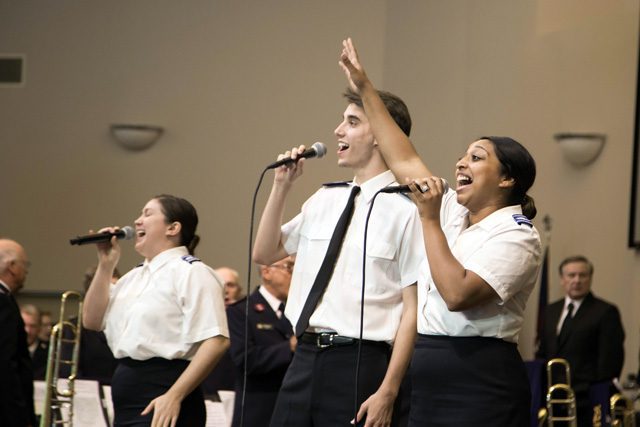 Butler had a few suggestions for the Chamnesses, including a request that she be made captain for a day, allowing her corps officers to take a break. She then presented her resume to the Chamnesses. She asked them if they were frightened as they undertake their new appointment, and counseled them to trust in God and his plan for them. She also recommended visiting Disneyland.

Divisional Youth and Candidates’ Secretary Captain Michael O’Brien acknowledged the accepted candidates from California South; the Chamnesses prayed with them, committing them to the Lord. 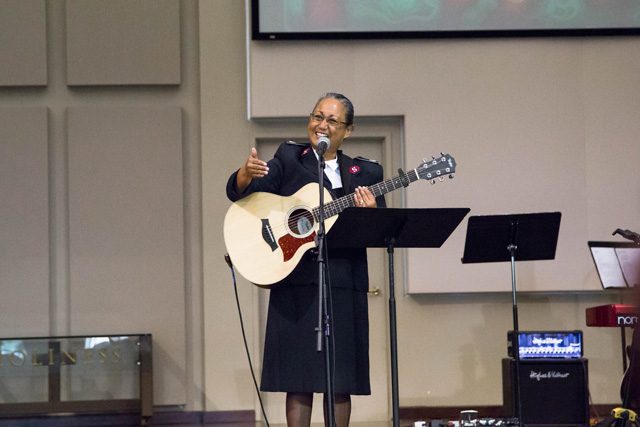 With guitar in hand, Lani Chamness took the stage. Before performing, she spoke about the encouragement she finds in Romans 8; she said she turns to that chapter when she needs to recenter her heart and mind.

In his message, John Chamness spoke about how he came to The Salvation Army through an invitation, and how he entered training “very green.” He felt “in over his head” and calculated how long it would take him to drive back to his native Seattle—then he met Lani. That sealed the deal. 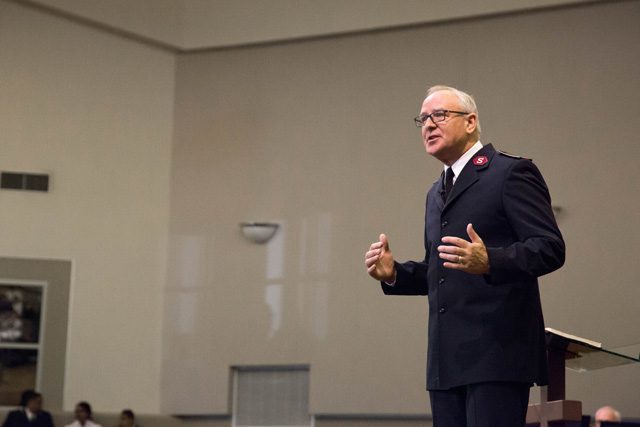 Now, despite many years of experience including most recently as Divisional Commander of the Hawaiian and Pacific Islands Division, Chamness said he felt the pressure of this new appointment.

“As Commissioner read the words of the installation, I went from 6’1” to 5’3” because of the weight of those words, the responsibility,” he said.

“Then God reminded me: ‘John, it’s not through your work, your efforts… It’s through my power that you will accomplish this.’”

He, too, referred to Paul’s words in Romans.

“God’s love is limitless,” he said. “Nothing can separate us from the love of God in Christ Jesus.” 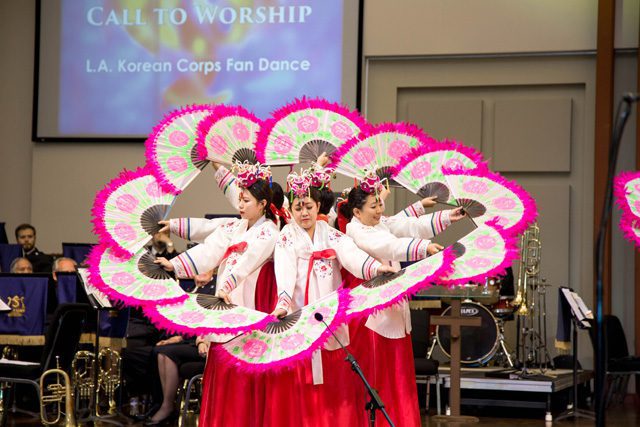 He called the congregation to action, noting that the world needs The Salvation Army to be bold risk-takers in addressing society’s needs. Referencing John 9:4-5, he said Salvationists need to feel a sense of urgency in their work for the Lord, getting out of the halls and back into the streets. He called listeners to live sacrificial lives, to give up comfort and privilege for the sake of others.

“I am convinced that God is calling us in new directions—the world needs us desperately,” he said.

In conclusion, he returned to the present reality of two divisions becoming one.

“Were we ever really divided?” he asked. “No, we are united in Christ.” 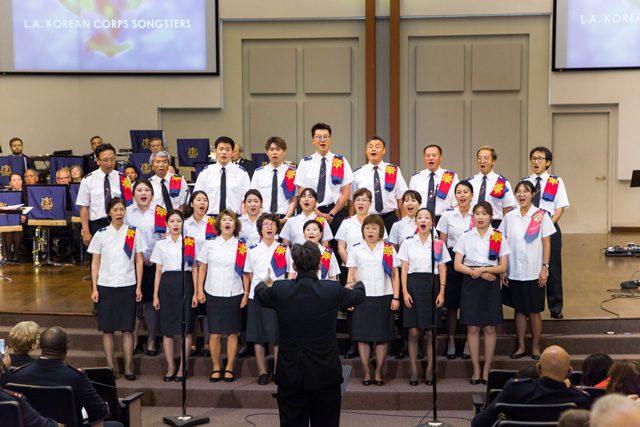 Chamness offered a prayer of gratitude to God for the California South Division and its people before Lt. Colonel Michele Lescano, Women’s Auxiliaries Liaison for San Diego County, offered a final benediction.

The service included performances from the Cathedral City Corps Timbrels; the LA Korean Corps Songsters, who sang in Korean; and the Divisional Corps Singing Company. Hannah Danielson and a team from the Pasadena Tabernacle Corps led praise and worship, and the Tustin Ranch Corps band, led by Bandmaster Ed Freeman, provided music throughout the service.