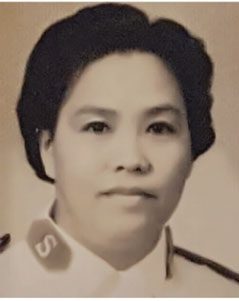 Captain Buenaventurada “Buena” Opina, 95, was promoted to Glory May 20 in Hemet, California. One of five children, she was born July 14, 1924, in Cebu, Philippines, to Fabio and Francisca (Alesna) Navarro.

Buena grew up in Carcar, Cebu, and followed in the footsteps of her parents who pioneered The Salvation Army in the Philippines in the late 1930s. She accepted Christ at an early age, became a junior soldier at age 12, and subsequently a senior soldier. Buena’s involvement in the Army continued through World War II, as the Navarro family conducted prayer meetings at camps during the occupation.

After the war, she entered The Salvation Army Training Institute as a member of the King’s Messengers Session, and was commissioned as a Salvation Army officer in 1948. In her first assignment as an assistant corps officer, she met her future husband, Cupertino Opina, who soon thereafter entered the Training Institute. Upon his completion, they wed in April 1953. Various appointments took them throughout the Philippine Islands as corps officers. They last served as Tondo Corps Officers, in Manila, in 1970.

In 1971, the family immigrated to the United States, and assisted at the Koloa (Hawaii) outpost. The following year, they moved to Oahu, Hawaii, where Buena worked in the hotel industry. In 1985, Buena moved to San Diego to be with her children and grandchildren. A few years later, Cupertino followed, and they devoted their time to helping care for their grandchildren. In 1994, the couple finally moved to their retirement home in Murrieta, California.