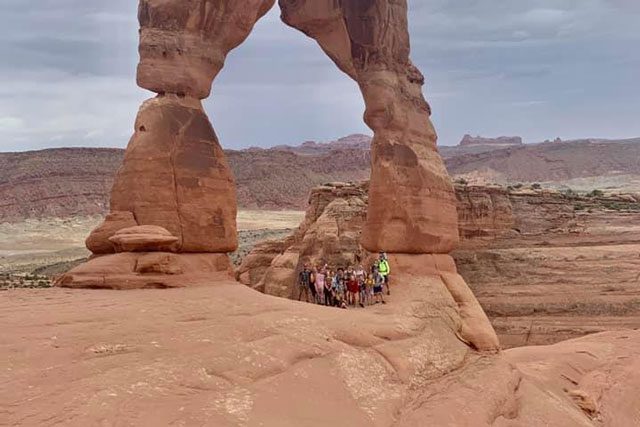 Cadets think outside the box for 2020 summer field assignments

For the cadets of the Messengers of Grace Session, their 2020 summer assignments were anything but ordinary.

“The only thing we could expect was the unexpected,” said Cadet Amber Herzog about the six-week appointment in the field. With the pandemic impacting traditional summer programs, the cadets had to think outside of the box.

“We were forced to look at our assignments with new eyes and because of that, we were able to see opportunities we may have missed if the obvious ways of completing the assignments had been available,” she said.

Herzog, with her husband, Cadet Jonathan Herzog and their daughter, traveled to the Grand Junction (Colorado) Corps, to serve with Corps Officers Captains Amber and Joe West.

“Two of the biggest highlights from our summer were only possible because of the restrictions COVID had created,” Herzog said. The Herzogs brainstormed with the Wests, and came up with adult Vacation Bible School (VBS) and an overnight camping trip with a small group of teens.

“God opened the door for us to do an adult VBS with all of the staples: skits, worship, Bible stories, a craft, food and games,” she said. “We had so much fun and it allowed us to reach out to those living in the margins in the area with a relaxing afternoon filled with the gospel message. I don’t think I will ever look at VBS the same—I was so blessed by the experience.”

Traditional Salvation Army summer camp was also not an option this year, but the opportunity for the camping trip came when previously closed camping sites reopened.

“Being able to connect with teens who don’t normally spend a lot of time outside as they learned about responsibly and safely spending time in the great outdoors while contemplating about our God the creator of it all is an experience we won’t forget,” Herzog said.

The excursion, led by Intermountain Divisional Director of Outdoor Ministries Mitch McWilliams and the Wests, had been postponed from an earlier date due to the shutdown.

“This summer looked nothing like we expected,” Herzog said, “but it was exactly what God had planned for us and we wouldn’t trade the experiences we have come away from it with.”