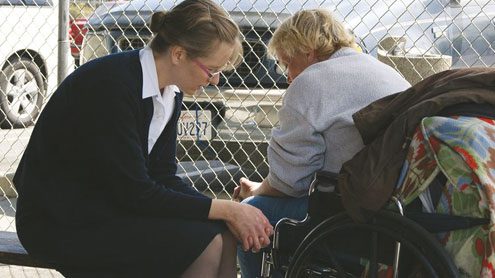 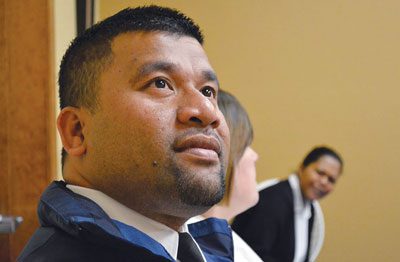 The Western Territory’s 120 cadets, as part of their field training at the College for Officer Training at Crestmont, gained program experience and sharpened ministry skills at 40 corps and units April 1-8. They led and preached in 18 worship services, conducted corps programs, taught Bible studies, and participated in children’s ministries, community outreach, service projects and nursing homes. Most importantly, the cadets shared the transforming love of Jesus. Here are a few of their stories. 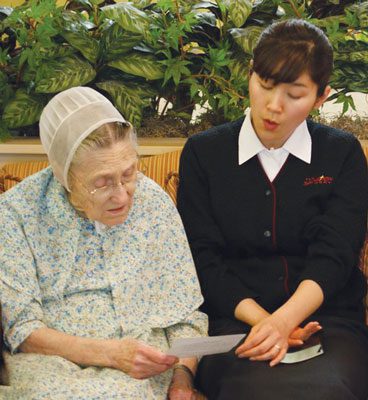 “We [cadets] have discussed and debated the relevance of social services and the lack of a Christian influence in many Army social service programs,” Cadet Joshua Hamilton said. “But today, I was able to see the value of having pastors present in the social services lobby, talking and praying with people.”

“Devoted” brigade—In Watsonville, Calif., cadets participated in feeding the homeless, an evangelistic campaign, Home League, united meeting and leading praise and worship in English and Spanish. Their faith was stretched when, after long, hard preparation for the “Superhero Day Camp,” the opening moments saw only four children…then nine…then 12…and by week’s end, a total of  50 contacts, with 10 children accepting Christ.

Cadet Susan Cassin describes a pivotal moment when the brigade conducted a nursing home meeting. “As we passed out socks to the residents, I came upon Marguerite sitting in her wheelchair,” she said. “As I got down to her level to talk to her, I don’t think I’ll ever forget the moment of pure joy in her eyes when I began to talk to her…God reminded me in that moment that it is the people that matter. You can have all the programs in the world, but if you don’t care for people—if you don’t do it out of love—then it is worthless.”

Before the cadets departed for Yuma, they had received specific prayer requests for Yuma corps members. At week’s end, Cadet Regina Verdugo testified, “God showed himself faithful in answering prayer and allowed me to be a part of what he was doing in this family’s life. What a blessing!”

“Unified” brigade—In Boise and Caldwell, Idaho, cadets visited veterans, dressed up in fashion runway attire for a women’s high tea, poured beverages at a mother/daughter tea for teen mothers from the Marian Pritchett School, barbequed for a carnival and made popcorn for family movie night.

Cadets discovered the influence of wearing a Salvation Army uniform. “We have been stopped several times this week by people who recognized the uniform,” Cadet Joe West said. “Most of them were givers. All were very grateful.” 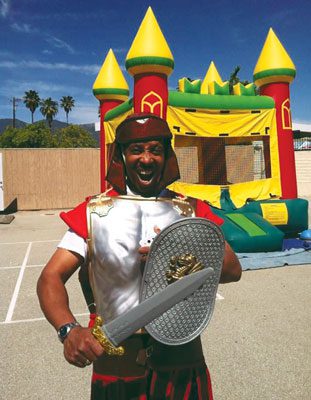 While feeding the homeless, the cadets met Jerry, who had been on the streets for years and wanted to be back in a home. A cadet invited him to the adult Bible study, and Jerry showed up. When asked how he came to be there, Jerry said, “I was invited.”

“Sometimes that’s all that has to be done,” Cadet Katie Breazeale said. “We have to just ask. Because of one cadet’s bravery, Jerry was found and brought into the corps where he was accepted, given a hot meal and a chance to hear the Word of God.”

Reflecting on a nursing home visit, Cadet Daisy Gaytan said, “It wasn’t the gifts that we brought that made a difference; it was the presence of someone who cares. Their faces lit up when they saw our faces, when we drew closer, when we gently touched their hands, when we said ‘hello.’ It was a beautiful reminder that the ministry of presence is important. It’s not who we are, but the love of God that shines through us and his rays of love that touch those around us.”

“ILKOP (Seven)” brigade—In Modesto, Calif., cadets observed the Modesto Advisory Board in action, serving as security for the transitional shelter program by manning the metal detector, breathalyzer, and contraband search, then switched roles to serve a hot meal along with the Word of God to the clients.

Cadet Hye-Mi Lee, from Korea, shared her struggle with communicating in English. Tasked with leading the closing song, “Amazing Grace,” at a nursing home, she sang nervously, and then noticed an elderly woman next to her shedding tears. She learned that the woman had wanted to go to church but couldn’t, and was grateful for the worship time. Lee prayed for her in English, then Korean, and both women shed tears, realizing that the love of God transcends language barriers.

“Unity” brigade—In Oahu, Hawaii, cadets ministered at different Army facilities: preparing Camp Homelani for summer by cleaning out the cabins and tarps, “talking story” with the Revolution Hawaii team, leading and preaching at the ARC chapel, serving at adult day care and the Kroc Center preschool,  and conducting a worship service on the beach.

At the Kauluwela Corps’ Upper Room service, Brigade Sergeant Cadet Troy Cook watched a man approach many people wanting to talk. He didn’t connect with anyone and appeared mentally disabled.  Later, Cook approached the man, and discovered he had a speech impediment and just wanted to share his story. After prison, he had entered the ARC, where a tutor taught him to read the Bible, which he carried everywhere. “God used The Salvation Army to help this man learn how to read,” Cook said. “The only book he wanted to read was God’s Word.”

“Heirs to the Throne” brigade—In Seattle, cadets served at the Seattle Temple Corps, Seattle White Center and the Federal Way Corps. They sang songs and played Bingo with seniors, talked to people in the food pantry line, played basketball and volleyball with youth, picked up kids for the after-school program and assisted them with their studies.

The cadets reexamined their thoughts about homelessness after interacting with men at the William Booth Center. “The homeless population is so often looked at with disgust or loathing, but I don’t think they planned on their lives being this way,” said Cadet Brenda Morthland. “I became convicted of not loving all of God’s people. These are the people that Jesus would be hanging out with, walking with, talking with and healing. These are ‘the least of these’ that Jesus refers to. These are the people that we are called to love.”

Cadet Judah Young was apprehensive before giving his testimony at the correctional facility, worried that the residents wouldn’t relate to him. As he shared his story he felt God’s Spirit speaking through him. After the meeting, one young man, facing 18 years of prison time, sought him out. He wanted what Young had, and the cadet led him to make a decision to give his life to God.

“This was one of the most amazing experiences of my life,” Young said, “and I am honored and humbled that God would choose to use me.”

“The Less Than” brigade—In Santa Barbara, Calif., cadets led worship at an Alzheimer’s Care Home and chapel services at the Hospitality House, made vacation Bible school props, served soup and bread to those on the street, and held a day-long carnival for 100-plus visitors.

“While I was sitting with the after-school kids, a couple of them discovered that when they touched my hand a white imprint lasted for a few seconds. …I informed them this was because I was dehydrated; I had not had enough water that day,” Cadet Rebecca Lewis said. “Before I knew it one boy, Christian, had brought me a cup of ice cold water. Sometimes I hear of or even see a need and do not respond to it. This 7-year-old heard about something lacking in my life that day and provided it, blessing me with the best cup of water I had all week. It reminded me that the simplest act—no matter how simple—can make a difference.”

“Last” brigade—In Denver, cadets ministered at 18 corps and facilities, and led four worship services in the Metro Denver area. They handed out sandwiches and visited with homeless people, led vacation Bible school outreach at the Denver Red Shield, and participated in youth and ARC programs.

One assignment found the cadets at a shopping mall with $5, tasked with engaging someone in conversation and inviting him or her to have coffee or a drink. Cadet Caleb Montes stopped at a sunglasses booth and initiated a conversation with the salesman, Jeremy, who began to open up about his life. He had quit his previous job and sold everything to move to the mountains of Colorado, seeking purpose. They continued to talk for an hour and the cadet shared God’s hope, love, purpose and salvation. Montes bought Jeremy a cup of coffee and Jeremy accepted the cadet’s offer to pray for him.

“I have to admit some pride in being a part of an organization that reaches out without care of who you used to be and helping you help yourself to a better life,” said Cadet Edith Dye-Mabie. “What a testimony to God’s amazing power that his presence alone overcomes the boundaries of what is allowed because of government regulation and shines through those who have found hope with help!”