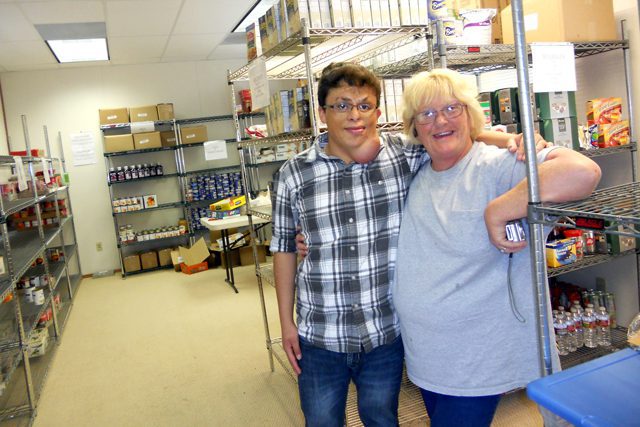 A volunteer connected a young burn victim to medical care and The Salvation Army, and both found aid.

Jose Manuel Roman has had so many surgeries, he’s lost count of the exact number.

When Roman was just 2 months old, living in rural Mexico with his family, he was burned in a house fire.

“Whenever a thunderstorm would come, the lights would go out,” he said.

So his mom lit a candle to light the dark room.

“It was right by the window and it was windy,” he said. “The candle fell over and the room caught on fire.”

The burns on his face and left hand were so severe that no one was sure he would live. The skin grafts he received after the fire did little to fix his disfigurement.

When Roman was 7, his family moved to Vail, Colo., where they shared a tiny apartment in a rundown motel with another family. Local resident Barb Richardson and her husband, Herb, first met Roman and his family while delivering Adopt-A-Family gifts through The Salvation Army.

Barb Richardson knocked on the door and Roman answered.

“He was such a little kid,” she said. “It just broke my heart. I said, ‘I’m Santa Claus,’ and he got these big eyes. He said, ‘Do you have anything for Jose?’ and I looked and I said, ‘You know what? I don’t, Jose, but that doesn’t mean you’re not going to get anything for Christmas.’ He just looked at me and said, ‘It’s OK, lady. Santa didn’t come last year either.’”

The couple went to their Jeep and wrapped a few of the extra toys they had. They returned to the door, and Jose answered again.

“I said, ‘Santa Claus has these presents for you, and for your sister, too,’” Barb Richardson said. “He turned around and gasped and said, ‘He found us, he found us!’ I will never forget that as long as I live.”

The Vail Valley Salvation Army helped cover the family’s traveling expenses—providing funding for lodging and food each time they traveled to Texas, anywhere from one to three times a year. Over the course of 11 years, Roman had multiple surgeries on his nose, lips, ears and eyes.

“When I first met him, his little face was so drawn,” Barb Richardson said. “His eyelids, the lower lids, were protruding outward from his eyeball.”

“I couldn’t close my eyes when I slept,” Roman said. “They were getting too dry. The skin was pulled down from the scars. They were getting really messed up. The doctor said I was going to go blind within the next six months or so [without the surgery].”

Barb Richardson spoke with the surgeons following that first surgery.

“The doctors said if we had not gotten him down there when we did, he would have lost his sight from a bacterial infection,” she said. “And as he grew, he would not be able to open his mouth as he should. It all fell into place. I have to give thanks to God.”

“She’s helped me and my family out so much,” he said.

Roman’s parents were so grateful to the Richardsons that they named their third child after Barb.

“We were facilitating God’s work,” she said. “That’s the only thing I can say.”

Roman, now 21, had his last surgery three years ago, at 18. A balloon was implanted beneath his jawbone and a local doctor pumped saline into the balloon each week for six months, to slowly stretch the skin. The idea was to use that skin to replace the badly scarred skin on half of Roman’s face. In the end, the skin was rejected, Roman said. “It wouldn’t heal the way it was supposed to.”

Still, when Roman looks in the mirror now, he likes what he sees.

“I look good. I see myself and I look good and that’s how I feel,” he said. “I look really good compared to the kids at the hospital—I have hands, fingers; I have a nose, my ears; I can see.”

“Maybe it’s because I love him, but I find him to be the most handsome man,” Barb Richardson said. “And it’s like ‘pick a number’ when it comes to girlfriends. I’m so happy for him, I can hardly stand myself.”

“I don’t think about why this happened,” Roman said. “I’m thankful it happened because I’ve met so many great people on this journey.”

Following his high school graduation, Roman became a Certified Nursing Assistant and worked at Roundup River Ranch, a medical camp for children with life-threatening illnesses. He now works for Home Care and Hospice of the Valley, and often volunteers at The Salvation Army Vail Service Extension Center. His family, including Barbie, 11, also volunteer.

“[Jose] can start out a bit shy, but he warms up quickly,” said Tsu Wolin-Brown, center coordinator. “He’s just a great guy.”

Unbeknownst to him, Roman helped Barb Richardson heal as well. She first met him while recovering from a stroke.

“[Jose] was the best medicine I’ve ever taken in my life; that little boy and that family,” she said. “If people only knew what The Salvation Army did and does for so many people in need, they would just be dumbfounded.”