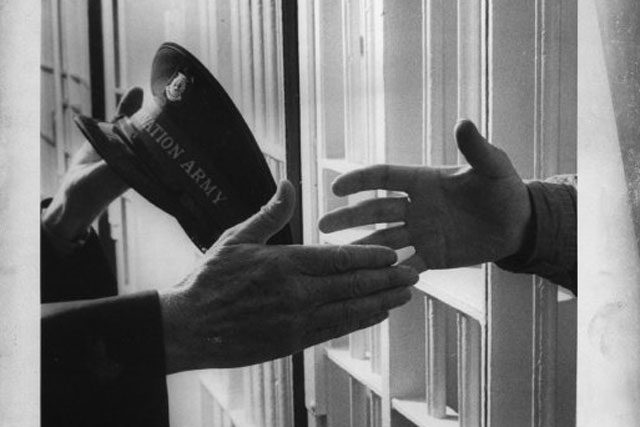 The evolution of the Army’s prison ministry in the West from its start in 1885.

Among The Salvation Army’s programs to help people whom society seems to have forgotten is its correctional ministry. Over time this ministry has evolved, as the priorities and purposes of the United States criminal justice system have changed. What has remained constant is the dedication of the officers and soldiers engaged in this unique outreach.

For The Salvation Army in the West, this work began in 1885 with the Brighter Day Brigades, which aimed to reform inmates through practical expressions of Christ’s love. The name described the focus of the Army’s ministry—to provide a brighter future for inmates after their incarceration.

Before the 1920s, most of the West’s prison systems focused on incarceration as punishment, so the Army’s approach to reform inmates differed from these more punitive methods. Salvation Army programming focused on helping the inmate change while still locked up. A successful expression of this approach was the San Quentin Corps, which operated inside the walls of one of California’s most notorious prisons.

As the 1920s progressed into subsequent decades, the correctional philosophy of many states—including California—changed from prison as mere punishment to prison as a vehicle for inmate reformation. The Salvation Army’s role changed as more states adopted this ideology of reform. Several prisons began employing full-time chaplains who arranged services for inmates. The Salvation Army did not provide many chaplains to the prisons but did start coordinating efforts with the prison systems.

Following World War II, The Salvation Army in the U.S. adopted the name “Correctional Services” for all prison and inmate work. Officers assigned to this ministry visited inmates, conducted services and provided for inmate needs by working with the institution’s chaplain. This name change also marked a shift in services available for families of inmates, such as toys for inmates’ children at Christmas, or helping reconnect family members.

The reports of Majors Gerald and Suzanne Hill, who served as California Correctional Services Officers in northern California and northern Nevada (1986-1992) provide rare insight into this ministry.

“Many men find Christ in jail or prison and many men have told us that they consider prison a blessing in their lives because they found Christ there,” they said in one report.

The Hills would often travel up to 4,000 miles a month visiting institutions from San Quentin near Oakland, California, to the Northern Nevada Correctional Facility in Carson City, Nevada. As itinerant pastors to inmates across 35 different facilities, they would conduct services and provide assistance in a variety of ways.

“I was very surprised when I came in a few minutes before 9 a.m. and saw him [Gerald Hill] preaching to the men when I thought he was doing a class in the education department, but in The Salvation Army you have to be ready to preach, pray or pass away at a moment’s notice,” Suzanne Hill wrote.

The Salvation Army Correctional Services, from its beginning to the present day, seeks to encourage individuals behind bars with the gospel of Jesus Christ and to help meet their practical needs.