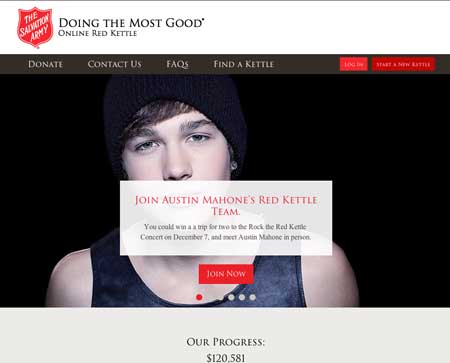 Alexandria, VA (November 14, 2013) – It’s time to Rock the Red Kettle this holiday season with the fourth annual free concert hosted by The Salvation Army and produced by Ned Specktor of Specktor Media. Music veteran Kelly Rowland will kick off the concert at Universal CityWalk’s “5 Towers” concert venue in Los Angelesby celebrating the work of The Salvation Army before turning over the mic to hot new artists Bean, Coco Jonesand headliner Austin Mahone.The free concert will take placeon December 7 at 5 p.m. PST and be streamed live on the Salvation Army Tumblr page.

Recently, Mahone gotto hang out with kids at The Salvation Army Miami Shelter. During his day of service, Mahone kicked off the holiday season by helping the kids decorate the shelter for Christmas, and he left behind a few gifts of his own for them. He brought some genuine fun and laughter to their lives.

“I had a blast hanging out with the kids in Miami. They all had such great attitudes, and their enthusiasm was contagious,” said Mahone. “The Salvation Army provides so many kids a safe place to live while their parents get back on their feet. I was honored to be part of this great cause and can’t wait to perform for my fans on its behalf.”

The free Universal CityWalk concert will raise awareness of The Salvation Army’s 123rd annual Red Kettle Campaign, the oldest charitable fundraiser of its kind in the United States. Money raised during the campaign helps the Army serve 30 million of America’s most vulnerablethrough an array of programs including food for the hungry, shelter for the homeless and toys for children.

Similar to years past, fans can host their own Online Red Kettles by visiting OnlineRedKettle.org. But this year, the Army is saying thanks in a big way by launching the Rock the Red Kettle Teamsweepstakes and enlisting the help of the artists to raise funds for a chance to hangout with them in person or via a Google Hangout. By joining the Online Red Kettle Teams of Mahone, Jones or Bean, three lucky fans will win the chance to fly to Los Angeles with a guest to attend the concert and meet the performers. Eight more participants will win the opportunity to virtually connect with Austin Mahonethrough aGoogle Hangout before the show.

“The Salvation Army does so much good for so many, and it’s important to help the next generation continue the organization’s legacy of helping people in need,” said Ned Specktor, the show’s producer. “We do that with the Rock the Red Kettle concert, and this year’s show takes fan interaction to a whole new level. Fans can give back to those in need through the Online Red Kettles and also get the chance to interact with their favorite stars.”

To reach budding philanthropists across the country, a live stream of the concert will be available throughThe Salvation Army’s Tumblr page atSalvationArmyUSA.tumblr.com.In addition to giving online or to the more than 25,000 bell ringers found on street corners and retail entrances across the country, supporters can donate through the Army’s text-to-give program. By texting the word “KETTLE” to 80888, donors can send $10 to the Red Kettle Campaign through December 24.

From its humble beginnings as a Salvation Army captain’s startup program in 1891in San Francisco, the Red Kettle Campaign has grown into one of the most recognizable and important charitable campaigns in the United States. It provides toys for kids, coats for the homeless, food for the hungry and countless social service programs year-round.

To learn more about the event, visit Universal CityWalk at CityWalkHollywood.com 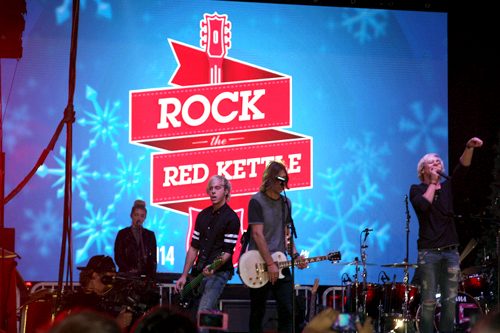 Owl City is coming to your area