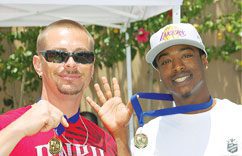 Bret B. and Leo T. show off their first place medals from the Al-Impics. (Photo by Kathy Lovin)

The Salvation Army Bell Shelter in Southern California celebrated this year’s Al-lmpics with an awards ceremony honoring its participants. The Al-lmpics competition is designed for men and women who are in a residential program for alcoholism or substance abuse.

He said, “I found that chronic alcohol and drug addicts didn’t know how to use their leisure time in constructive ways. They would engage in destructive activities. The key was to get people to transfer their addiction to something positive.”

Freeman also noted that tests on those in drug and/or alcohol recovery—before and after beginning an exercise program—showed that athletic activity led to decreased dependence, as well as improvements in physical health, social skills and cognitive abilities. He also said that athletic activity helps calm anxieties, which often drive people to drink or use drugs.

After settling for the silver in the 2008, the women’s volleyball team sought retribution this year. They were able to beat the same team that they lost to last year. Players said that it felt good to be a part of a family and to do something clean, sober, and as a team. Bell shelter resident, Lisa, was named the team’s most valuable player.

“I was in shock,” Lisa said, when asked about the team’s success. She struggled with drug addiction and after a relapse returned to Bell Shelter in October 2009. Lisa believes God gave her the strength to return to the shelter and seek the help she needed. Currently, she resides in the independent living section of the shelter, and is doing well in beauty school.

Bronze medalist, David, was named the most improved player for the men’s volleyball team. “It felt great,” said David about the win. “I was amazed to see so many addicts and alcoholics in one place on a journey together.” David started getting high once he began working in the entertainment industry. His habit began affecting his work so much that his boss paid for him to seek treatment at Bell Shelter. David has been with the program four months.

Oscar—who has been playing chess for 45 years—won first place in the chess competition. “I’ve played and won tournaments before,” stated Oscar. “I saw some old friends and it was a fun outing for me.” Homelessness brought Oscar to Bell Shelter; he has resided there for the past five months.

The Recovery Al-lmpics is an annual event; for the past seven years California’s El Camino College Compton Community Educational Center has hosted it.