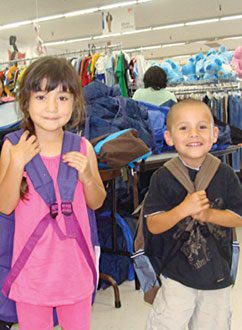 Back to school in Torrance

Six hundred children received a backpack filled with school supplies and a clothing voucher, thanks to The Salvation Army of Torrance, which continued its tradition of helping prepare kids for school with “Operation Backpack.”

One 7-year-old boy, waiting in line outside Army’s Family Store in Torrance, excitedly asked his mother, “When are we going in, mom?” as he peeked through the window to watch the volunteers placing the backpacks on tables.

One mother said that this year had been difficult—she had lost her job, and she and her husband were struggling, unable to afford school supplies for their two children. She hugged David Risher, Torrance social service director, and thanked Major Julio Vasquez, corps officer, for this “blessing.”

A Torrance PTA member present at the distribution expressed how important the backpacks and supplies are for both the parents and the children, noting that the PTA is glad to be part of this great community project.

After the distribution, that 7-year-old boy left the store with a big smile, carrying the pack on his back and holding a bag with a uniform shirt in it; his mother carried a bag with jackets. As they passed by the checkout table, the little boy shouted, “Bye Salvation Army—thank you!” That gave the volunteers and Salvation Army staff a laugh and reaffirmed that assisting these families is part of what The Salvation Army is all about.