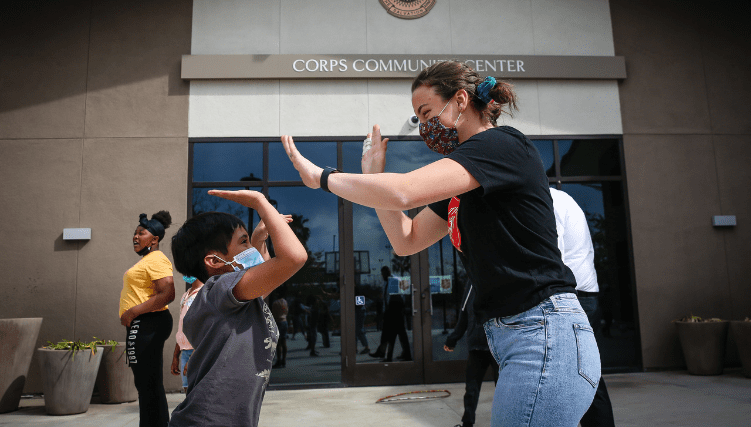 When schools in Long Beach, California, began to reopen for in-person learning, the move was celebrated by many. But the reopening was more of a hybrid situation—continuing online learning with only part of the day in-person.

The need for mid-day pickup didn’t help many working families—a number of whom are hourly workers in the service industry. It’s a major reason why The Salvation Army Long Beach Corps’ distance learning center has continued in spite of the return to in-person learning. Families need a safe place to send their kids to learn so they can go to work.

Community Programs Director Melinda Lankford said one of the students’ moms serves samples at a wholesaler, like Costco or Sam’s Club. She’s also currently homeless, and living in a hotel. When she gave her availability to work around the new school hours, her boss said, “I’ve held your job long enough. You have to come back when I put you on shift.” 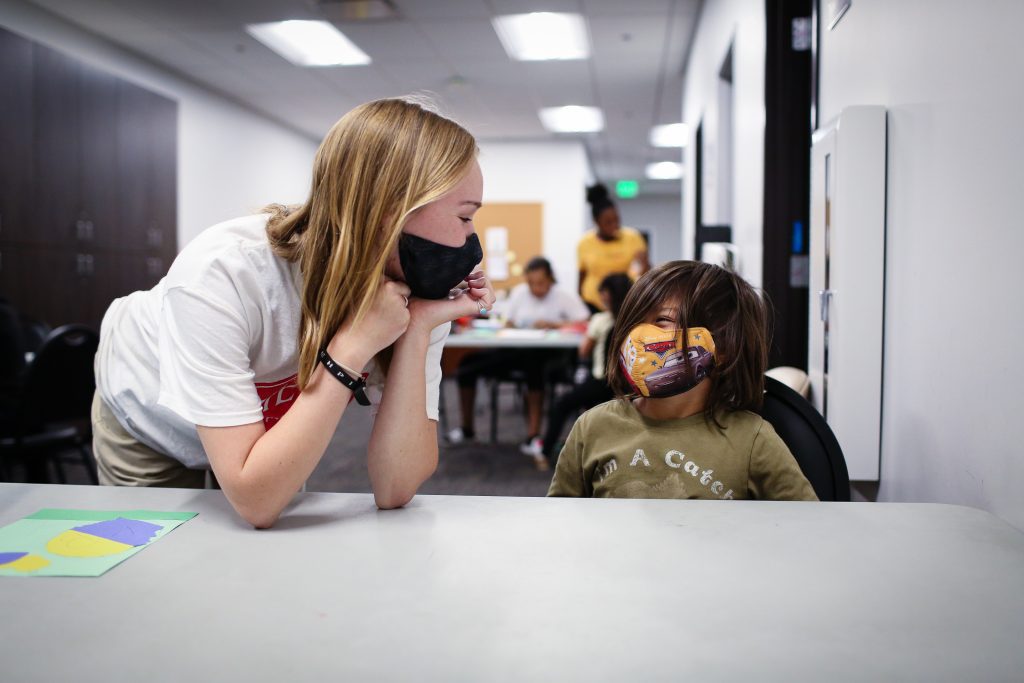 She didn’t know what to do, so she came back to the distance learning center. She couldn’t pick up her daughter until 4:30 p.m., and distance learning ends at three. Distance learning staff members stepped in to take turns waiting with the student every day so her mom can work to keep them in a hotel.

“We’re going the extra mile to make things work for people,” said Lankford. “I have story after story like that…Each family has a story. I would say the word has spread, so we’ve stayed full. Any time I let the counselors at the schools know that we have any open spots, they fill it right away.”

Because of those referrals and the word-of-mouth spread of information, the distance learning center has stayed at capacity at 50 kids since its start in September, and there have been no issues with COVID-19 due to safety measures. Lankford said when kids come to the program, they’re often way behind—they haven’t been able to log in to classes or they’re not understanding the material.

“When they come to us, they’re way behind,” Lankford said. “And they’re frustrated. They’re not used to being in school now, so it’s quite a challenge.”

Additionally, Lankford estimates 15-20 percent of the students are experiencing homelessness, who come to them through other agencies, the corps’ food pantry or the school district. The learning center has served as a critical touchpoint from which The Salvation Army can provide meals, services or connections to other resource providers. 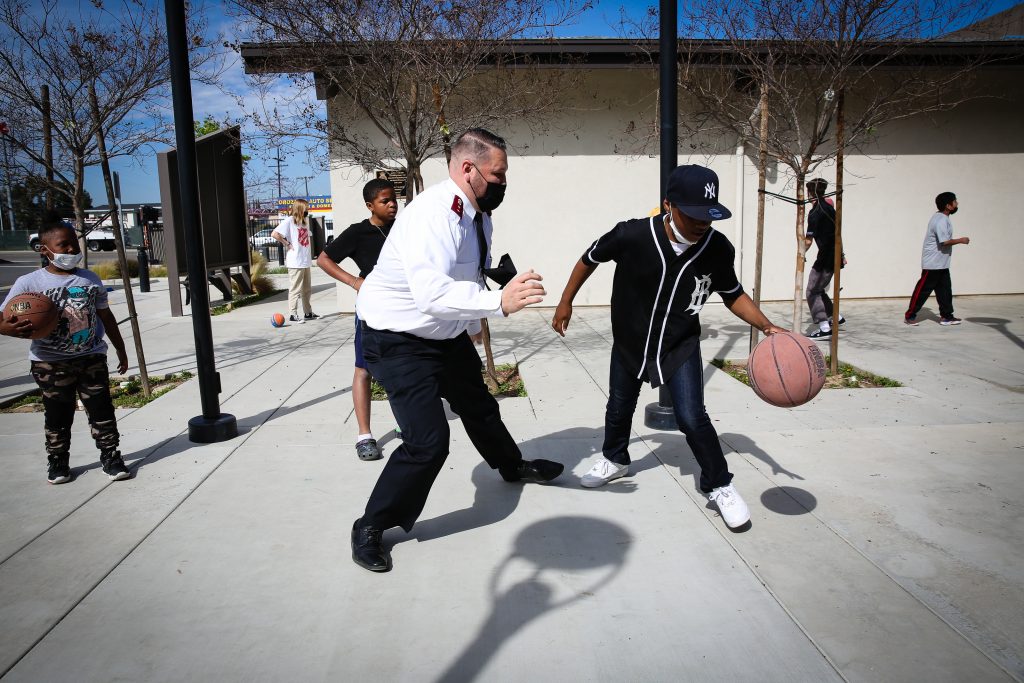 Most of the kids attend Jackie Robinson Academy, where The Salvation Army has a relationship with the school. The school district provides meals, and The Salvation Army picks them up so kids can have breakfast and lunch. They also send food home a couple times a week for dinners.

The budget for distance learning is small, and is completely funded by grants. Lankford initially thought families would fund the program, but most are not able to, since they are 50 percent or less on the poverty scale. She charges $5 a week, so the parents “have some skin in the game.” But she always forgives it if they get behind. Still, some families insist on paying.

“I feel like that is dignity for them,” she said. “We’re all doing this together. We’re all pitching in a little bit.”

Partnerships with Cal State, Long Beach, Long Beach City College and Pacific Gateway pay for interns to supplement a small number of staff members that include leaders Amy Watson and Andrew Tierney, students from Santiago Canyon College who began the job thinking it would last for several weeks and have stayed on to make a difference.

“I just have a huge heart for these kids…Some days are a lot harder than others,” Watson said, recalling one student with a significant learning disability. “My first week here, I sat down with him and just kind of went over his ABCs, and numbers and he couldn’t count to 10. And now he’s up to 20, and he can write his ABCs…that’s happened in a short amount of time. Seeing that progress and seeing the impact that our staff has on these kids’ lives is just what keeps me going.”

Other changes are behavioral. One student’s mom passed away in 2020, and his grandmother became his legal guardian until she passed away several months ago, Watson said. He began lashing out and taking out his emotions on staff and some of the other kids. After leaders created a safe place for him to talk, he’s been more responsive.

“We look forward to seeing him come in every day,” Tierney said. “He’s been kind of like a staple of our program for a while now, because he’s just been there for so long with us and we’ve all built relationships.”

One of the latest additions to the distance learning program is mandatory recess from 10-10:15 a.m. Because none of the kids are on the same schedule, there was never a break, and it wore on everyone—especially the younger ones who would melt down by the end of the day. Some days, Long Beach Corps Officer Captain Dan Whipple makes it out to join in the fun. 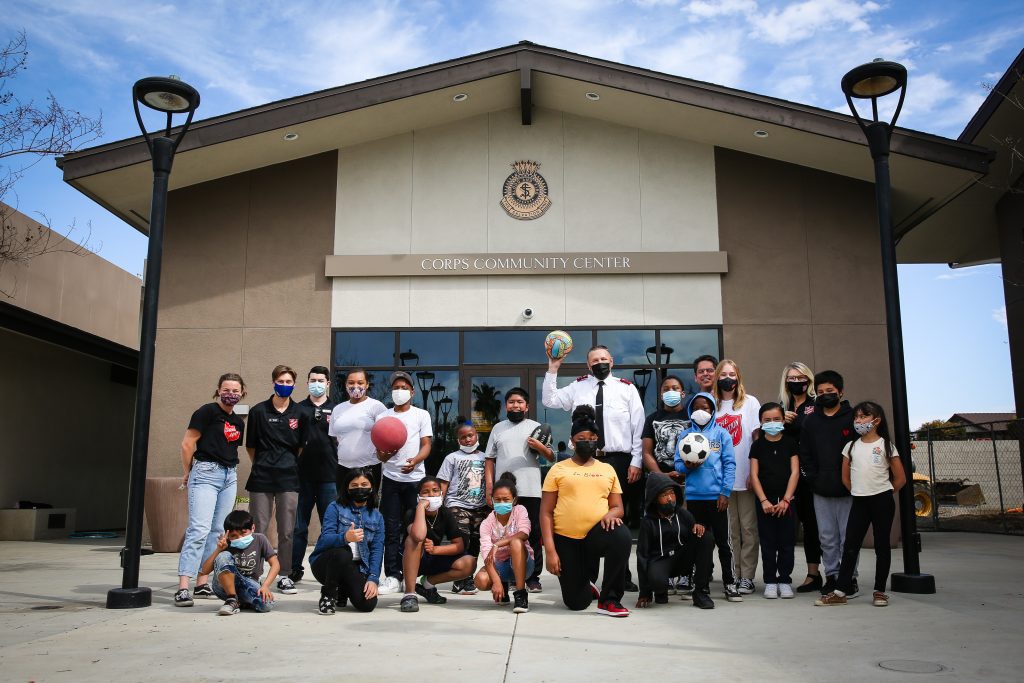 “I get extremely busy in my role, but when I can, I stroll through on recess break and show them some basketball shots and play around, they have a great time,” he said. “We had a lot of fun shooting hoops.”

A couple weeks ago, Whipple told the kids that if he made a shot from very far away, they would get five more minutes of recess. When he made the shot, the court erupted into loud cheers.

As the school year comes to an end, the district has asked the corps to do summer school. Lankford and Whipple are looking into funding and staffing to make it happen in tandem with the opening of the corps’ new Red Shield Center, scheduled to fully open in September. Fortunately, the gymnasium is scheduled to open sooner, so the distance learners can have more space to get their energy out.

“I love The Salvation Army in that it’s not a cookie cutter,” Lankford said. “We will do here what the community needs, and what the parents who are looking to us for help are crying out for, because every time I listen to their needs, you recognize there’s a whole bunch of people in line after them who have the same needs.”