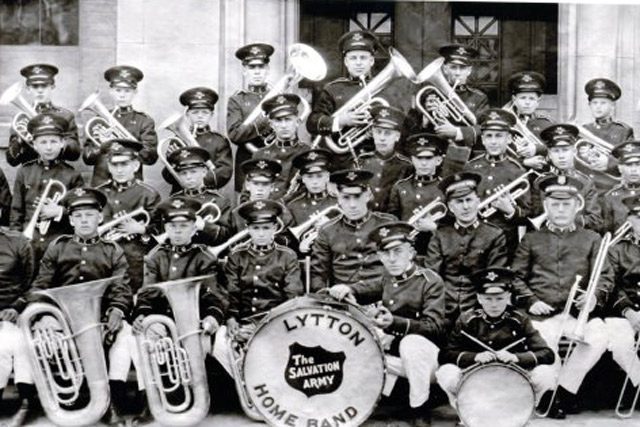 A brief history of the USA Western Territory

Within the USA Western Territory, you will find California, the most populous state in the country, and Wyoming, the least populous. This Salvation Army territory is a patchwork of different cultures, customs, landscapes and peoples. It ranges from the Pacific Ocean to the Great Plains and from the Mexican border to the Arctic Circle. No other territory in the world covers as much of the globe as the Western Territory, but it is not the size that makes the territory what it is—it is the people both past and present. It is the decisions they made, the people they served, the legacies they left and are leaving that makes this territory what it is.

As part of the centenary celebration, it is fitting that we look back at the people who have left a legacy of love for Christ and service to others that continues to be built upon every day. A legacy of vision, grit and innovation that makes one proud to be part of The Salvation Army in the West.

The Western Territory formed as an organizational structure in 1920, but well before it became a territory, The Salvation Army was already having an impact on the West. Starting in 1883, The Salvation Army in the West developed new tactics in spreading the gospel of Jesus to this wild part of the world.

When roads were dirt and mining camps challenging to get to, the Army formed the first group of Charioteers to take a former Wells Fargo stagecoach through the foothills of California preaching, singing and playing brass instruments to minister to the miners.

In an attempt to end poverty in America, the Army established “Farm Colonies.” Ft. Romie (near Salinas, California) and Ft. Amity (near Holly, Colorado) were designed to encourage the urban poor to move onto farms where they could support themselves and their families. 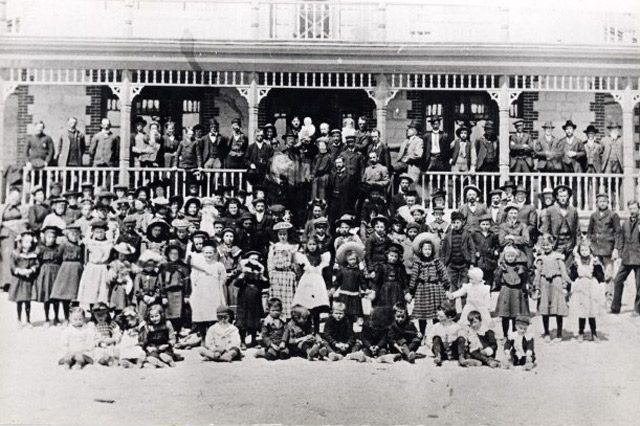 The most iconic innovation that resulted from the early years was the birth of the red kettle in 1891. Captain Joseph McPhee wanted to feed sailors who were in need, so he set up a lobster pot on the wharf to challenge Bay Area residents getting off the Oakland Ferry to “Keep the Pot Boiling,” thus giving birth to the annual Red Kettle Campaign.

Then, as the United States entered WWI, The Salvation Army in the West answered the call from National Commander Evangeline Booth and sent both men and women Salvationists to serve the American Expeditionary Force in the trenches of France.

The end of the war brought a new level of respect for The Salvation Army in the United States, along with a new organizational structure. Growth was not limited to the West, but also occurred throughout the country. The Army was doing more to preach the gospel and meet human needs than it had ever done before. The result of all this growth was a need to reorganize The Salvation Army into territories.

The first decade for the new territory was a mixture of dealing with old struggles as well as tackling new opportunities. In response to the chronic problem of getting to communities not served by rail or waterways, the Charioteers were re-formed and sent north to the lumber camps of the Pacific Northwest. Instead of an old Wells Fargo stagecoach, this time they would travel in a motorized bus that took them through the Oregon coastal forests preaching the good news of the gospel in camps that were just as wild and sinful as the mining camps had been when visited by the original Charioteers.

The decade also brought great opportunities for the territory. An open property on Silver Avenue in San Francisco was purchased, and work began on building a purpose-built training school. The public relations boost the Army had received from serving in WWI also provided significant assets for founding corps and expanding the Army’s social work.

Men’s Industrial Homes dotted the territory in the major urban centers providing early ministry to men struggling with addiction and homelessness. The work of the Army was thriving, and the territory was expanding during its first decade. The end of the 1920s brought an end to the wealth of available resources for The Salvation Army, but presented new opportunities for service to suffering humanity.

For Salvationists, 1929 brought two world-changing events. Early in 1929, Commissioner Adam Gifford made his way to London to participate in the first High Council. The council would change the way the General, international leader of The Salvation Army, was selected. The result of the High Council marked the first time a Booth did not lead the international Salvation Army. Salvationists also remember 1929 for the same reason the rest of the world remembers it: the Great Depression.

The 1930s saw a tightening of the Army’s spending, yet at the same time, an expansion of Army services. At the depths of the depression, unemployment reached 25 percent with the other 75 percent having jobs but still struggling to make ends meet. The Salvation Army was not immune to the financial burdens of the decade. 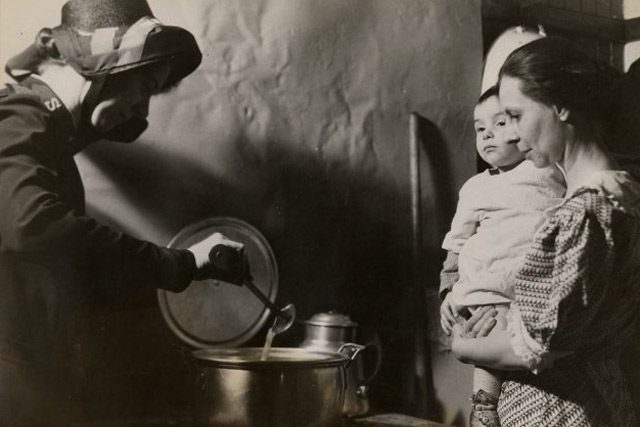 In the ’20s, the Men’s Industrial Homes had planned on converting their fleet of horse-drawn carriages to gasoline trucks. The loss of income caused a delay in transitioning to gasoline vehicles for nearly two decades. Many corps sold quarters (officer housing) and other property to help meet the needs of homeless and migrant workers. Often, corps officers would not be able to draw a salary, and would eat at the same Salvation Army soup kitchens they commanded. Many corps saw the corps officers move into makeshift apartments in the building to help reduce costs.

One of the hallmarks of Salvation Army social services had been that it did not give out charity, meaning that if someone received assistance, they were expected to do something in exchange for the help. People seeking assistance were often asked to mop or to chop firewood. Society generally viewed charity as something that robbed people of their dignity, so the Army avoided it. The Salvation Army assisted for the first time without requiring something in return for services and was forced to resort to charity to meet the need.

Immediately following the Great Depression, the world was pulled into another World War, and America’s entry was sealed after the surprise attack on Pearl Harbor in Hawaii. The Army once again answered the call to serve America’s fighting forces by giving aid and comfort in the same spirit as it had in WWI.

As The Salvation Army geared up for war, the territory was deeply impacted by executive order 9066, which empowered the U.S. military to remove anyone they deemed a risk from coastal areas. Specifically, for The Salvation Army, this meant that most of the members and officers of the Japanese Division were forced into government internment camps. Also affected by this order were Japanese orphans who lived under the care of The Salvation Army in the orphanage on Laguna Street in San Francisco.

Early attempts were made to move the children inland to the Lytton orphanage, but the U.S. Army forced the internment of the orphans who were eventually sent to the Manzanar internment camp. The Salvation Army was able to secure a small concession with the ability to send the officers caring for the children with them to the camp, consisting of both Caucasian and Japanese officers. After WWII, the Japanese Division was never reconstituted with many of the Salvationists who returned from the camps preferring to worship in primarily English-speaking corps.

The orphanage property on Laguna Street did not remain vacant, but instead was repurposed to become the new training school for the Western Territory. After the loss during the depression of the school on Silver Avenue, the training school had been moved back into the same building as Territorial Headquarters. The building on Laguna Street allowed the school to expand to the point where training would go from a nine-month program to the twenty-two-month program used today as well as for the first time enabling married couples to attend training.

Over time, the neighborhood surrounding the school became more dangerous. The increased danger of the area along with the growth of Los Angeles following WWII made it clear to the Army that a move southward was needed. In 1975, the School for Officer Training moved to Rancho Palos Verdes where it remains today. 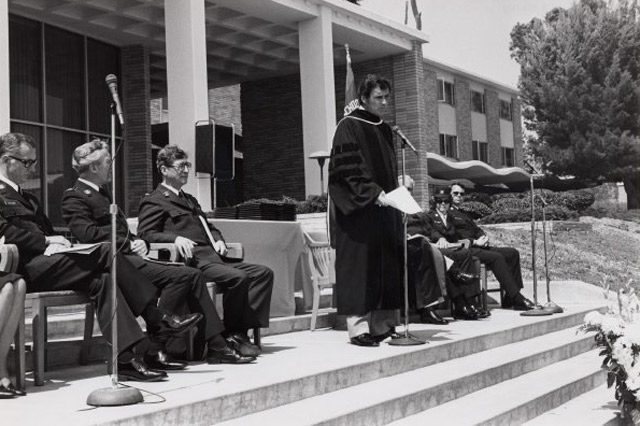 As the 80s gave way to the 90s, the Army moved into the Federated States of Micronesia. Following a devastating typhoon in 1992, the Army began by providing disaster services in Guam, which blossomed into a permanent presence. The Army not only expanded in the Pacific during this time but also opened new corps throughout the West in communities it had never ministered in before as part of the Forward 2000 project. The project was the central initiative by then Commissioner Paul Rader who served as Territorial Commander before being elected the only American to serve as General of The Salvation Army. He led the organization from 1994 to 1999.

The new century has brought with it unique challenges but also new opportunities for the Western Territory to continue to spread the gospel and share the Army’s form of compassion while holding true to many of the traditions that have defined it. The shape of our territory has changed with the recent merging of the Southern California and Sierra Del Mar divisions into the new California South Division. The work of the Army has opened on Saipan, thus expanding the territory even further into the Pacific Ocean. Through the generosity of Joan Kroc, the San Diego Kroc center pioneered the Kroc ministry not only for the West but also for the entire nation.

The thread of innovation and pioneering runs deep in the Western Territory, where Salvationists are bound together with the love of Jesus and the desire to serve suffering humanity.