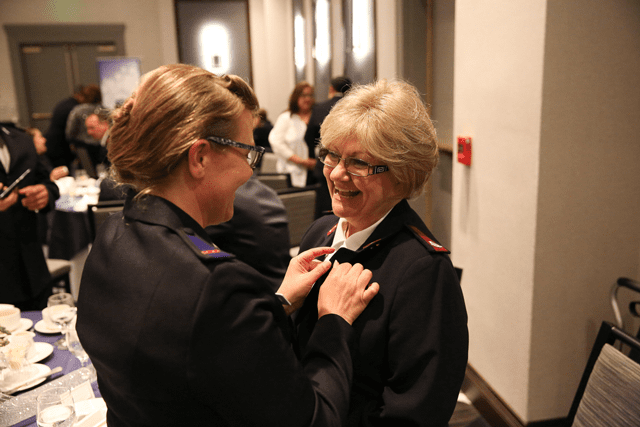 The 2019 Silver Star Banquet honoring the parents and mentors of the Messengers of Compassion Session of cadets took place June 7 at the Sheraton Hotel in Cerritos, California.

After Major Stacy Cross, Director of Campus Services at the College for Officer Training at Crestmont, welcomed guests and Colonel Colleen Riley, Territorial Secretary for Women’s Ministries gave the invocation, dinner was served.

Commissioner Barbara Hood led everyone in a song particularly suited to the occasion, “Great is Thy Faithfulness.” It is this investment from parents and mentors that showed their loved ones that they are worthy, that showed them what God sees in them, Tollerud said.

“The Messengers of Compassion are now called to go out and do exactly what you have done for us,” he said. “It is now our turn to go out and speak into people’s lives with words and actions as you did ours. We must show others that they also are pearls of great price in God’s eyes and ours.” Commissioner Jolene K. Hodder, Territorial President of Women’s Ministries, spoke on “What kind of star?” after a vocal selection, “Today is the Day,” by the Cadet Chorus.

We look to the stars—those in the sky and the human “stars” around us—as guides and role models, Hodder said. Many individuals do what they can to get others to view them as stars. Sometimes, though, our human light flickers and dims.

Hodder referred to Revelation 22:16, when Jesus affirms, “I am the bright morning star.”

“It is the bright morning star that we should seek and follow,” she said. “His light is never hidden…I used to shine so people would see me. Now I shine because I want people to see God.” The cadets shine, too.

“The cadets here today used to shine for themselves, too…but now have met the bright morning star,” she said. Now Christ will shine through them into the dark world where they are being sent.”

She concluded her message with an invitation to anyone longing for the light of that star to speak to one of the cadets.

The Messengers of Compassion Session of cadets did the traditional “pinning” of their parents and mentors, gave them their official certificates, and presented and read letters they had individually prepared for them. For those cadets whose parents or mentors are deceased, Stacy Cross, supported by divisional leaders, presented a white rose of remembrance.

The banquet concluded with a prayer of dedication from Territorial Commander Commissioner Kenneth G. Hodder; a song, “How Great Thou Art,” led by Chief Secretary Colonel Douglas Riley; and a benediction from Training Principal Major Brian Saunders.

The Fellowship of the Silver Star, inaugurated in the U.S. in 1930 and extended worldwide in 1936, expresses gratitude to parents or other significant life mentors of Salvation Army officers. Silver Star members receive certificates and a Silver Star brooch.