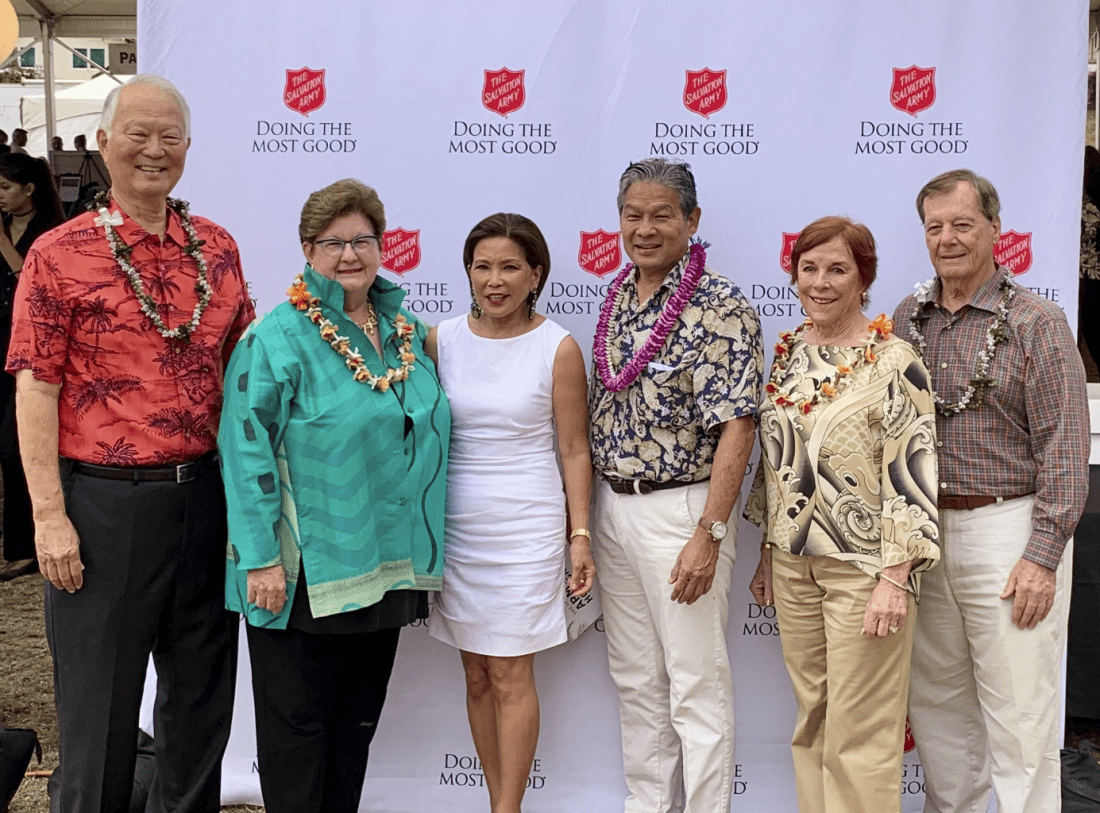 The Salvation Army Hawaiian and Pacific Islands Division raised more than $357,000 at the 2019 Army of Hope Gala to support its Pathway of Hope initiative for Hawaii’s homeless. The event took place April 27 at The Salvation Army Family Treatment Services facility in Honolulu and honored Salvation Army partners who have made a positive impact in Hawaii’s island communities. Honorees for 2019 included the Kahauiki Village Development Team and Central Union Church.

“We were pleased to honor these leadership teams who have embraced the spirit of the award by partnering with us and giving back to our island communities in significant and impactful ways,” said Divisional Commander Major Jeff Martin. “We’re also grateful to our event sponsors and local chefs and restaurants in helping us make this an unforgettable event for our guests, all while raising funds to help Hawaii’s homeless.”

Funds raised during the event will support The Salvation Army Pathway of Hope initiative, which provides a foundation of housing and jobs, along with a new community to break the cycle of intergenerational poverty, homelessness and drug addiction. Additional funds raised during a portion of the live auction will help send keiki (children) to summer camp at The Salvation Army’s Camp Homelani on the North Shore of Oahu.

Kahauiki Village is the brainchild of local businessman, Duane Kurisu. He wanted to build something more than just shelter; he wanted to build a community much like he experienced growing up in a plantation camp on the Hamakua coast on Hawaii Island. A community, he reasoned, would provide families much more than just a roof over their heads. It would provide then with a sense of belonging to a larger family and encourage them to help each other out of difficulties.

In particular, The Salvation Army award honors The Kahauiki Village Development Team’s work in implementing long-term strategies for breaking cycles of poverty and initiating community partnerships that work towards creating solutions for homelessness that sparked a new movement in addressing the homeless crisis. Their work fulfilled an urgent need for affordable housing for local families and created life-changing opportunities for those in the community, including clients graduating from The Salvation Army’s drug and alcohol rehabilitation programs.

“Central Union Church is instrumental to The Salvation Army coming to Hawaii,” said Major Jeff  Martin. “They not only invited us here, but also paid the way to get us here.”

It is those early connections and relationships that have made possible everything The Salvation Army now does in Hawaii, from the drug and alcohol addiction programs to basic needs assistance to youth outreach and ministry services.

To help support Pathway of Hope, Family Services Office, and other Salvation Army programs in the islands, contact The Salvation Army – Hawaiian and Pacific Islands Division at 808-988-2136 or visit hawaii.salvationarmy.org.