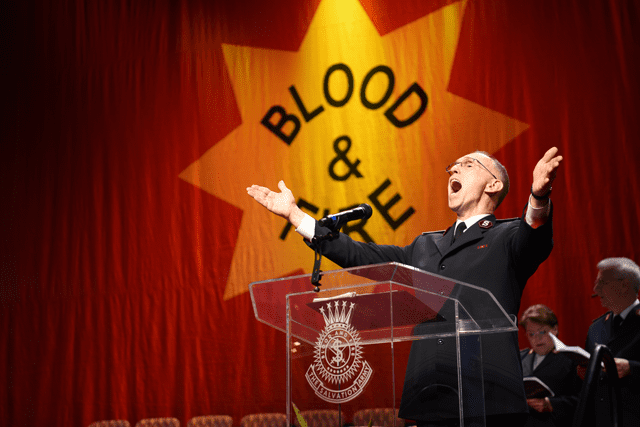 Standing before family and friends at the Cerritos (California) Center for the Performing Arts, the 19 members of the Western Territory’s Messengers of Compassion Session became lieutenants in The Salvation Army June 9 during the Commissioning and Ordination Service, led by territorial leaders Commissioners Kenneth G. and Jolene K. Hodder.

“This is a sacred occasion and we are on holy ground,” said Territorial Commander Commissioner Kenneth G. Hodder in welcoming attendees before leading the congregational song, “And Can It Be?”

“Messengers of Compassion is truly an appropriate name for a session of Salvation Army officers,” Saunders said. “Today, these cadets embrace their session name as their calling. Now, it is their desire to share that message of love and forgiveness and compassion to all. To share the love of God in word and in deed, in action and in attitude. We gather here to proclaim that message and send forth these messengers as they publicly acknowledge their calling from God and accept the responsibilities to be placed on them as Salvation Army officers.” The cadets marched into the auditorium, holding a Bible in white gloved hands and saluting The Salvation Army flag before taking their place on stage. The session sang “All There is of Me” and then collectively offered an affirmation of faith, reciting together the doctrines of The Salvation Army.

Personnel Secretary Lt. Colonel Steve Smith led the congregation in singing a song of consecration, “I Have Not Much to Give Thee, Lord.”

As each cadet was called forward, Territorial President of Women’s Ministries Commissioner Jolene K. Hodder read the individual or couple’s chosen Scripture verse before Hodder performed the commissioning and ordination. He recognized God’s call on each and expressed gratitude for God’s empowering and gifting on the cadet’s life.

“I now ordain you as a minister of the gospel of our Lord and Savior Jesus Christ and I commission you as an officer of The Salvation Army with the rank of lieutenant,” Hodder said to each.

Jolene K. Hodder offered a prayer of protection over the session before Lt. Brian Qualls—now in red epaulets—shared his testimony, a story of bullying and addiction to bury the pain.

“As I reflect on my story, I have come to a glaring truth: I am not the main character of my life. That role belongs to Jesus Christ…If I tell my story, I must tell you about the real hero,” Qualls said. “It’s not about the little kid who moved from home to home, but Christ who provided a home in the form of The Salvation Army. Or the adolescent who angrily questioned his existence, but Christ who whispered God’s love repeatedly. Or the young adult chained by addiction, but Christ who severed the power of sin. “Christ, like many of my favorite main characters, made this world real to me. He showed me that there is much joy, love, hope, peace, faith and blessings waiting for me,” Qualls said. “My prayer is that when people tell the life of Brian, they would share the love of Christ. Because this story is all about Jesus.”

The Surround the City worship team led the congregation in singing “Cornerstone” before Lt. Mony Oregel read from Scripture, Revelation 21:1-7.

The Territorial Staff Band, led by Bandmaster Neil Smith, offered “A Gift For His Altar” by Leslie Condon ahead of the message from Chief Secretary Colonel Douglas Riley.

“I think we struggle with the idea of heaven on earth because of how we see God,” Riley said. “We have a deep desire for more—more money, more time off, more fun, more friends, more things, we want to do more, experience more, understand more. We want to do it all today.

He recounted The Salvation Army’s call to lift people to Jesus and its branding of “Doing The Most Good.”

To do so, Riley said, we must surrender our will to his.

“When was the last time you said to the Lord, ‘It’s all about you, your will in my life’?” he asked. “If we want more of the kingdom of God, it comes to surrendering our will…A true love of God is loving God more than ourselves. That’s what he wants for us.”

We must then let go of our “old life,” Riley said, by the things that consume us in our culture.

“By letting go of it you will find life, you will find freedom,” he said. “I believe many of us in this room are still trying to have both…What’s in your life that’s keeping you from being free?”

Riley led an altar call for those who responded to God’s call to let go and find freedom in him. As prayers continued all around the room, Kenneth G. Hodder asked anyone who felt called to be a Salvation Army officer to stand with him on stage.

Finally, Hodder led the congregation in singing “All Hail The Power of Jesus’ Name” before Jolene K. Hodder offered the benediction.