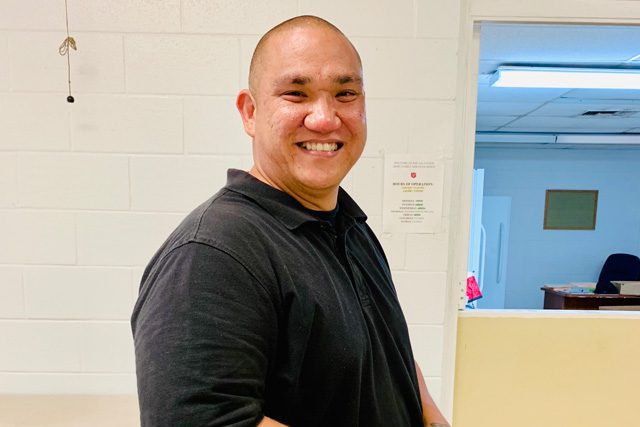 Once homeless in Chinatown, Balmoja now preaches all over Oahu.

Tyson Balmoja has a gift for sharing the Word and mentoring others. He ministers with The Salvation Army on the island of Oahu in a number of ways—at the Honolulu Adult Rehabilitation Center (ARC), Hope House and the Upper Room church. His day job is also with The Salvation Army; he’s a caseworker 40 hours a week at the Family Services Office (FSO), which operates from the basement of the Kauluwela Corps in downtown Honolulu.

Balmoja is serving the Lord with a contagious joy seven days a week, both day and night.

Originally from Haleiwa, Oahu, Tyson took his first puff of marijuana at age 12. Eventually crystal meth became his drug of choice. His family had a history of drug abuse and he fell into that lifestyle.

In 2010 he was homeless on the streets of Chinatown.

“I had everything, and I lost it all,” he said. “The downhill slide from not having a job to being homeless happened quickly.”

He spent about a year on the streets.

“I grew very complacent…very accustomed to the darkness, not knowing where my next meal would come from, not even looking for a job,” he said.

He heard about The Salvation Army ARC and a weekly outreach they did.

“My soul actually cried out to God—God this can’t be it,” he said.

He entered the ARC and through daily devotions he began to really know Jesus.

Baloja gave his life to Christ.

“I’ve been made brand new ever since,” he said.

After 16 years of drug addiction, he completed the ARC program in July 2010 and started working in the ARC warehouse. A few years later, after becoming a soldier at the Kauluwela Corps, he told Rob Noland he wanted to be discipled. Noland, Director of Revolution Hawaii (RevHi), suggested he join RevHi, which he did in 2014.

After RevHi, the ARC asked him to be their chaplain, and he’s done that ever since. He also became the worship leader at the Upper Room, a contemporary evening service at the Kauluwela Corps.

“RevHi set me up for where I am today,” he said.

While he’s been leading worship for about six years, in the last few years his preaching and teaching have taken off. He started ministering at the ARC and word spread from there.

“In the last year, I’ve preached the gospel more than in the last five years,” Balmoja said. He gets help, particularly from the men who live at Hope House. He helps train the men there to be disciples, and after about a year they are ready to go out and preach the gospel, and start sponsoring and mentoring the ARC beneficiaries.

“They’ve been a huge help to me in ministry,” Balmoja said.

He is grateful for his work at the FSO, since he does not have a background in social services.

“We get to live out Matthew 25, and we don’t even have to preach the gospel,” he said. I get to do outreach, and go out on the streets…I love what I do. I would do this for the rest of my life.”

At first, he denied the call to preach and teach.

“God you know me,” he would say. “I’m an ARC guy. You know everything about me.”

God, however, continued to create opportunities for him. A few years ago, Balmoja surrendered to him.

God gave him the desire to preach.

“I’d read the Bible and think: The people have to know this,” he said. If they knew what God felt and that this is his intention, perhaps they’d come back.”

His busy schedule doesn’t allow much preparation time for his speaking engagements, but he manages well.

“I’m in the Word first thing in the morning and at night,” he said. During the week he gets ideas from Bible studies.

“God will lay a message in my heart for a church and for a people and I won’t hold back; I just rely on him,” he said.

Most of time when he preaches, he doesn’t have notes. He said he already knows what he’s going to say.

“Pray up, rely on the Holy Spirit—he goes before us; he comes in after us. I stand on these promises,” he said.

Each week Balmoja receives requests to speak at different churches around Oahu, and recently he’s been asked to pastor two churches. While he’s happy to bring the message when he can, he won’t leave The Salvation Army.

“I love The Salvation Army,” he said. “I’ll never leave.”