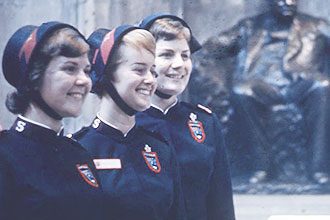 Salvationist Sheryl Callahan attended the 1965 Centennial Celebration as a delegate of the Eastern Australia Timbrelists and will attend Boundless – The Whole World Redeeming again as a delegate this July with the Pasadena Tabernacle Songsters.

At 18, Callahan said the international event was a unique experience. The Eastern Australia Timbrelist group was the first of its kind, and toured cities around the world for four months. The 25 timbrelists conducted two-hour concerts and open air events. They had traveled for over a month by the time they arrived in London—alongside 1,800 Salvationists from around the world who gathered to observe the 100th anniversary of the founding of The Salvation Army.

Callahan said she remembers the excitement of “seeing the international flavor of The Salvation Army” there and feeling “very proud” to be a part of it all. As a teenager, she said she felt the experience was particularly significant in solidifying her place in the church. “I never really felt like I should be anywhere else,” she said.

Now a soldier of the Pasadena Tabernacle Corps, Callahan has served as a timbrelist, songster, corps secretary and Sunday school teacher since joining the corps in 1977.

At this year’s international celebration of The Salvation Army’s 150th anniversary, Callahan wants to see “the Lord’s hand on the work of the Army worldwide. I’m hoping to see it as exciting as I saw it 50 years ago,” she said. “Because the world has changed so much, it will be an uplifting experience, I think, to see how the Lord has used the Army over the last 50 years.”

For new delegates, she encouraged: “If you’re open, there’s no way the Lord won’t speak to you.”