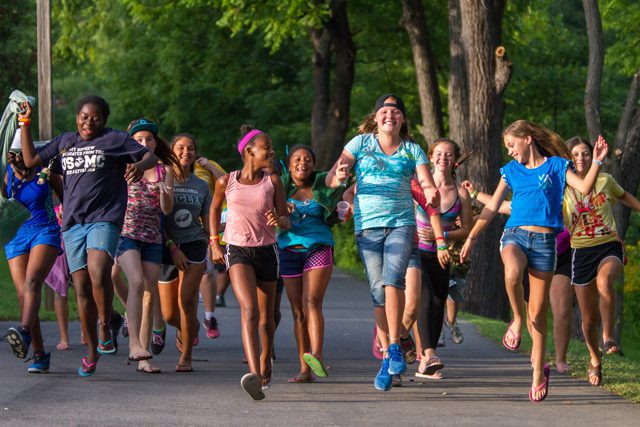 The camps, Pine Summit Camp in Big Bear Lake and Camp Lawrence Daley at Mt. Crags, Camp Gilmore and Camp Wilderness in Calabasas, are located about two and a half hours apart and each serve distinct populations of the California South Division, which encompasses 51 corps with more than 5,400 soldiers.

While some divisions in the West might contain two camps, like in the Northwest Division where there is a camp run by the division and another by a corps, this summer marked the first time a division’s DYSes were responsible for two camps, and they did it through the concept of “one camp.”

“Since we opened Gilmore all those years ago, we’ve been running two camps already,” said Captain Mike O’Brien, California South Divisional Youth Secretary, about the former Southern California Division’s summer offerings. “If there was any ideal location to add another camp to [it would be California South] because there’s already been a culture of a multi camp system.”

O’Brien, along with his wife, Divisional Youth Secretary Captain Jillian O’Brien, and Divisional Camp Director Marty Brown teamed up, and began planning for the summer starting in October 2018.

“The culture that we’ve been trying to build, all three of us, has been a culture of one camp,” Mike O’Brien said. “Even though we’ve got multiple programs that run, the idea is that we’re all doing it together, and that we all are supporting one another, no matter if you’re at Camp Daley, if you’re at Camp Gilmore, if you’re at Pine Summit or Wilderness or Outdoor Adventure Camp, we’re all one team.”

The concept of working as a single team translated literally to staff orientation, with summer staff from each of the camp locations training together under the same roof. The exercise ensured all camp staff was on the same page with expectations and best practices—something that proved to be helpful as the summer progressed.

“We were actually able to borrow staff from camps where the numbers of campers were different, and share them from Gilmore to Pine Summit Camp, even taking them with us for that two and a half hour distance just so that we could support one another and make camp work the best,” O’Brien said.

Both camps also used the same Orange curriculum, Power Up to the Summer, which focused on how God’s power has given us everything we need to live a godly life.

“No matter where your camper was going, they were getting the same kind of lesson,” Jillian O’Brien said. “Whichever camp a camper was going to, they were learning about a specific fruit of the Spirit that week. Some campers have been every week to one of our camps, so they’ve heard about six different fruits of the Spirit…that’s also been a really good thing.”

Some other pieces of programming, like Jesus Theater, a Thursday night experience from Crags and Gilmore that talks about Jesus and forgiveness, have been adopted at Pine Summit, too.

“It has just been really cool to see the commitments that kids are making up there on Thursday nights,” O’Brien said.

Logistically, running two camps two and a half hours apart was a challenge that required careful planning. The trio split up to make sure there was a leadership presence at each camp.

“The three of us have gone back and forth. But that’s been successful in how we’ve been doing that,” Brown said. “But it’s only successful because of our full-time staff and our full-time youth department that have been able to be located at each of those camps and keep things going even when all three of us might be at one camp or the other.”

Brown typically spends Monday, Tuesdays and Fridays at Crags and Gilmore and Wednesdays and Thursdays at Pine Summit. During the summer, he adjusted his schedule to fill the holes left by the O’Briens, who broke up their time at camp by the week, spending three weeks at one camp and two at the other.

“It is a lot of driving back and forth, but it’s been good,” Jillian O’Brien said. “That’s kind of how we’ve tried to make ourselves known in both places, even though we can’t be in both places.”

The first year of two California South divisional camps brought changes, like only one music camp this year, held at Pine Summit, as well as adjustments to how the former divisions used to fund and transport kids to camp. While he noted change is often difficult at first, Brown said it has been good, too.

“It’s been really positive being able to look at camp in a different way—meaning Pine Summit and Crags, Gilmore and Wilderness have always been there, but now, with the divisions merging…we can think differently sometimes about structure and how to set up camp properly,” Brown said. “That’s been fun to look at…Now having more staff and more camp programs, we have the advantage to look at things differently and solve problems differently as well.”