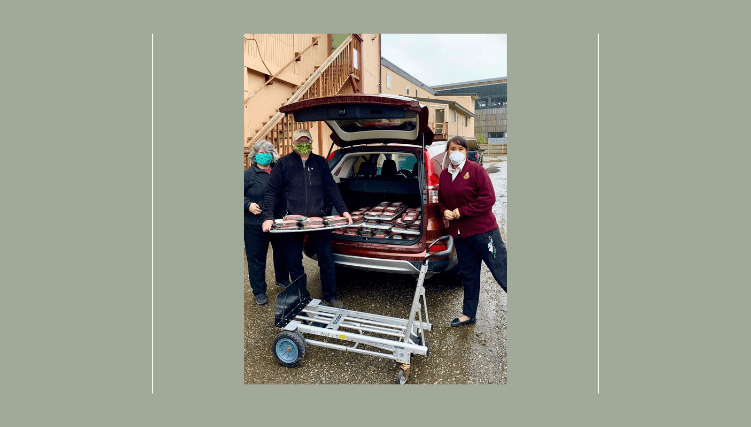 The Salvation Army delivers food boxes with dignity in Juneau

When volunteer driver Sandi Benzel delivers a food box from The Salvation Army to a recipient’s home in Juneau, Alaska, she leaves the food on their doorstep and returns to her vehicle to give them a call. She does this to give the recipients privacy, maintain social distancing and to make sure bears don’t take advantage of the nutritious items. It is Alaska, after all.

That’s often when the door cracks open and she has a small interaction with the person on the other side.

“The drivers, we get all the blessings,” she said. “Because when we drop off the food, grandmas throw me kisses and people are so grateful, and they’re saying ‘thank you, thank you so much.’”

Benzel is one of a group of drivers who deliver between 60-100 boxes each Thursday from The Salvation Army Juneau Corps. The corps started the food box delivery program in 2020 as a way to safely distribute food during the pandemic. Individuals and families are eligible for a new box every other week.

“Some people may find it embarrassing or hard humility-wise to come down and say, ‘Hey, I need a little bit of extra help this month,’ so there’s a little bit of privacy that’s able to happen, because the [requests] come in online privately, and we just deliver to their homes and nobody needs to really know that they needed that little extra help…It’s a little more discreet.”

Drivers have dropped food off at homes, boats and homeless encampments—really anywhere people live. Before the pandemic, people would come to the corps building to receive their food, bus tokens, clothing vouchers and other social services. Then, a busy week would include distributing around 35 food boxes.

Now, more than a year later, the food is in higher demand. A post pinned to the top of the corps’ Facebook page about the food boxes has been shared 175 times at the time of publication, and has garnered interest from people as far as Michigan, Wisconsin and Africa, which are, unfortunately, outside of the corps’ delivery zone, but point to the scope of pandemic poverty and hunger.

Over 38 million Americans lived in households that struggled against hunger, according to a recent report on food security from the USDA. The report showed that even with the expansions to the social safety net during COVID-19, household food insecurity remained at 10.5 percent in 2020—showing the role charitable food assistance played in keeping people fed. Across the U.S., food banks and pantries provided assistance to at least 60 million Americans in 2020, a 50 percent increase from 2019.

In Juneau, the requests for food boxes have ebbed along with the surges in COVID cases and the corresponding restrictions.

“When the surges happen, the numbers go up,” Halverson said. “People are just a little more hesitant to go shopping.”

Halverson added the corps works with a number of agencies who also refer people to the list, including the state that has a list of elders the corps delivers food to.

Sustaining the effort has required volunteers, who organize the food pantry, pack the bags of food and drive them to the various home locations. To do this, Halverson said the corps worked with the City and Borough of Juneau and the American Red Cross, which helped provide drivers and volunteers.

Benzel is a volunteer from the American Red Cross. She got involved with driving after seeing a posting from the area’s leader during the spring of 2021. A former truck driver on the pipeline, the oil transportation system spanning the state, she thought, “I have a car that will go through rain and snow and ice, and I know how to drive on bad weather roads.” She’s been making deliveries every week since.

For some, Juneau’s steep hills and ice can make it challenging to safely get to a bus stop to get necessities like food, Benzel said.

She’s been in the recipients’ shoes. Benzel is half Tlingit and lived in the village as a child. She remembers times when her family didn’t have enough food, but her mother didn’t want to ask for help. Someone turned their family’s name in, and they got a Thanksgiving basket from The Salvation Army. She’s gone on to serve at Thanksgiving dinners as needed, and is always trying to “pay it forward.”

“It’s our Tlingit culture value to share, and sometimes I can’t share everything, but I can share my time,” Benzel said. “I have a car that runs well that I can drive, but basically it’s really seeing and knowing that people are having a benefit.”

One of those people was a single mom who moved to Juneau to get a fresh start. She needed help with rental assistance and food, and Halverson directed her to the online form. Later, Halverson received a thank-you note. The mom had her kids set up in school. The food box helped her get settled, she said, and kept her kids on a normal schedule.

While the food box delivery has met needs for more than a year, Halverson said there is no end in mind for the service.

“As long as the numbers are high, and as long as people still feel uncomfortable with COVID, we’re going to keep delivering it this way,” she said. “This is one of those programs that found a life of its own.”