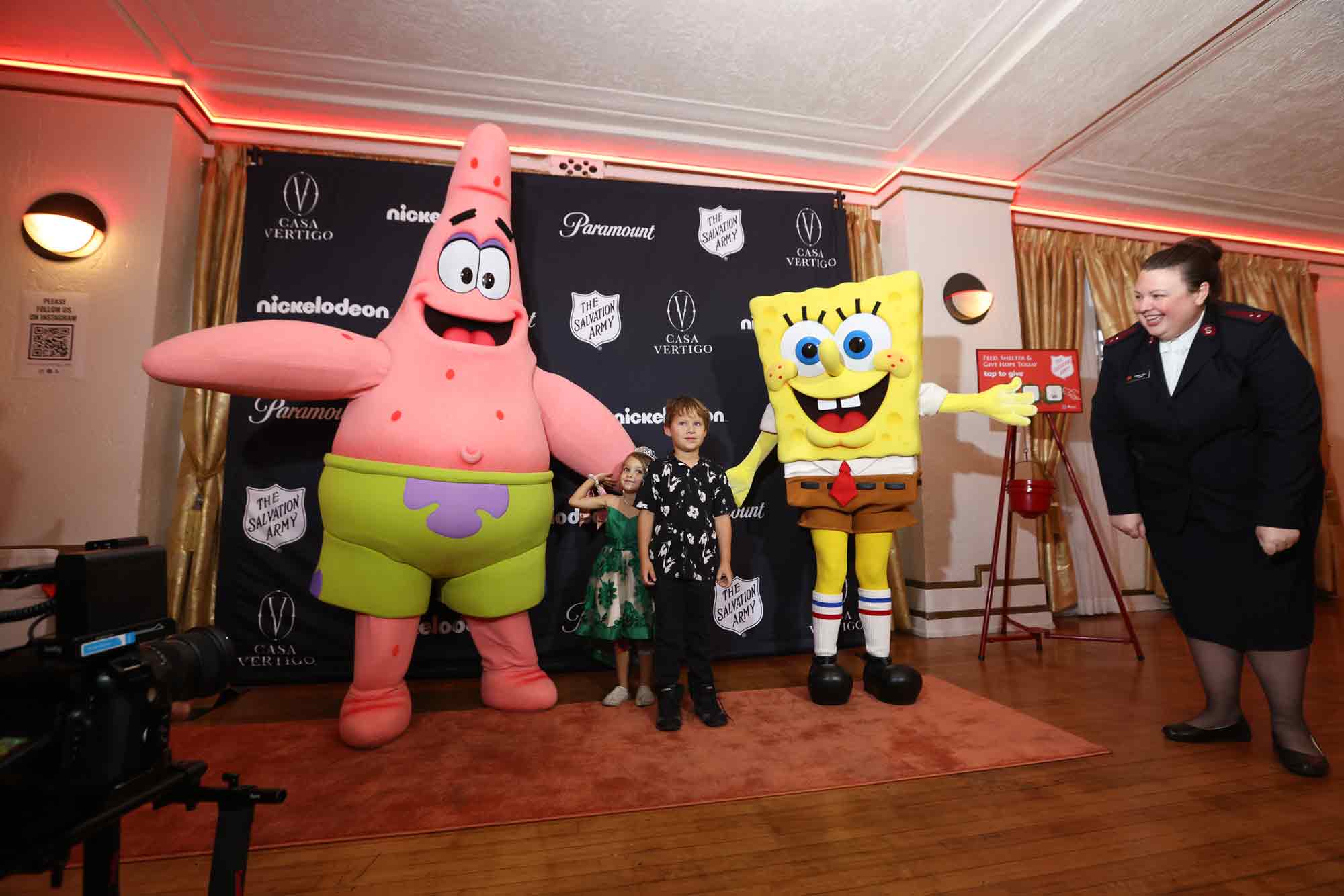 Inside the historic Casa Vertigo building in downtown Los Angeles, the excitement was palpable. Warm plates of turkey with all the fixings had been devoured and all eyes were on the most famous person in the room: SpongeBob SquarePants.

As the iconic costumed figure made its way to the photo booth area, a line amassed of fans young and old. Karen Guevara watched as her sons posed with the figure before hopping in the photo herself.

“It’s exciting,” she said, looking at the developing polaroid image they were handed at the booth.

Along with SpongeBob, other popular life-size Nickelodeon characters, including Patrick Star from “SpongeBob Squarepants” and Blue from “Blue’s Clues” took turns in the booth at the annual Feast of Sharing Thanksgiving meal Nov. 22.

The event, held by The Salvation Army, Nickelodeon, Paramount and Casa Vertigo marked the first time in two years the Thanksgiving meal was held in person after having transitioned to a food box meal distribution during the pandemic.

“This long-standing event is so special to our Nickelodeon staff and talent family, and we are thrilled to be back in person this year serving the community,” said Nickelodeon Director of Public Affairs David Bruson.

The event, held in LA’s Pico Union neighborhood, provides a warm, catered traditional Thanksgiving meal and entertainment to hundreds of families, many of whom participate in The Salvation Army’s programs. Meals were served to hundreds of people across two seatings (4 p.m. and 7 p.m.).

“For nearly a decade, the impact that this partnership with Nickelodeon has had on the downtown area of Los Angeles during Thanksgiving is extraordinarily meaningful,” said Southern California Divisional Commander Lt. Colonel John Chamness. “In that span of time, more than 15,000 people have been served a delicious holiday meal and have been treated to an experience they’ll never forget, and we are so grateful.”

In addition to the photo opportunities attendees had with beloved Nickelodeon characters, themed activities were on hand. A popular activity featured live sketching from Nickelodeon animators, who would provide an outline of iconic animated scenes on canvases for children to color in and take home.

Live entertainment was provided by a Salvation Army brass band along with the children’s mariachi group from The Salvation Army LA Red Shield program. A DJ from Nickelodeon Music emceed the night. During the event, The Salvation Army recognized Casa Vertigo and Special Events Operations Maria Caballero for generously donating the space for the event in addition to Nickelodeon and Paramount, presented to Brunson.

Southern California Division General Secretary Captain Sean Kelsey said the Feast of Sharing is a great way for the many people who want to serve during the holiday season to give back with The Salvation Army. In fact, one of the volunteers he spoke with was an individual who used to benefit from the meal in years past, he said.

“It touches people’s hearts, and we’re happy to be the conduit for those people,” he said.