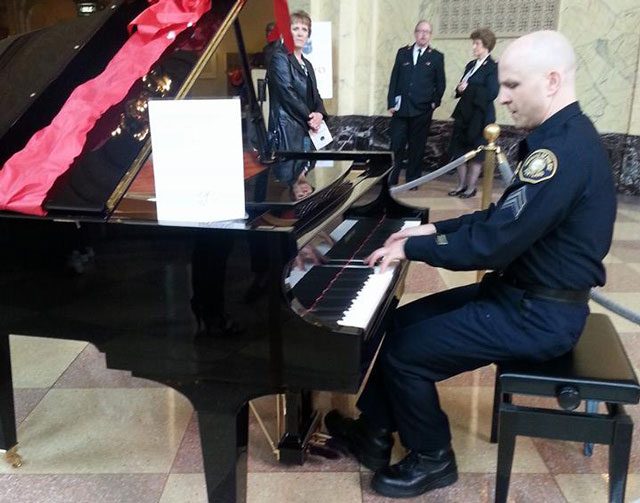 Over 1,000 people showed up to the historic Arlene Schnitzer Concert Hall in Portland, Ore., April 19 for The Salvation Army’s third annual Something Grand concert, which benefits the Army’s after-school music programs in the Greater Portland Metro area.

“This concert opens doors for so many children whose doors to the arts close in front of them,” said Major Don Gilger, Portland metro coordinator for The Salvation Army. “Our job is to open the doors so kids have the opportunity to find passion and succeed. We are thrilled to once again partner with our longtime friend and supporter, Michael Allen Harrison, for this concert event and to provide programs to underprivileged children that give them a chance to explore, learn and grow.”

To date, this event has raised over $28,000 to provide equipment and lessons to children who would not otherwise have access to a program of this quality. Proceeds from this year’s show are expected to be about $15,000.

The event began in the lobby, with youth who benefited from music scholarships playing in the lobby, and ended with a Red Kettle appeal to patrons as they departed.

“Michael Allen Harrison’s artistry and heart for promoting music and “Playing it Forward” has a profound influence on the Oregon music scene,” said Major Ronda Gilger, Cascade divisional women’s secretary, “and his partnership with The Salvation Army has been life changing for the youth he has mentored in their pursuit of musical excellence.”

Harrison is director of the Snowman Foundation. His students, including Hailey Rowden and Kaylee Sullivan from The Salvation Army of Gresham, Ore., perform at concerts and regularly “Play it Back,” teaching others what they were fortunate to receive.

Partners of The Salvation Army for Something Grand included Safeway and the Safeway Foundation, and Atiyeh Bros. Rugs & Carpeting.

Hailey Rowden, former student at The Salvation Army Gresham Music Academy and student of Michael Allen Harrison,  who is now a professional pianist and gives back to her community by helping kids learn piano;