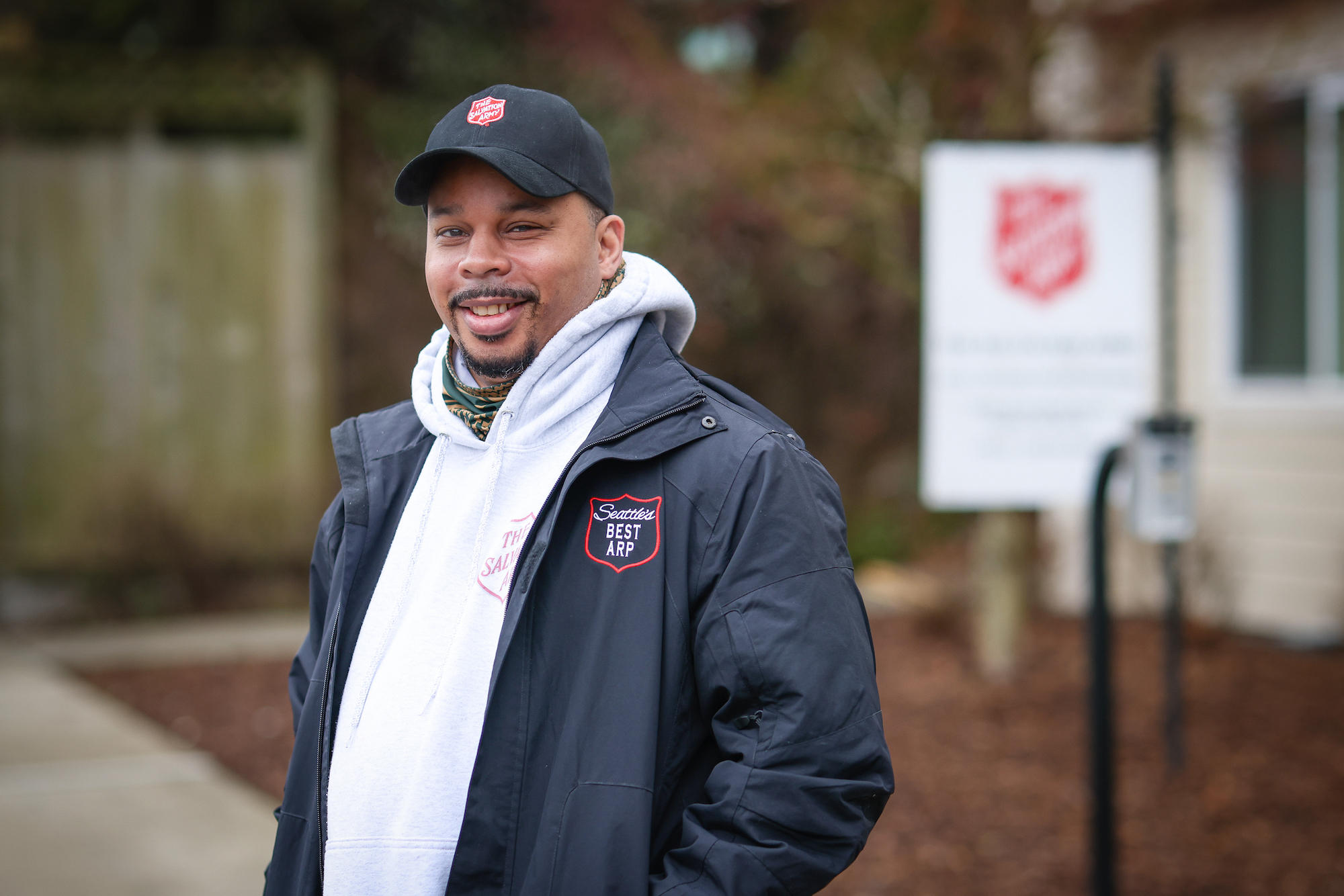 Love Beyond recovery: Erik Oglesby stands on the front line for those in need.

Erik Oglesby found an unlikely kindred spirit at The Salvation Army Seattle Adult Rehabilitation Program (ARP) during his time there in 2020—a squirrel who demonstrated the importance of focus.

“I used to sit in the main hall around devotion time, 7 a.m., and I’d stare out the window,” Oglesby said. “Every morning this squirrel would run down the tree and jump on the fence; he’d jump back and forth, back and forth…like he couldn’t decide where to go to get the nut or where the nut was, or what was going on. And that’s like where I was at that moment. You know, I’d hit the fence. I’m lost.”

Today, Oglesby works for The Salvation Army Seattle Social Services as the Off-Site Shelter Program supervisor, overseeing men who come in off the streets looking for a safe place to sleep. He said he loves his work.

“I want to make sure I’m there to help those who need the help,” he said. “The fact of the matter is everyone who’s on the street wants a place to live and they all want to not be on the street…I’m literally standing on the front line at the gate, letting them in.”

The ARP and Seattle Social Services work together to find placement for clients based on individual needs. An ARP differs from the Army’s Adult Rehabilitation Centers (ARCs) in oversight: an ARP is run by the local Salvation Army while an ARC falls under the Western Territory’s ARC Command. Both provide a six-month residential treatment program.

From the shelter, the men have the opportunity to enter more in-depth programs, including the Army’s William Booth Center or the ARP. “They have to present it to us,” Oglesby said. “We can’t just go and say, ‘Hey, we think it’d be good for you.’ They have to show me they want it.”

Before ending up at the ARP, Oglesby had a successful life on the surface: good jobs, a woman he loved and his family. His father was a church deacon, and although Oglesby learned the right words to say, they didn’t ring true.

“If you’d known me 10 years ago, I’d have laughed at [The Salvation Army] and everything you’re doing. I didn’t care,” Oglesby said. “I spent years doing drugs and alcohol, while maintaining a place and living with my girl. I didn’t need your help, right? Until now.”

When his substance use landed him in the hospital, a nurse suggested detox. From there, the detox center sent him to The Salvation Army.

“I hopped in this cab, and I’m losing my mind because I don’t know what this place is,” he said. “I don’t know where I’m going, other than a thrift store. I had no idea about The Salvation Army, about rehabilitation.”

Scared and cold, he arrived at the ARP with just the clothes he had on. “They brought me in,” he said. “They gave me clothes…I sat on the edge of my bed and I rocked back and forth, back and forth for like weeks. Not knowing what I was going to do. I had no idea about recovery.”

He credits the ARP curriculum, and what it revealed, with his transformation. “I learned to read Scripture, study Scripture…to listen for God’s intent [and] to listen to what others have to say and be open to the fact that other people hurt,” he said. “I learned that I need to take those talents I have and use them for more than just myself or my game.”

“I’ve worked with Erik from day one of his recovery, where he was at his absolute lowest, to where he’s at now,” Jump said. “I’ve witnessed him go from living in fear to living in joy and selflessly giving back to others. Erik turned into a leader…holding our men accountable along with setting a positive example of how a man in recovery should live.”

Oglesby said a lot of people come to the ARP thinking they can “chill” for six months.

“No. Real recovery is done by tearing yourself apart—looking at those demons, or those evils you’ve done, and to try to not just live with it but make amends and show somebody else that they don’t have to go through the same thing,” he said.

After Oglesby spent a couple of weeks obsessing about his car, Jump told him to get over it, saying the impound bill was probably more than the car’s worth. Oglesby recalled the words of the woman he’d been involved with: “There’s nothing that I have that I can’t let go right now, today, and walk away from.”

That was a turning point. “What if this is it?” he said. “What if you’re gone tomorrow? What are you willing to let go of? How are you living your life? Are you doing what you need to be doing?”

He had messed up before, but that didn’t have to be the end. “Somebody cared enough to give me a place to just stop and realize that I matter somewhere. I didn’t believe I did anymore…The Christian aspect of this is huge,” Oglesby said. “I tell every guy here, ‘You’re still on two feet above six feet. So you still have a chance. You’re doing drugs today. But tomorrow can be a whole different thing, if you choose it to be.’”

He knows how hard it can be to forgive yourself, noting it helps to realize everyone has deficiencies. “It’s progress, not perfection,” he said. “Now I just do [what I do] in the Lord’s name. I wake up every day and pray, ‘Just use me like you need to use me.’”

Since he entered the ARP just before the COVID pandemic took hold, Oglesby observed its impact on shelters and the individuals they serve.

“I’ve watched people break down; I’ve helped in areas that I would have never thought we would have helped in…I got a good look at what the ARP means to the community,” he said. “I hope the ARP has funds to last them for another 150 years, and beyond.”

And, Oglesby didn’t forget about the squirrel.

“The funny thing is after being there for about 90 days, all of a sudden there were two squirrels,” he said. “But it seemed that now the first one knew what it was doing, like it had a focus—OK, I’ve got to go this way. Run down and grab this pine nut and take off and go do its own thing. And that’s kind of what it was like being there.”