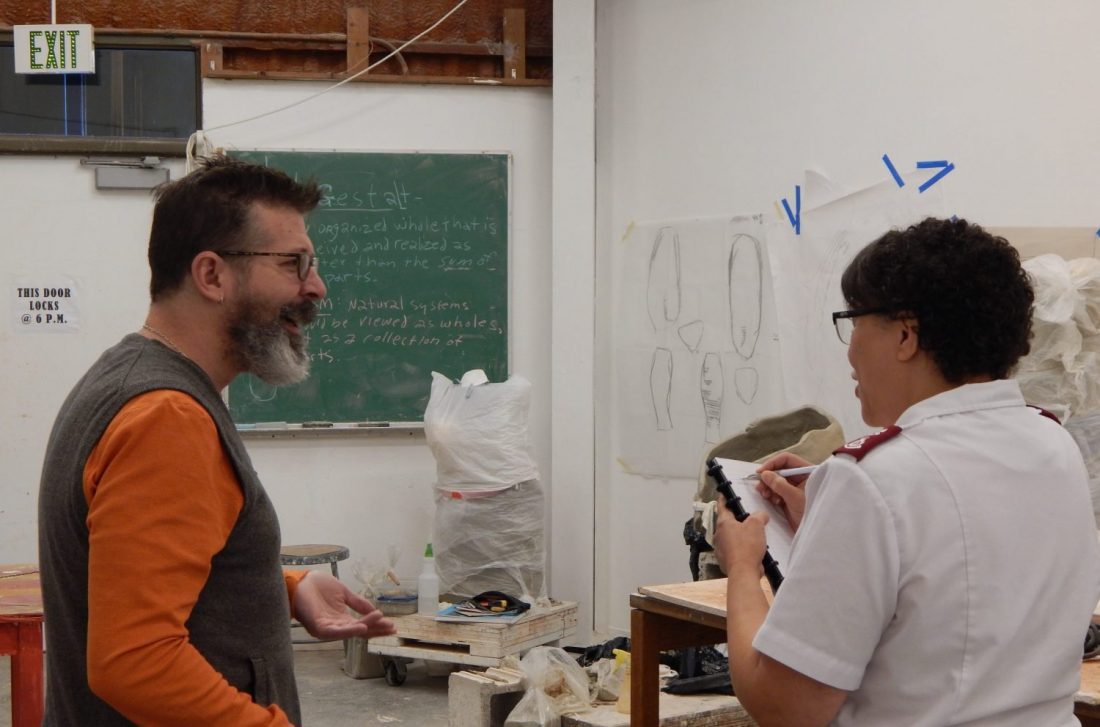 Doug Jeck finds a place to worship and teach at the Seattle Temple Corps.

Doug Jeck was walking down a major street in his North Seattle neighborhood last spring when he came upon a stairway leading down to the entrance of a large building. He decided to sit for a moment. He looked at the front of the building, thinking it would be a nice place for a sculpture. As a professor and chairman of the 3D4M Program in the School of Art at the University of Washington and a widely acclaimed sculptor, Jeck would know.

The sign on the building displayed worship times. Seeking a new worship environment and realizing this was The Salvation Army, Jeck thought it might be a comfortable place for him. When he showed up the following Sunday morning at the Seattle Temple Corps, he was surprised to find that it wasn’t a simple gathering of recovering addicts sharing testimonies over coffee. The worship style appealed to him, and as a former trumpet player he especially took a liking to the Seattle Temple band.

Jeck became a regular worshiper at Seattle Temple and joined one of the weekly Bible studies. But his own personal ministry began when he asked the Seattle Adult Rehabilitation Center (ARC) administrators, Captains Timothy and Judith Rockey, if he could teach a clay sculpting class at the center. He knew that working with clay could be a meaningful mode of expression for the men—a productive way of releasing some of the hurt or anger inside.

“Very often clay registers a persona or impulse that is best purged,” Jeck said. “I know this was the case with my early work.”

Until a few years ago Jeck himself was addicted to alcohol, consuming a liter of vodka a day. “I was killing myself,” he said. “It didn’t matter to me that I was dying.”

He said he was an alcoholic, fulfilling his responsibilities as a professor and continuing to create artwork that had won him a prominent place in the world of sculpture.

“I’d come here and I’d teach,” he said, looking around his studio. “Nobody ever said anything.”

Jeck credits the Lord with convicting him that he needed to sober up.

“The little voice inside of me that I thought was my last bit of sanity was him. God convinced me to go to Schick Shadel [a Seattle rehabilitation center],” he said. “I brought my Bible with me.”

Years before, in graduate school, he had accepted Christ as savior. And while he understood that lasting help comes from Jesus Christ, he knew he had work to do.

“The thing with sobriety is you’re still left with yourself,” he said. “All the gigantic issues you have as a human being that turned you into an alcoholic in the first place are still there.”

He made a new commitment to Christ after detox, yet struggled with other vices until, he said, he completely surrendered himself to God.

“There was only one step for me, and that was acknowledging that Christ healed me,” Jeck said. Now he considers his commitment to sobriety a covenant between himself and Christ.

Further convicted of ego, he now attributes the complexity of his artwork to God guiding his hand. As a reminder to himself, he keeps a quote from Oswald Chambers in his wallet: “Watch how God will wither up your confidence in natural virtues after sanctification and in any power you have until you learn to draw your life from the reservoir of the resurrection life of Jesus.”

He said he prays Philippians 2:3 each morning, an instruction to dispel any vain thought, and reminds himself that his statues are “just stuff.”

Jeck has renewed creativity at the Seattle Temple Corps and the ARC, teaching an art class to children at Vacation Bible School in the summer and offering workshops at the ARC.

In one workshop with men, each received a mold of a skull on which they constructed a face out of clay—a technique he has used in paid artist sessions. At the ARC, Jeck volunteered his time and donated materials.

“This is as good a project as I have for anybody,” he said. “And they did some great work.”

Although Jeck doesn’t like to promote himself as an academic, he does point it out to the ARC beneficiaries. “I want them to know I take it seriously,” he said. “I take them seriously.”

In addition to offering expert instruction, Jeck also prayed with the men and offered his own testimony as he taught.