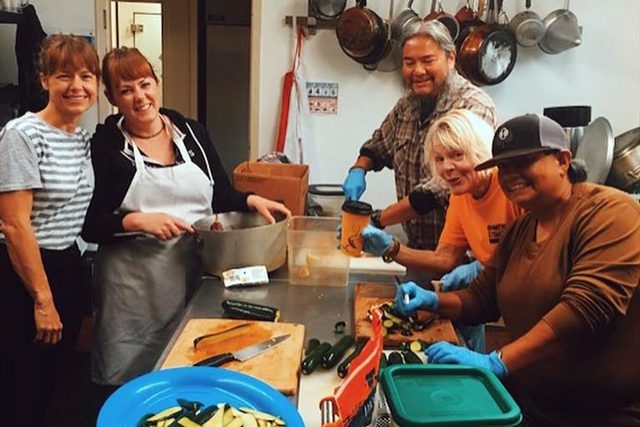 The participants prep and cook lunch for approximately 50 people every Thursday.

The savory aroma of Venezuelan arepas, Indian spices and more fill the air every Thursday at The Salvation Army Santa Cruz Corps. Something new is cooking every week in the corps kitchen as Vrinda Quintero—a professional chef and volunteer of Santa Cruz Downtown Streets Team (DST)—teaches culinary skills to those facing homelessness so they can re-enter the workforce.

“The kitchen is a space that levels all the grounds. Everybody is equal in the kitchen and then everybody is equal eating—which is another thing I appreciate,” Quintero said. “It brings dignity and a warm space for folks to be. They can also get some empowerment.” Launched in February, the eight-week culinary program encompasses everything from basic culinary skills and knife techniques, to cooking, menu design, kitchen clean-up, handling different ingredients, using equipment like griddles and more. Quintero, a native Venezuelan, also goes over more unique lessons such as cooking as a medicine with aloe vera and workers’ rights.

Her students are team members from the DST who are homeless or at-risk of being homeless and volunteer with the organization for city clean-up projects. The organization provides them with non-cash stipends for basic needs, case management and employment services to secure permanent housing and employment.

“It’s been really great,” Quintero said. “They love it and I love it. The people that eat their food love it.” DST originally sought permission from the Santa Cruz Corps to use its dining hall for weekly success meetings with its team members. So, during a DST meeting, Quintero asked Captain Harold Laubach, Salvation Army Santa Cruz Corps Officer and County Coordinator, if she could teach the culinary course in the corps’ commercial kitchen. And he agreed.

“It’s an amazing partnership. It benefits both organizations as well as…the homeless clients,” Laubach said. “I’m familiar with the other Salvation Army units that have culinary programs. I have found they are very effective, and we realize it’s a need. We were trying to find ways we could incorporate those in Santa Cruz County and it just so happened that our kitchen here is a commercial kitchen. It just fit in perfectly.”

The class starts off with participants cooking breakfast together for their morning meeting where they discuss the lesson and menu of the day. Then they move on to prepping and cooking lunch for approximately 50 people for the DST meeting and the Santa Cruz Corps’ Home League gathering.

“I walk through the kitchen just about every Thursday. There’s people working all around the kitchen in different stations. They’re either chopping, slicing or mixing,” Laubach said. “It’s amazing. It’s very well put together.” Quintero and her students prepare dishes from a variety of ethnic backgrounds including Chinese dumpling soup, Spanish vegan paella, Latin American empanadas, Indian potato and pea samosas, and, of course, arepas from her own heritage.

The dishes, which are mainly vegetarian, are made of fresh, healthy ingredients donated by the local Second Harvest Food Bank. They also aim to reduce food waste by using as many of the ingredients as possible.

But the program is much more than just a cooking class. As they cook, Quintero opens up deeper discussions with her students about what trauma looks like, barriers to overcoming homelessness, reaching out for help and building trust.

“It’s a lot of peer-to-peer support,” Quintero said. “I ask them, ‘What do you want from yourself from the kitchen and what do you want for others?’ Some of their answers have been for second chances in the kitchen for [themselves] and others. Other people have said it’s mutual respect or dignity for themselves and others. I hope…whatever it is that they want for themselves, they can also offer it to others.”

Denise Acosta, Salvation Army Santa Cruz Social Services Director, said the program is a great opportunity for those facing the stigma that they’re not ready to re-enter the workforce because they are homeless.

“Some have been homeless for so long that they don’t really have marketable skills,” she said. “For that short amount of time, [the class] relieves them of the burden of having the stigma of being homeless. For that short time, they’re a student and they just get to learn, and then they get to enjoy the food that they make together. It’s just so beautiful.”