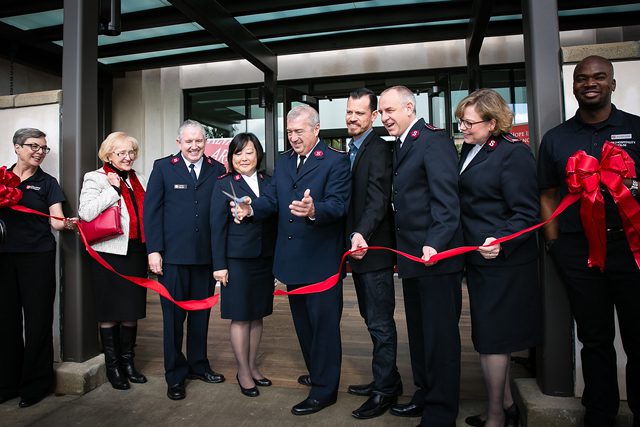 The $6 million renovation took nearly a year to complete. “Rain is used by the Lord to bring his blessing to the desert land,” said Captain Nigel Cross, Orange County Coordinator, at the ceremony.

Nearly a year in the making, the $6 million project culminates in the city’s largest year-round 24-hour shelter. It’s increased its bed count from 50 to 75 and now boasts a computer lab, where residents can look for jobs or update their resumes. The facility also offers classes to teach residents basic computer and work skills.

The new intake area welcomes visitors, who can then sign up for “phase one” of the program, which allows for a 21-day stay. Client receive new clothes and access to a hot shower before being shown to their room. Those interested in taking next steps can enter phase two, located on the opposite side of the house. In this phase, the men must stay for one month but no longer than six months. They must also be seeking steady employment and capitalizing on the resources given to them by their caseworker.

Many of the men on the Hospitality House’s staff were once residents themselves. Having employees who have gone through the program can help break down barriers for the men who walk through the shelter’s doors for the first time, said shelter manager Benjamin Anozie. In some cases, just having someone on staff who can understand and empathize with a new visitor can be a key source of encouragement to help them change their lives.

“A lot of my staff have come through these doors, and actually at one point were guests with us, and have turned their lives around and are now working for us, and we are so big on really giving back,” Anozie said. “We give them positions here and sometimes the people who are coming in recognize and know some of the staff from the streets, and so it’s like ‘you’re here,’ and so this place actually works. They really have the intention of building us up and helping us out.” The aim of the Hospitality House is to give the men who walk through the doors a sense of dignity and respect. One of the ways to do that is to try to take the shelter mentality out of the process, Anozie said. Employees want to help build up the men who stay in the house and empower them by giving them the assistance they need.

“When you treat someone with dignity they rise to the occasion,” said Lt. Colonel Kyle Smith, Divisional Commander for the Southern California Division. “We are dedicated to helping the whole man.”