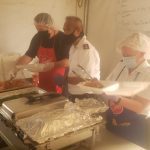 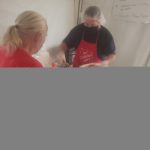 Through the ministries of Lts. Hector and Yasmin Acosta from Antelope Valley and Envoys Jerry and Laura Bloom in Santa Clarita, The Salvation Army has been on the scene, serving at official evacuation centers. In addition, Salvationists and volunteers have provided meals and refreshments to evacuees, police, firefighters and other first responders along the closed highway into the fire zone.

Now 40 percent contained, the fire has to date burned over 38,000 acres, with almost 3,000 firefighters battling it. It has destroyed 18 houses, threatened 1,500 structures, and at one point caused 20,000 residents to evacuate.

Most people are back in their homes, but for those who are not The Salvation Army is on hand to provide lunch and dinner at the remaining evacuation center, and has pledged to remain until the crisis has passed. The Army expects to serve at least 40 meals a day through July 29.

More information may be found here.