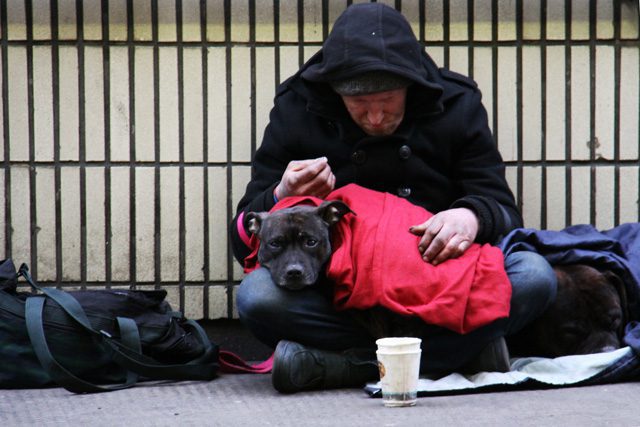 A new effort to provide sanctioned shelter for the homeless in Santa Cruz, California, is designed to make waves—and much needed progress—in a city known for its hospitality to people from diverse backgrounds.

The Salvation Army Santa Cruz Corps was recently selected by the City and Santa Cruz County to provide staffing, meals and referral services at a sanctioned homeless encampment space, scheduled to open April 17. The city will provide the space, tents, showers and bath trailers, and the Army will be on-site to provide case management, nursing care and other services.

“The city and the county have realized they need help,” said Captain Harold Laubach, Jr., Santa Cruz Corps Officer and County Coordinator. “They look for agencies that know what they’re doing and are trustworthy—and we’ve been building this relationship for three years.”

As the unsanctioned tent encampment along Highway 1 has grown in recent months, health and safety concerns have taken center stage. The Santa Cruz Corps has already been operating three winter shelters (two in Santa Cruz and one in Watsonville) to help alleviate the need for shelter during the winter months and provide further assistance to single adults and families. The sanctioned encampment will be an extension of what the shelters are already providing for the estimated 2,000 homeless in the area.

“We’ll have the same services there as we do at the other shelters,” Laubach added. “The city provides the tents and the land, and we provide the security and leadership—along with referrals to drug and alcohol treatment centers, mental health or employment programs.”

Importantly, The Salvation Army also works locally with other agencies, such as the Homeless Persons’ Health Project (HPHP) to bring registered nurses to the shelters as well as to the forthcoming encampment. Nurses can provide vaccinations, tend to open wounds and make referrals to area hospitals if needed.

But it isn’t just Santa Cruz that’s been impacted by the recent explosion of homelessness. Major Darren Norton, Golden State Divisional Commander, said the division and the territory at large have all seen a steep rise—particularly in areas such as San Francisco, Modesto and other parts of Silicon Valley.

“We want to use our resources, experience, and history in major cities to improve and expand our assistance to those in need,” he said. “We want people to become self-sufficient and to find hope for the future.”

To do that, Norton said, the barriers for entry into a Salvation Army program can be higher than others in the area. “We’re interested in transforming the whole person, so that means more structure. We don’t allow drugs or alcohol on the property and that will turn some people away,” he said.

Still, for those who stay, Laubach said, the results can be nothing short of miraculous, backed by The Salvation Army’s mission to “guide each person and their families to a relationship with Christ.”

For those families who need more support, the Santa Cruz Corps has been notified it will receive a $1 million grant from Santa Cruz County to open and operate a homeless navigation center for two years, Laubach added. It’s scheduled to open July 1, a day after the other shelters are slated to close, per the city, and will host up to 50 people.

“Our whole goal for the navigation center is to help out our homeless neighbors and clients but also to get them to Christ,” he said, noting that connecting people with housing options, employment and other referrals are all key components of transitioning out of homelessness for good.

In addition, Laubach hopes many clients will also become valued members of Salvation Army congregations and children’s troops programs. But it all starts with a link to the community through a sustained relationship with the city and the county, he said.

“We can do amazing things,” he said, “but people need to know we’re here, we’re capable and we’re available.”