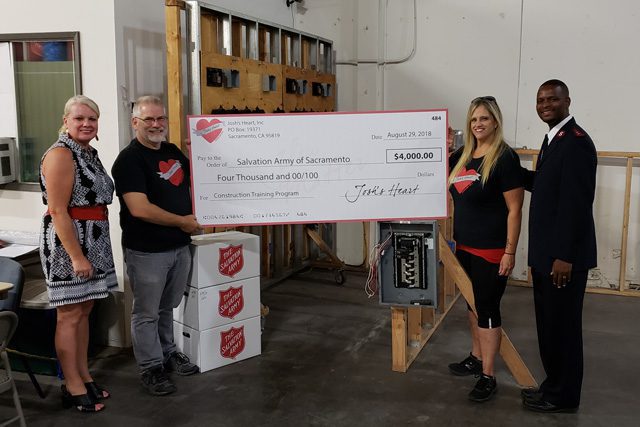 The Salvation Army’s construction training program in Sacramento recently received a $4,000 donation from local nonprofit Josh’s Heart, Inc., which will help pay the tuition of two future students in the program.

Josh’s Heart is operated by Nahhas and his wife, Dawn, the organization’s president. They started it two years ago following the death of their son, Joshua. The 32-year-old was homeless and struggled with alcoholism before passing away of liver failure.

“We always want to work with a program that deals with addiction and homelessness, and we saw this as an opportunity to reach out even further,” Nahhas said. “The [construction] class is the type of program that we wanted our son to be involved in.”

The construction training program is a one-week course where students can learn skills in the construction trade, such as electrical work. Associated Builders and Contractors Northern California Chapter (ABC NorCal) has partnered with The Salvation Army, providing the instruction and curriculum for the program. Since its official launch over a year ago, 17 students have completed the course and 12 of them have found employment following graduation.

“This donation is so impactful in many ways,” said Major Martin Ross, Sacramento County Social Services Secretary. “It’s humbling to know that we can use these dollars to help change lives, but it’s coming from Josh’s Heart—a great cause in itself.”

This Salvation Army program isn’t the only project that Josh’s Heart has supported. The couple has organized a backpack drive and clothing collection for the homeless, distributing more than 500 backpacks in the past year. Also, last Thanksgiving, they delivered over 100 meals to a local church serving the homeless.

“It doesn’t take much to give a little hope,” Dawn Nahhas said. “My love for the construction program is because it’s giving hope and hopefully sustaining a healthy life. To some people, it’s just a training, but to these students, it’s everything. And I’m glad we’re able to help in Josh’s name and honor him.”