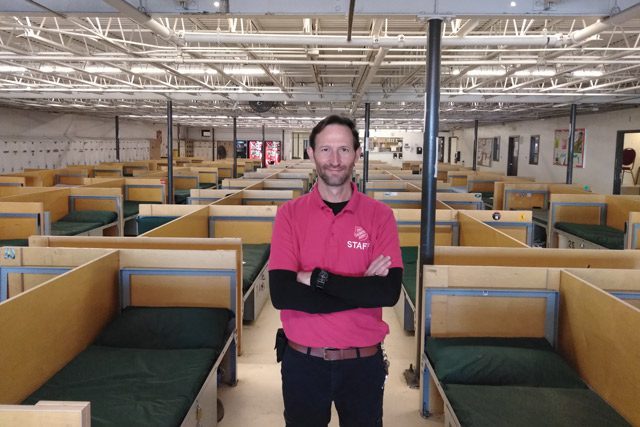 Rising through the Crossroads ranks

Mike Hernandez, 49, found himself at the Denver Rescue Mission, homeless and out of options two years ago.

He had just returned to the United States, where he hadn’t lived in nearly a decade. He’d spent the previous eight years in Mexico and Europe working as an interpreter for his girlfriend’s father on a business deal. The deal fell apart while he was in Portugal, leaving him single, broke and stranded. The State Department bought Hernandez a one-way ticket back to the United States, where upon arrival, U.S. Customs quickly confiscated his one identifying document—his passport—until he could reimburse the flight cost.

Being in a strange city was frightening, he said.

“In the past, I had friends or family, or at least I thought I did,” he said.

With both parents deceased and his two siblings unable or unwilling to help, Hernandez secured a bed at the Denver Rescue Mission’s overflow shelter. He didn’t feel safe there and someone pointed him to The Salvation Army Crossroads Resource Center, a men’s shelter in Denver’s rapidly gentrifying River North neighborhood. Once there, Hernandez slept on one of the center’s mats at night, while during the day he went from one resource to the next, trying to stay alive.

The Crossroads Resource Center rents beds to men for $60 a week—an approach that offers benefits beyond the traditional homeless shelter for motivated individuals. Crossroads also has an additional 241 mats available for free on a first-come, first-served basis.

“I decided to volunteer at Crossroads so I’d have a guaranteed bed every night while I waited for my documents,” he said.

Within six weeks, Hernandez was promoted to volunteer coordinator, working hard to make sure the rosters were up to date and that everyone was following the rules.

“I was so grateful to not be outside, so I happily did it,” he said.

Around the time Hernandez received his documents, he applied for and was offered a job elsewhere, but a staff member encouraged him to apply to be a shelter worker, a paid position at Crossroads.

“Even though it paid less than the other job, I took it. I was so grateful for what they’d done for me and I really appreciate what they do for others,” he said. 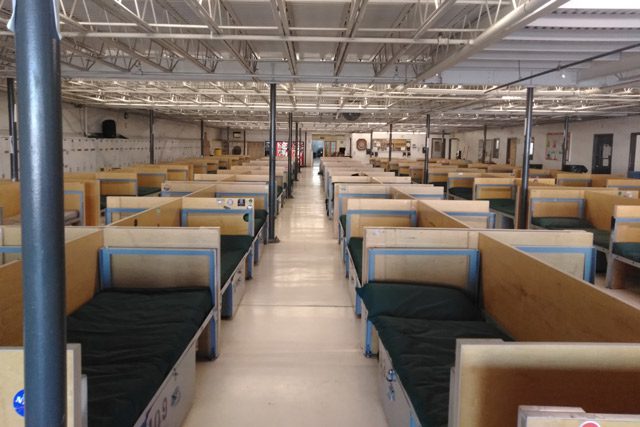 Hernandez worked diligently for five months before being promoted to shelter manager. Whatever shift was needed, day or night, he took it, and after seven months, he was promoted to his current job title: transitional housing manager. He manages the 244 beds available for rent, ensuring men pay their fees and keep their beds clean, and informing them of options like the nearby Salvation Army Harbor Light rehab center.

The Salvation Army believes this approach—renting the beds—will allow the men to find and maintain jobs and eventually permanent housing, since they won’t have to line up for a mat every afternoon at 4:30 p.m. and will have a place to store their things. Saying “goodbye,” Hernandez says, takes hard work and tenacity.

After living at Crossroads for 16 months, Hernandez repaid his debt to the State Department and saved up enough money to buy a car, and then, a few months later, to rent a studio apartment. He now lives in Lakewood, around 10 miles from Crossroads.

As a child, Hernandez bounced between living with his alcoholic, abusive father, intellectually challenged mother or his grandmother, so he understands the demons with which the men at Crossroads wrestle.

“Coming from a background where there was no money, plus abuse and alcoholism, I can empathize with people who haven’t had opportunities,” he said. “When I was a kid, I didn’t think I would make it past age 27. I thought I’d die in the ghetto; it’s by the grace of God I’ve escaped violence or jail.”

Today, Hernandez loves his job at Crossroads, in large part because of Shelter Director Captain Eric Wilkerson. “He’s so supportive and compassionate and I learn from him every day,” he said.

During the time Hernandez has been at Crossroads, Wilkerson has seen him grow and thrive.

“From time to time I see a man come into The Salvation Army and make real progress—life-changing progress,” Wilkerson said. “This always happens when a man finally realizes that life is not about what he takes from it for himself but what he gives of himself to others. Few come to this realization. I am so grateful to God to see that Mike has made this connection and that he continues to mature to his potential.”