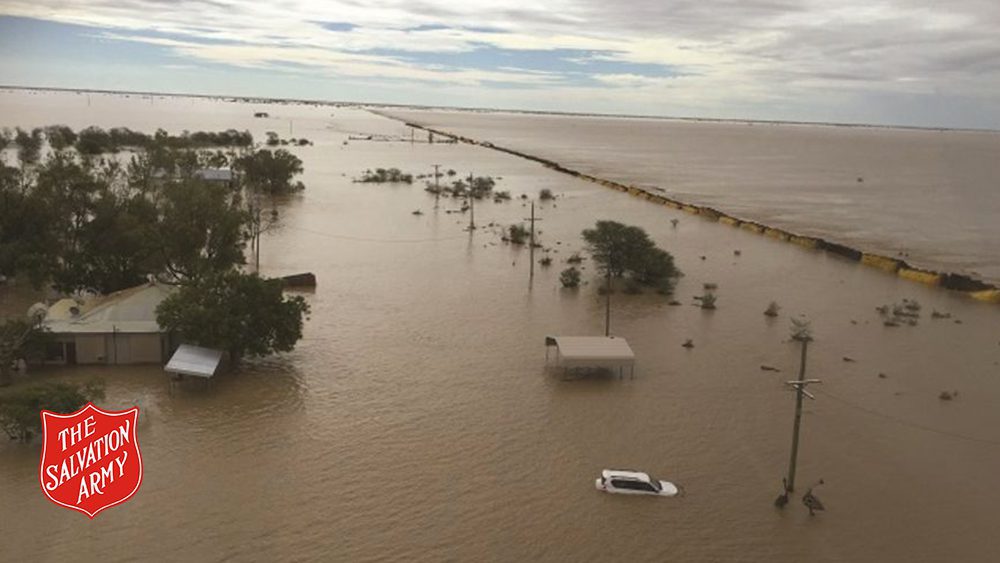 Australian Prime Minister thanks The Salvation Army for its relief efforts.

The Salvation Army in Australia responded after severe rain caused major flooding in northern Queensland. In the coastal city of Townsville, the monsoon downpour amounted to in excess of one meter of rainfall—about 40 inches—more than 20 times the average for the time of year.

Once the rain stopped, The Salvation Army Outback Flying Service chaplains—a helicopter ministry—assessed the damage across a vast rural area and spoke to farmers who had suffered flooding and stock losses; in some cases they were unable to leave their homes.

“I’ve never seen so many dead cattle,” Lt. Simon Steele reported from the air. “I’m flying over the main railway line from Mount Isa to Townsville and it’s just destroyed.

“I was talking to one property owner this morning and they showed me a picture of their property that was completely inundated with water, halfway up their home. He said there’s not even a place for a helicopter to land.”

Steele asked Salvationists to pray for farmers as they come to terms with huge financial losses and the death of so many livestock.

“That’s what makes a difference, it really does; they just want to know that people are thinking of them and that they care,” he said.

In Townsville, Salvation Army Emergency Services volunteers distributed donated fresh bread, fruit and vegetables to people hard hit by the floods, who were busy cleaning out destroyed furniture and goods and hosing out mud and debris. Personnel serving at emergency recovery centers in the city have assisted hundreds of people, giving out gift cards, listening to stories and referring people to The Salvation Army’s financial counseling services.

“We know from experience that when a disaster of this magnitude hits, it takes many months, even years, to recover,” Queensland Divisional Commander Lt. Colonel David Godkin said. “The Salvation Army is committed to standing alongside communities in Townsville for the long haul. We will provide personalized support for as long as it takes.”

Godkin also met the Australian Prime Minister Scott Morrison, who was touring flood-affected areas. “He came over and shook my hand and thanked me for what The Salvation Army is doing.”

With assistance being offered from five specially-opened hubs, The Salvation Army has helped hundreds of local residents with immediate financial support through electronic cash and store/supermarket gift cards. Teams are also providing a listening ear, emotional support and encouragement to people, many of whom have lost everything in the floods.

“It’s not a lot for people who have lost so much, but people are just so grateful to receive something in their hands here and now,” said Major Sue Hopper, Acting Area Officer, North Queensland. “Many are overwhelmed and can’t believe what we’re giving them. A few of the men have cried, too.”

From reports by Simone Worthing and Lauren Martin, Australia Territory