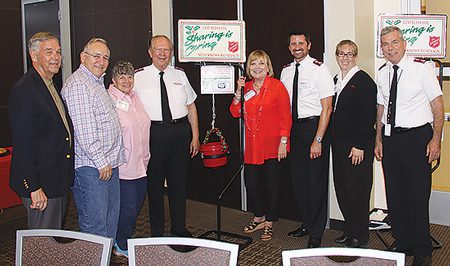 Two new members of the Phoenix Advisory Board, JoAnn and Joseph Callaway, launched a new program to raise the profile of Salvation Army kettles in Arizona this December—Real Estate Wednesdays. Designed to involve the entire real estate industry in Phoenix and serve as a prototype for other markets nationally, the pair has engaged industry volunteers to ring at more than 200 locations on each of the three Wednesdays prior to Christmas in December.

The Callaways are icons in the real estate industry, having sold $1 billion of real estate in their first 10 years of business and landed on the New York Times Bestseller list for their book, “Clients First, the Two Word Miracle” (Wiley, 2013).

“If you are looking for a good citizen, just look for a realtor,” JoAnn Callaway said. “They care about their neighborhoods and every member of their community.”

“Our challenge for this first year has been to control the enthusiasm,” Joseph Callaway said. “We want this year to be a model for the future.”

The Callaways made it an easy program for their industry friends to embrace, creating all the collateral material necessary from emails and postcards to flyers and posters, along with a unique website (realestatewednesdays.com). They are using traditional and social media along with all the personal touches that have become hallmarks of the Callaways’ success.

“We plan to stir the pot—or I should say kettle—with a little friendly competition,” JoAnn Callaway said. She plans to mail more than 6,000 clients to tell them when and where to bring their wallets and checkbooks.

Fellow advisory board member Tom Leyda and others are working closely with corps officers and Real Estate Wednesdays volunteers to personally oversee the coordination and execution of the project.

“This level of involvement is unprecedented in this market and I would deem rare for most cities in America,” said Major John Brackenbury, Valley of the Sun program coordinator and corps officer of the Phoenix Citadel.  “Our officers are exceedingly grateful and absolutely thrilled to know such a vast majority of kettles will be covered by such an enthusiastic group of volunteers.”

“This year Phoenix, next year the world,” predicts Joseph Callaway. “The Salvation Army and the home ownership industry—the start of a beautiful friendship.”