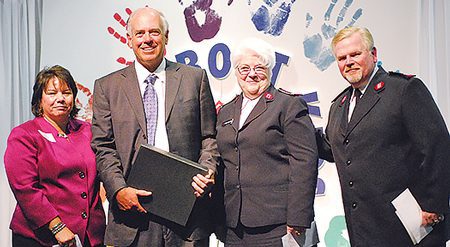 Portland celebrates the power of ‘one’

The Salvation Army in Portland, Ore., held its 19th annual All About Kids dinner Sept. 24, presented by Fred Meyer at the Oregon Zoo Cascade Crest Ballroom. Over 350 people attended the dinner themed “It Starts With One.”

Guests discovered the power they have as an individual to make a difference. By the end of the night, over $455,000 (and counting) was donated to youth programs in the Portland Metro area, exceeding this year’s goal by more than $150,000.

The Salvation Army established three new annual awards to recognize new partners and longtime Meyer Founders Award went to Don Pearson of Wells Fargo for “establishing new beginnings for our youth.” The Hoffman Construction Partner in Excellence Award recognized Alec Shebiel of Toys for Kids for “continuous contributions to the physical, emotional and spiritual impact of our young people.” The Atiyeh Legacy Award was presented to Wayne Drinkward of Hoffman Construction for “creating opportunities and lasting changes with your investment through the years.”

Lt. Colonel Judith Smith, Cascade divisional commander, welcomed guests. Becky Tymchuk, Portland Metro Advisory Board chairperson, emceed the evening and explained how “it all starts with one: one food box, one kind word, one helping hand, one mentor, one volunteer or one donation.”

Attendees watched a video (youtu.be/_swpRgNTz6k), created by a woman who, along with her mother, received services from the West Women’s and Children’s Shelter.