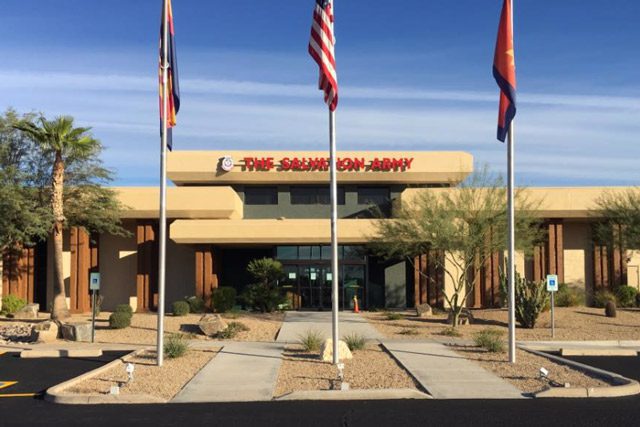 Bi-monthly gathering for those with dementia, caregivers

Dementia can be an isolating disease, both for those suffering from it and their caregivers.

The Salvation Army, along with other service providers in Arizona, are hoping to combat that by bringing individuals tied to the disease together as part of a bi-monthly Memory Cafe.

“When someone you love develops Alzheimer’s or dementia, the tendency first and foremost is to try to keep them at home in a familiar environment,” said Jennifer Drago, Chief Strategy Officer for SunHealth in Surprise. “But for both caregivers and people with memory loss, we know if we can keep them socializing and participating in engaging events, it’s better for everyone.”

That’s where the Memory Cafe comes in. Hosted every other week at The Salvation Army Sun Cities West Valley Corps, led by Captains Kathy and Mark Merritt, the cafe provides a social outlet for those dealing with dementia, including a support group for caretakers and activities for individuals with memory loss.

The cafe is modeled off a similar initiative in Tempe, which was the first of its kind in the state as part of a new effort called Dementia Friendly America, said Lori Nisson, Director of Family and Community Services at Banner Alzheimer’s Institute.

The goal is to help the common American understand dementia using simple messaging that’s not tied to medical jargon.

“Part of it is informing people that dementia isn’t a normal form of aging and it’s caused by a disease of the brain,” Nisson said. “People can still live a really good quality of life with dementia, and as community members, there are things we can do to support that.”

Seeing the success in Tempe, partners at SunHealth, BannerHealth, The Salvation Army and Benevilla decided to launch a similar effort in Surprise.

The partners hosted their first two cafes in October with an average of 43 attendees.

People came with their spouses, family members or loved ones and joined around tables to drink coffee and get to know each other. From there, the caregivers went to another room for a support group led by a trained facilitator. Those with memory loss stayed in the same room and participated in life enrichment activities, such as singing and dancing.

“Family members don’t even think of themselves as caregivers,” Drago said. “Caregivers are paid people (in their minds) and family members are doing what they do, which is to take care of their loved ones. But the burden and stress on family members put in a caregiver situation is immense.”

The cafe helps by providing social interaction for all while also facilitating education and information sharing.

“It’s not just about the camaraderie,” Drago said. “They’re getting active information that could help them, they’re sharing strategies, and they’re also getting the socialization and the rest.”

“We’re going to blink and that year will be here,” Nisson said.

Both Nisson and Drago praised the community partners who helped make the Memory Cafe possible, saying it’s an easy partnership that came together quickly.

“We’re all kind of serving this population together,” Drago said.“Really from the very first time we talked about it, it didn’t take a lot of effort or motivation. We all said, ‘yes, we need to do this.’ It’s amazing.”