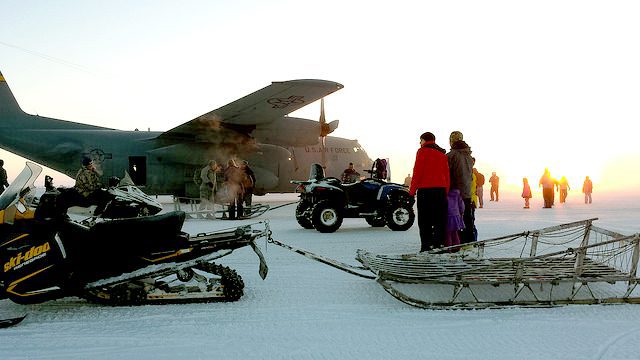 Each year Operation Santa Claus ensures that Santa Claus, Mrs. Claus and their helpers receive safe transport to some of Alaska’s remote villages. For over 25 years, The Salvation Army and the Alaska National Guard have partnered for this project to brighten the holidays for residents of rural Alaska.

Before expeditions take place, Salvation Army volunteers wrap hundreds of gifts for distribution to the children. The visitors bring not only toys and books but also warm clothing, including coats. They even bring ice cream and fresh fruit–rare treats in these remote locations.

“It was a series of firsts for me,” Hudson said. “[It was my] first time in a C-130 [a military transport aircraft], first time traveling with Santa and Mrs. Claus, first time being somewhere that I had no clue where it was on a map until afterwards–and even then not 100 percent sure, first time on a dog sled–although pulled by a snowmobile, first time seeing my breath inside a plane, and the first time being on the shoreline of the Bering Sea. In the midst of all the firsts, there was the familiar sound of appreciative people, who thanked me for taking time to come and spend time with them, although I was the one truly blessed.”

The Shishmaref event took place at the village school, which serves nearly 300 children, from pre-kindergarten through 12th grade. The Shishmaref School traditional dance group performed for the visitors, before inviting the guests to join them for the final dance..

“Shishmaref was the ideal of what Operation Santa is: them sharing their culture with us, while we provide a wonderful Christmas celebration for the community,” said Jenni Ragland, Alaska divisional service extension and emergency disaster services director. “It is really something very special.”

The visit left a lasting impact on the village.

“Shishmaref is still abuzz with the excitement of Operation Santa,” said Moon McCarley, reading and RTI (response to intervention) facilitator at the school. “I love hearing from students what they got from Santa. Yesterday everyone in school enjoyed bananas. A good time was had by all. It is clear that an enormous amount of work goes into this. We really appreciated [the] visit.”