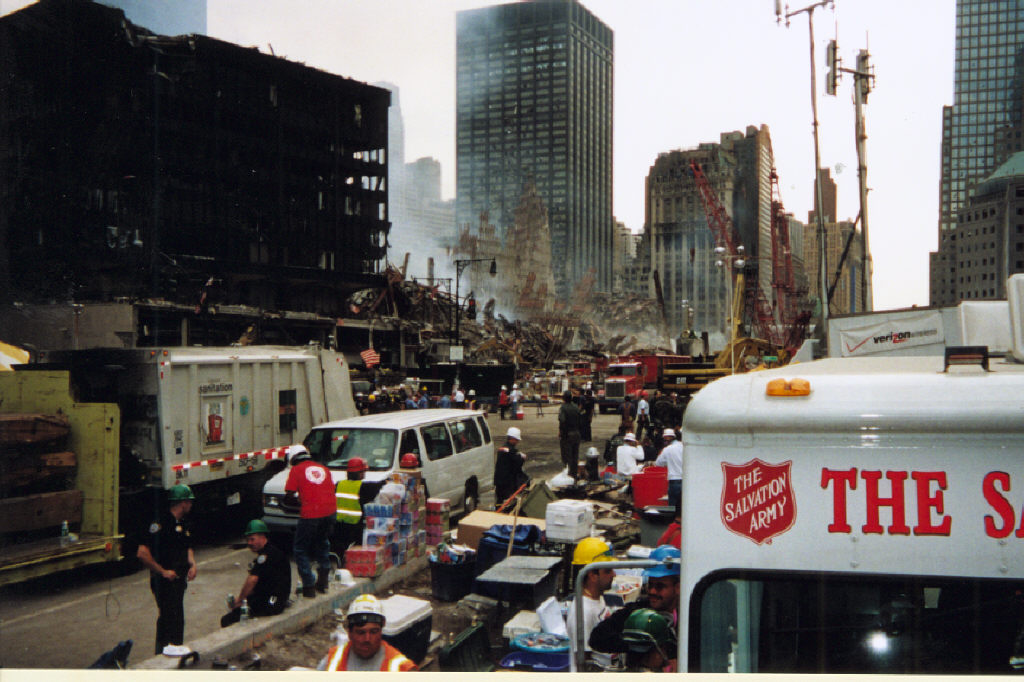 Majors Bonnie and Les Bussey are retired Salvation Army officers providing pastoral care for active officers in the USA Southern Territory. During the 9/11 terrorist attacks, they were stationed at the Cincinnati (Ohio) Citadel Corps. Here they reflect on their experience serving at Ground Zero in the weeks following the attacks.

In October 2001, the Divisional Commander of The Salvation Army’s Southwest Ohio and Northeast Kentucky Division issued an urgent call to officers to help with the cleanup of the 9/11 catastrophe in New York City.

Majors Bonnie and Les Bussey offered to serve for a week there. When they arrived they were assigned as chaplains and helpers at The Salvation Army Canteen that was located at the Medical Center in downtown New York.

It was there that bodies were being brought as they were located from the debris of the fallen World Trade towers. The place was crowded with policemen, firemen and forensic scientists whose job was to receive and identify bodies and body parts.

“We were advised to look for anyone who might need a word of encouragement, counsel or prayer and speak with them,” Les Bussey recalled of the 16-hour days filled with ministry.

“One of my vivid memories was not only working in the Canteen, but walking amongst the firemen, who sipped their coffee as they ate the sandwiches we made,” said Bonnie Bussey. “One fireman was extremely distraught and was sitting all by himself, staring into space. I kept watching, not wanting to interrupt his thoughts.

After quite a while, I went over and said nothing. I put my hand on his shoulder…and the floodgates opened. He’d been late for his shift that morning and lost so many of his friends from his fire station. He was feeling lost, lonely and guilty. I sat with him for a long time, tears flowing as he continued to weep and talk. My heart continued to break as I heard similar stories.”

Major Les Bussey also remembers approaching a man sitting alone on a picnic bench, eating a sandwich with coffee. “He seemed very discouraged,” he said. “I was led by the Holy Spirit to go and sit at the table with him. I went and asked him how he was doing.”

He replied: “I am a forensic scientist; this morning I was given a lady’s hand to try and identify. The lady’s hand was tightly closed. When I pried it open, there was a child’s hand in it.”

“I was shocked and saddened by his words and understood why he looked so downcast and discouraged,” said Les Bussey. He prayed with the man and asked God to help him in the sad work he was required to do.

“When I returned to the canteen, I began to reflect on where this person might have been when this tragedy occurred: Was she a mom on the plane that flew into the tower and she was tightly holding the hand of her precious child as it crashed into the building? Was she a mom who ran to the daycare at the tower to rescue her little one when the tower came crashing down?

No one will ever know the full circumstances of this sad happening.

May our God be with all who graciously helped in those terrible days 20 years ago as they faced the tragic consequences of this evil act. It is my prayer that evil will perish and righteousness will reign throughout our world.”