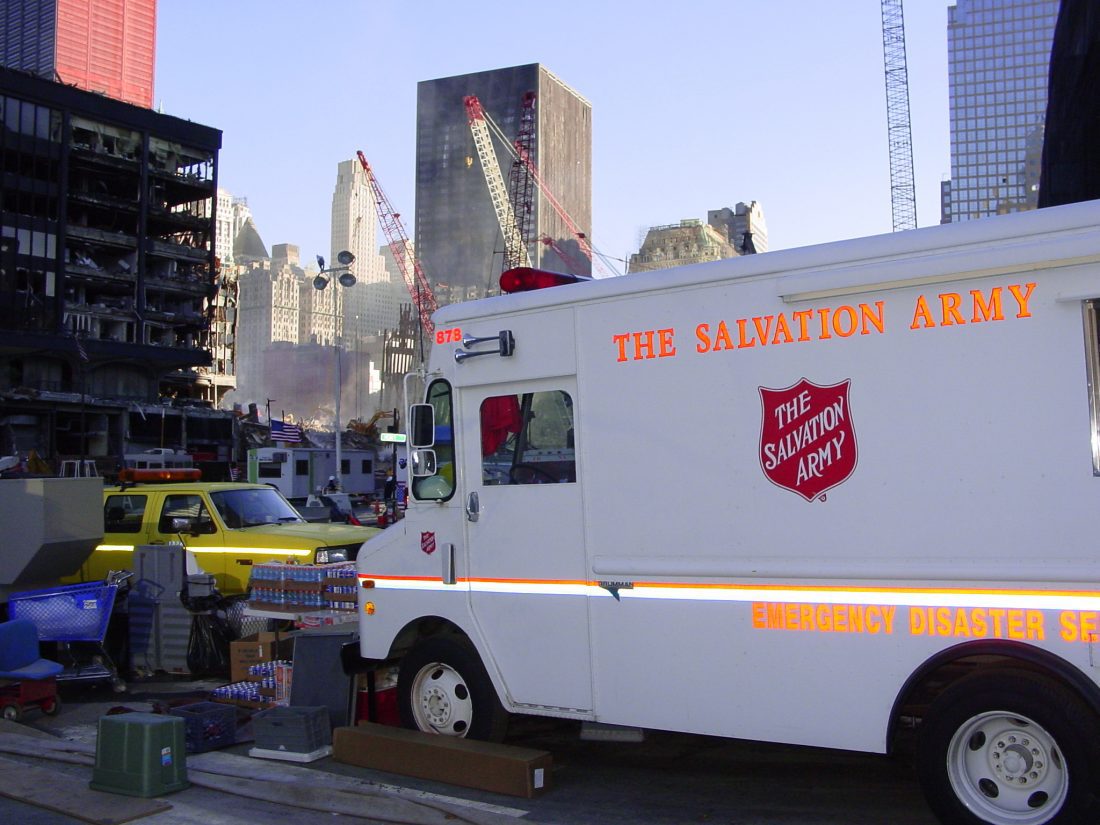 Twenty years ago, The Salvation Army was one of the first relief organizations to arrive at Ground Zero in New York City—the scene of the terrorist attacks on the World Trade Center twin towers. Over the years, Salvation Army leaders and volunteers have shared what it was like to serve in the wake of a disaster like no other.

The Salvation Army was on the scene immediately.

“There was a canteen in place serving the workers 22 minutes after the first plane hit and before the second building was struck,” wrote Former Western Territorial Commander Commissioner James Knaggs, in “Remembering 9/11,” a collection of reflections from three Commissioners. “That very unit and its workers had to abandon their spot so as to escape the demise of the towers and reach safety to serve others.”

Commissioner William Francis, in “Remembering 9/11” recalled what it was like to arrive at Ground Zero in the early morning hours of Sept. 12, 2001. “It remains the most indescribably destructive scene I have ever witnessed,” he wrote. Yet, during prayer, he said he sensed Jesus’ presence. “We knew that we were not alone. I could almost audibly hear Jesus saying to his early 21st century disciples, ‘I have told you these things, so that in me you may have peace. In this world you will have trouble. But take heart! I have overcome the world’ (John 16:33).”

On the ground in New York, the Pentagon and Pennsylvania

In the first year following the attacks, The Salvation Army assisted more than 121,000 people, providing grief and mental health counseling, financial assistance and other basic social services. “September 11 Changed our Lives Forever,” a one-year reflection from 2002, revisited that day, setting the scene both before and after the attacks. It includes vignettes from those who served in the aftermath, including Western Territory Officer Major Debi Shrum and a Salvation Army volunteer, Bill Angle, from Reno, Nevada. Sue Warner, then New Frontier Managing Editor, shared her experiences reporting from Ground Zero.

Warner was in New York six weeks after the attack to report on the Army’s relief work. In the course of her newsgathering, she spoke to a number of taxi drivers. Her last taxi driver gave a significant and sacrificial gift to The Salvation Army.

After arriving by cab at Ground Zero, when she asked what the fare was, the driver said there was no charge. She tried to give him a tip, but he would not accept it. He explained that he appreciated what The Salvation Army was doing, and thanked her for their presence.

“It will never be counted in the $88 million in donations that the Army has received,” Warner said. “But it was an incredible gift of love.” 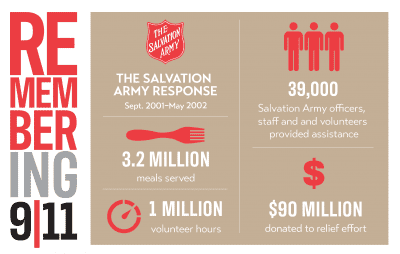 Descending into the pit

Commissioner Joe Noland was Eastern Territorial Commander at the time of the attacks. In “Noland recalls events of 9/11,” he responded to those who asked why The Salvation Army didn’t receive as much media coverage as other relief organizations. He also shared what happened when he took then international leader General John Gowans down into the pit: “A fireman put his arms around him and whispered into his ear, ‘You are the unsung heroes down here.’”

“Ten Years Later, The Salvation Army’s Response to the 9/11 Attacks,” provided a recap of The Salvation Army’s efforts in the aftermath of the terrorist attacks. After being one of the first relief organizations to arrive on the scene, the Army continued its recovery efforts throughout the clean-up process. In the ensuing months and years, The Salvation Army assisted thousands of people with both practical assistance and emotional and spiritual care.

And now, after 20 years, see how one woman’s experience on Sept. 11 turned from terror to grace, and how it altered her life forever.

As she writes, “God was a present help and refuge through one of the worst days in American history and the worst day in our lives, for sure. Because of that experience, we were molded more into his image, and we enjoy a deeper relationship with him.”