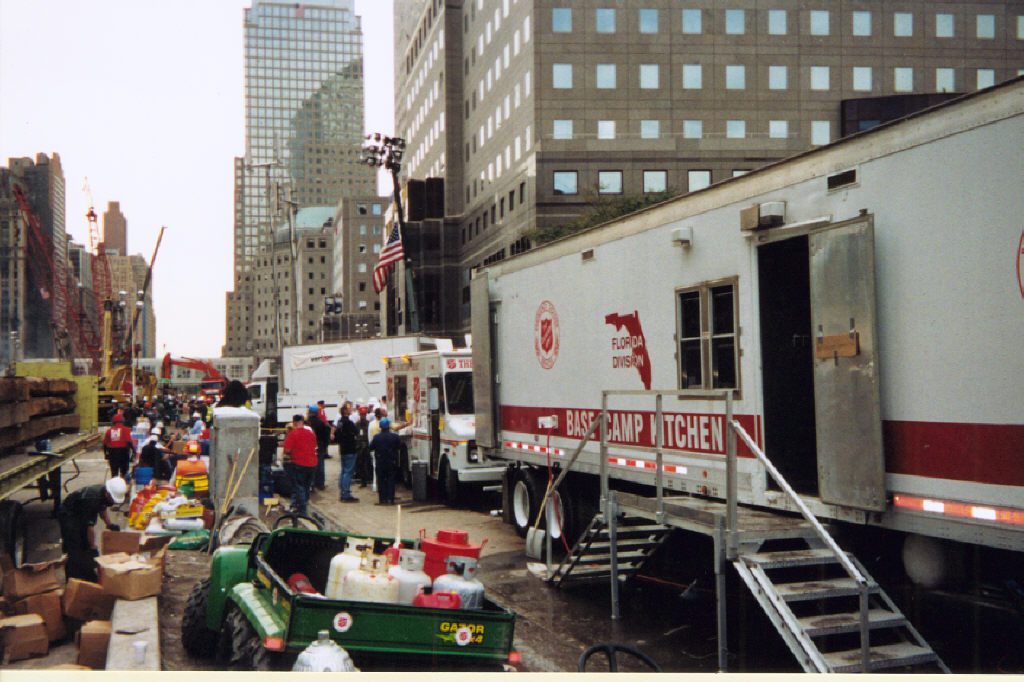 Ten years later, The Salvation Army’s response to the 9/11 attacks

On Sept. 11, 2001, a series of coordinated terrorist attacks on passenger airliners left thousands dead and hundreds of thousands more in need. The Salvation Army was closely involved with the recovery process for survivors in New York, Pennsylvania and Washington, D.C., following the tragic events of 9/11.

Arriving within a half-hour of the first plane hitting the North Tower of the World Trade Center in New York City, The Salvation Army was one of the first relief organizations to arrive on the scene at “Ground Zero” and provided extensive support for relief workers and volunteers. The Army continued to support recovery efforts throughout the months-long clean-up process. In the months and years that followed, The Salvation Army assisted thousands of people impacted by the September 11 attacks with practical assistance as well as spiritual and emotional care.

The Salvation Army continued to serve the immediate needs of those who were displaced following the attacks in a variety of ways, including rent and utility assistance, job placement and referrals for health care needs.

In total, the Greater New York Division of The Salvation Army served more than 59,000 people through 9/11-related, long-term assistance programs.

In response to the simultaneous attack at the Pentagon, The National Capital and Virginia Division of The Salvation Army:

The New Jersey Division of The Salvation Army played a major role in relief efforts in New York by:

Following the crash of United Flight #93 outside Shanksville, Pa., The Western Pennsylvania Division of The Salvation Army responded to the needs of relief workers and victims’ families at the crash site by:

The American public donated $86 million to The Salvation Army to respond to the 9/11 attacks. The majority of the money was used within the first year and a half following the attacks to provide practical items and services including: food for rescue workers and volunteers, steel-toed boots, socks, eye drops, rest stations and other items related to the recovery and clean-up at ground zero. Remaining funds were allocated to provide for longer term needs of victims’ families and others affected by the tragedy.

Meals and relief services were also offered at the Pentagon and at the crash site of United Airlines Flight #93.

From a national news release.