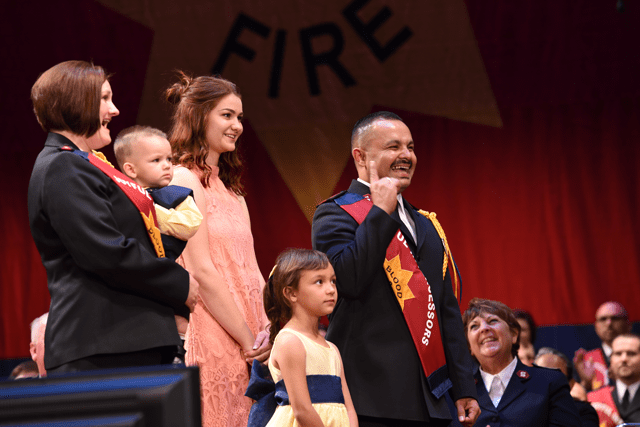 ‘Mobilize – Come to the Water’ sails into Long Beach

2017 Commissioning weekend includes international leaders
The Western Territory welcomed international leaders General André Cox and Commissioner Silvia Cox, World President of Women’s Ministries, to Hawaii and then to Southern California for the “Mobilize – Come to the Water” 2017 commissioning weekend, June 2-4.
The international leaders took part in two worship meetings at the Hawaii Ray and Joan Kroc Corps Community Center, with both programs opening with worship in hula and song. The visit included a tour of the center and an opportunity for the General and Territorial Commander Commissioner Kenneth G. Hodder to lay a wreath at the USS Arizona Memorial in Pearl Harbor, which is built over the remains of the sunken battleship USS Arizona, the final resting place for many of the 1,177 crewmen who lost their lives in the Japanese attack on Pearl Harbor in the Second World War. 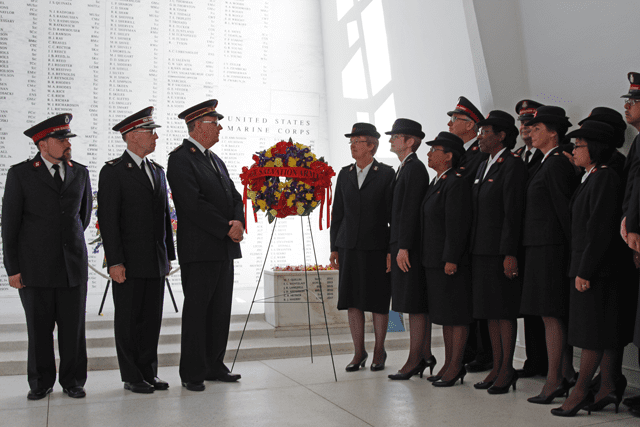 After traveling to California, the Coxes joined Salvationists and friends on the lawn outside the College for Officer Training at Crestmont to witness the commencement of the 50 cadets of the Joyful Intercessors Session.
In her commencement address, Silvia Cox urged the cadets to pray continually, ask for prayer, and to decide to trust and be happy and obey. “If you forget to pray, it is like having a missing stitch in a fisher’s net,” she said.
At the first main session on Friday night, the General reflected on Isaiah 44, and how it relates to the recent historic drought that plagued California. “Since my last visit [to the territory], the drought has ended,” he said. “But you know what it is to live in dry land. The blessing of rain is a reminder that God gives us hope in times of challenge.” 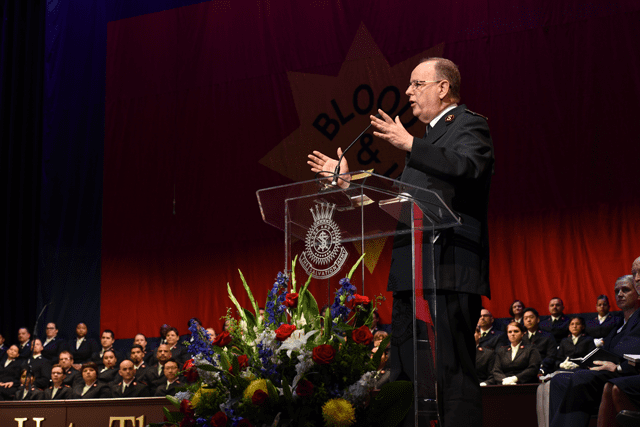 The following night, local officers from across the Western Territory took center stage during a first-time Local Officer Mobilization Dinner. The General thanked attendees for their hard work and dedication to the mission and implored them to turn their attention—if it was not already there—to young people. “You need to be thinking about mentoring and preparing those that come after,” he said. “The responsibility is not about occupying the space and exercising our leadership. It’s about how we develop the next leaders.”
The day finished with almost 3,000 people attending the premiere of the new musical Legacy, written by Kevin Larsson, Karl Larsson and Keith Banks. The musical tells the real-life story of the Louangamath family, who fled Laos by boat at the height of the Cold War. Ending up in California, Phon Louangamath and his family linked up with The Salvation Army in Santa Rosa and later opened the Army’s first Laotian corps in 1989 in Seattle. Legacy also told the story of Daniel Adams who became separated from his step family and was eventually reunited by The Salvation Army Missings Persons department. The two stories intertwined as Adams married one of the Louangamath girls and the two became Salvation Army officers.
“What legacy do you choose to leave in life?” Kenneth G. Hodder asked the audience. “If you choose to leave a legacy based upon love, it will begin and end at one place—the cross of Christ.”
In the Sunday morning Commissioning and Ordination Ceremony, territorial leaders Commissioners Kenneth G. and Jolene K. Hodder received the cadets, individually or as couples. She read their “life verses” before he commissioned and ordained each person as a minister and as a lieutenant in The Salvation Army.
Later in the day, at the Service of Appointments, the Territorial Commander announced the Western Territory’s World Services and Self-Denial gift of more than $8.1 million. The General responded with thanks and gave a challenge to continue to “be extravagant in your giving because God has done so much for us.” 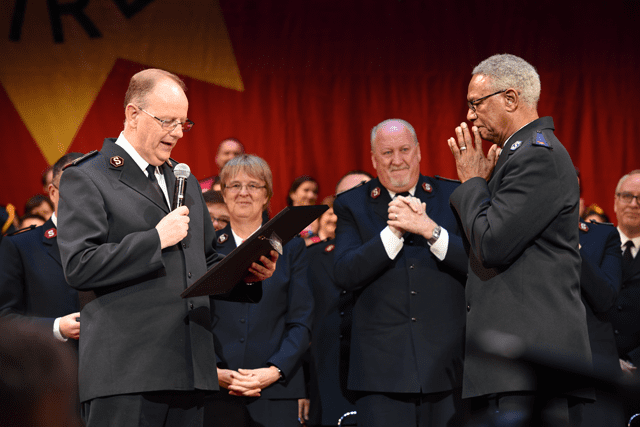 In a surprise presentation, Kenneth G. Hodder called to the stage Envoy Joseph Moore, long-serving Salvationist at the Bell Shelter in Southern California. The General admitted Moore to the Order of the Founder, The Salvation Army’s highest award. Reflecting the wording of the citation, the General told Envoy Moore: “You are proof of God’s power to change lives and to use people for redemptive purposes.”
The territorial leaders then presented the 50 new lieutenants with their first appointments as Salvation Army officers.
Find full coverage of each event at salar.my/WestCommissioning.