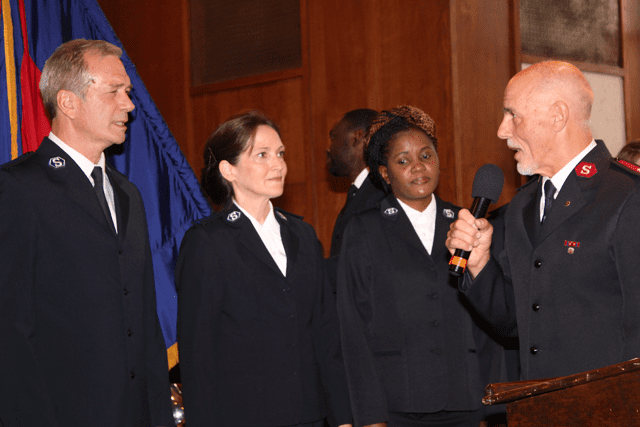 Meet the National Ambassadors for Holiness

Bill and Diane Ury kneel at the Mercy Seat to sign the Soldier’s Covenant upon their enrollment in Raleigh, North Carolina.

To emphasize The Salvation Army’s place as a holiness movement and call people to holy living, National Commander Commissioner David Jeffrey named Dr. William (Bill) and Diane Ury as National Ambassadors for Holiness as of July 2017.
Prior to becoming Salvation Army soldiers of the Raleigh (North Carolina) Corps in May 2017, the Urys served as ordained ministers within the Evangelical Methodist Church.
In this new role, the Urys will serve as teachers and communicators of the evangelistic mission of the Army, its spiritual formation, and holiness doctrine and history. They will serve as guest speakers at events and training colleges across the U.S., and will support the relationship between Asbury University and The Salvation Army.
The Urys are responsible for encouraging and nurturing the holiness movement in The Salvation Army, engaging Salvationists in seeking the life of holiness, proclaiming the doctrine of holiness, and emphasizing the practice of holy living as a continuing characteristic of Salvationism.
Bill Ury completed holds a doctorate in Theological and Religious Studies from Drew University (Madison, New Jersey). He was Professor of Systematic and Historical Theology at Wesley Biblical Seminary (Jackson, Mississippi) from 1989–2012, and pastored the Elizabeth City, North Carolina, Evangelical Methodist Church from 2012–2017. Diane Ury holds a master’s in theology from Wesley Biblical Seminary.
Here, the Urys share more about their new role:

NFC: What attracted you to The Salvation Army, and to becoming soldiers this year?

Diane Ury: The Salvation Army has been attractive to me over the years primarily because of the people I’ve known who are Salvationists. Beginning at Asbury College in the early 1980s, most of the women who lived on my hall were “Sallies.” …I experienced being deeply loved by them as a friend and sister in Christ, like I’d never experienced before. Since then, I’ve been challenged by the lives of my many friends in The Salvation Army—their deep devotion to Jesus and resulting sacrificial care for the hopeless and marginalized is genuine. Regardless of the difficulties and pressures upon their lives and ministries, I’ve observed their clinging to Jesus out of love for him, and their commitment to their call and mission. These are rare and attractive traits.
I’m a Wesleyan, theologically; an ordained elder in a Methodist denomination…The foundational theology of The Salvation Army is just so right. To become a soldier in its ranks makes me feel set free to become what I’ve known I should be for a long time, but didn’t make much headway, practically speaking. I’m thrilled to be immersed in a life that joins the Wesleyan Holiness theology that I love with a body that lives it out, on behalf of the people for whom Jesus’ heart breaks.

Bill Ury: I have loved the Army since my college days. My roommate dated a Salvationist and that meant that soon the Booths and the Brengles were part of my daily life. The last 20 years of ministry, primarily to officers, has steadily deepened my commitment. When Commissioner Jeffrey shared his vision with us of serving in this capacity our hearts leapt for joy. It is an unmitigated blessing to be able to offer ourselves in this small way to encourage those that we admire and now walk with arm in arm following Jesus.

NFC: What does “holiness” mean to you?

DU: Holiness is the essence of the Triune God—three persons, Father, Son and Spirit, relating in mutual, others-oriented, sacrificial, self-offering love. Holiness is the presence of that Holy One, who is more concerned with others than self. Holiness becomes our inheritance and our nature when we are yielded entirely to him, and become one with him through surrender and abiding faith. I used to think holiness was behaving well. But obedience is the overflow of love for him, of his love poured into and out of us. Holiness is his beautiful, loving presence indwelling us through the spirit who removes self from the center of our lives and recreates us into persons who bear his image and live his life of other-oriented love. Holiness is becoming God’s treasured possession, and a partaker of Christ. It’s the ultimate satisfaction.

BU: I am convinced that there are only two essence statements about God in Scripture. One is that he is holy. The other is that he is love. Every other aspect of his character comes out of the inseparable relationship between those two revealed concepts. The amazing thing about the salvation Jesus won for us and which the Spirit’s presence makes possible in us is that what he is in his nature is offered to each of us through the grace of redemption. Our characters can be formed by his nature. Life in Christ is to be a recipient of his self-giving holy love. If he indwells then the automatic result is holiness. But that reception must be followed with bestowal to another so that purity of heart is only true if our hearts are turned outside of themselves toward others.

NFC: Why is it important for holiness to have ambassadors?

DU: It’s interesting, isn’t it? Even in evangelical Christian America, “holiness” is an idea that is sometimes mocked, scorned and possibly vilified. (Not unlike Jesus himself, right?) “Christianity” has been watered down so that it’s merely a correct belief in something true, that gives one an automatic ticket out of hell, to heaven. It’s become a self-centered means for demanding happiness and prosperity and forgiveness from a “butler deity” who had better meet my expectations within my timeframe! The more American Christianity has become this kind of “evangelical,” the more corrupt our culture has become. Holiness is Christianity. There is no other kind. An ambassador is a champion, promoter, representative of a specified entity. I’m so grateful for the idea to have this role for reminding the Army of our rich heritage, to encourage us all to be unashamed of who we are in Christ, to be creative together in expressing holiness. Holiness is what people of our times are crying for, truly! We have the most wonderful truth to share this world. We need to encourage one another continually to press on with this message, regardless of what others say. I also believe that Jesus intends for The Salvation Army to be an encouraging voice for holiness within the worldwide Wesleyan Holiness tradition.

BU: I was reading a chapter in Samuel Logan Brengle’s “Resurrection Life and Power” recently that was helpful in this regard. He said that an ambassador is someone who has nothing to say about themselves. Their sole purpose is to point to the authority and interests of the one who sent them. Diane and I view this ministry as one that is a support for the central tenet of Salvation Army theology. Holy love has been the watchword of the Army’s ministry. It is always good to lift up the ideas that have formed an institution and to see how each era has succeeded in deepening those fundamental commitments. If holiness is central to the nature of God then there ought to be a strong emphasis on what that means. Our only desire is to point to our Lord, to his will for our lives as believers. We want to focus on his interests and to worship him with any and all in the Army that want the promises of the Holy One to be made known in our hearts and to be offered to the world.

NFC: How do you plan to encourage and nurture holiness in The Salvation Army?

DU: By presenting the personal, intimate longing of Jesus’ heart for us. By trusting him to help me offer Scriptural teaching, preaching, and writing about his strong mercy, and indefatigable pursuit of making us all he fully desires. I aspire for holiness to be understood as the most winsome idea ever heard, and experienced as the fullness of our intended created nature. The definition of “salvation” is holiness, not only justification and new birth. How beautiful that we are that Army. I get pretty passionate about this. I hope I don’t freak anyone out too much. The Bible is the source of our being nurtured in holiness. I love to teach people to love to read their Bibles, and to encounter Jesus there. Discipling people in the means of grace is so important. We must be in fellowship with others to grow in holiness. I hope to be involved in mentoring women as much as I’m able. These are all things I desire to participate in. I’m deeply humbled and feel very out of my league ministering with Salvationists. But I’m so excited!

BU: We have been invited by the territories to assist in officers’ councils, Bible conferences and Brengle institutes. We hope that all we do will revolve around that central motivating theme. We have been asked to research and write, as well as to be creative in social media for keeping the concept of holiness in discussion at various levels. We are here to serve wherever possible. Both of us are committed to discipling leaders so we are praying about how to invest in a few who will far exceed us in ability to teach and preach the holy love of God. But it must be said that this incredible, undeserved blessing of being soldiers as well as ambassadors is a clear witness to us of the overwhelming goodness of God and of the uplifting and encouraging ministry of the Army. We have already received so much from the Army. It is time to give back just a bit.
Sharing is caring!
Tags:
feature, June 2017, National Headquarters (NHQ), Vol 35 No 06