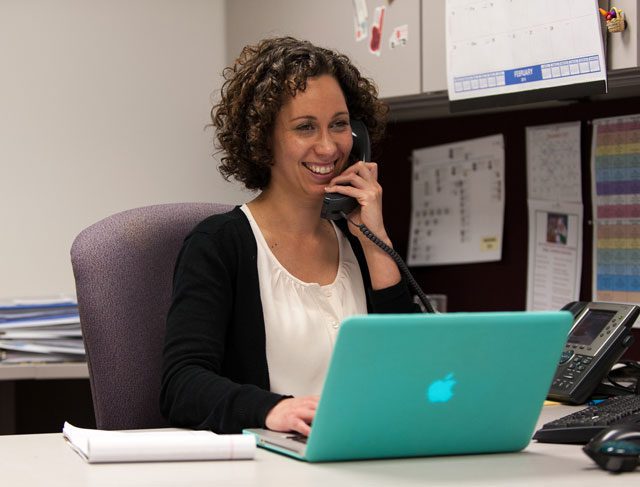 New Protecting the Mission director in the West

Melissa Jones stepped in as the new Salvation Army Western Territory director of Protecting the Mission this year, after working as an educational specialist at the College for Officers Training (CFOT) at Crestmont since 2011.

“I was [always] looking for something that was non-profit, so I could use my legal skills and experience of children’s rights advocacy in a positive way.” Jones said. “I think it’s important to have a heart and mind to really be aware of these issues and want to tackle them.”

Jones was born into a Salvation Army family, as her father, Major Brian Jones, is director of curriculum at CFOT and her mother, Major Gwendolyn Jones, is corps officer pro-tem at Compton, Calif.

She holds a bachelor’s degree in music business from New York University and completed law school at Loyola Marymount University.

Jones said that she has an advantage in this new role; in addition to her legal background, she grew up attending corps and camp, and knows The Salvation Army culture.

“Having that understanding and being able to bridge that gap between these policies that seem quite legal and difficult and to be able to explain them in a Salvation Army cultural lingo is helpful,” she said.

The Salvation Army implemented Protecting the Mission (PTM) in 2002 as a program to protect children from child abuse through employee screening, training, and limiting people’s interactions with children.

As director, Jones is responsible for overseeing policies and standards related to PTM, and monitoring any issues that arise.

At present, she said PTM must consider electronic communications and what role The Salvation Army should play in related situations.

“We’re talking about bullying, electronic communications with adults, and the effects of sexting,” Jones said. “We’ll probably have to address trafficking and the commercial sex industry. It used to be that pedophiles and those type of people were our only concern, but now we have really major concerns we have to deal with.”

While she acknowledges that the PTM policies do not always necessarily fit in specific situations, Jones said that one of her main goals is to help people see that PTM is beneficial for Army kids.

“Sometimes, people see rules are a burden, but rules and guidelines allow people to be more free and secure about interacting with the youth,” Jones said. “It’s not putting us behind, but rather above reproach so that our youth always feel comfortable with us.”