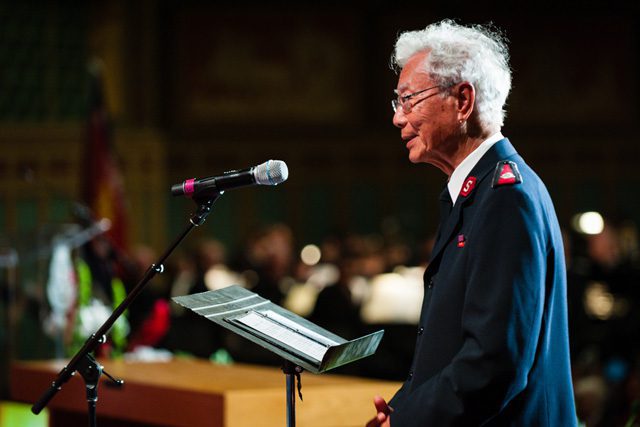 Love to China from Chinatown

My mind is rapidly flashing a montage of faces 100-years-old.

Traveling through several northern countries via Siberia, European Salvation Army officers arrived in Beijing, China, after two months. They learned the Mandarin language—a struggle in tears and laughter—so to begin their communication with the local people. They lived in paper-window screen houses.

Before dawn, a throng of poor people and beggars already wait in a long line outside the Army’s food stations in Shanghai for a bowl of hot porridge and a bread roll. They called the Army “Saved Life Army.”

During the 10-year cultural revolution (1966–1976), a Chinese Salvation Army officer in Qingdou folded the Army flag and hid it inside her pillow to avoid persecution. Lt. Colonel Check Yee served for 35 years as Corps Officer of the San Francisco Chinatown Corps (1959-1994), which under his leadership became one of the most celebrated corps in The Salvation Army world. During that period he enrolled nearly 700 soldiers, officiated at 500 marriage ceremonies, hosted a weekly television program, designed a state-of-the-art corps facility, and raised almost $1 million for relief projects in China. His service was recognized in 1997 with the Army’s highest honor, Order of the Founder.

Praise to our great God who is watching human affairs from his throne. I am exceedingly glad to know the good news that the Chinese government officially recognized and registered The Salvation Army’s services, making them legal. Salvationists and friends around the world have been praying that one day the Army’s work on China’s soil would again be acceptable. From 1949 when the Army ceased to work in China to this day, the 68 years of broken links are now reconnected.

I am most fortunate for the longevity granted by God who saved me as an eyewitness to see all the dramatic happenings. God never left China. His Holy Spirit is alive, comforting and protecting his people.

I have made many trips to China since 1980 for disaster relief and rebuilding, and visited with former Salvation Army officers; only one lieutenant—close to 100 years old—is still living. Thirty or more other officers had been promoted to Glory, one by one. When I was in their midst, listening to their stories of great faith, I found it difficult not to get choked up. Today there must be a celebration in heaven—I can imagine General William Booth, who left his heart in China, raising his voice, saying, “Comrades: Let’s have a congress!”

In summer 1977, I led the eight-member Western Territorial Youth Service Corps team to China. At the end of the journey, while at the airport, one member named Karen Lee asked me, “What more can we do for China?” Well, Karen, here we are!

The compassionate service and endurable faith demonstrated by the officers, soldiers and staff of the Army’s Command in Hong Kong in the past decades won my utmost admiration. Also, for the warm welcome and support from those whom we have met and will meet on mainland China, I want to say, “I love you more than all the tea in China.”