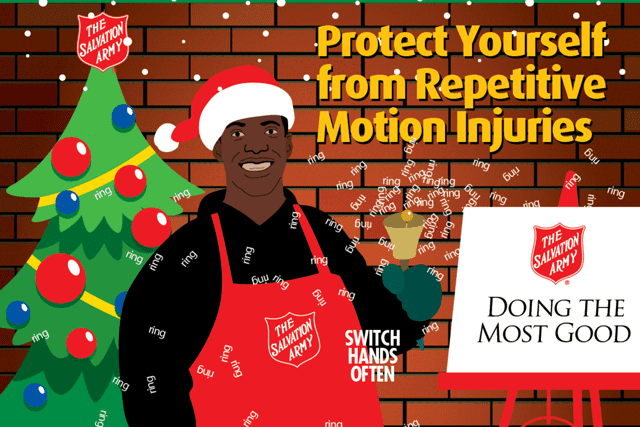 Throughout 2017, the loss prevention program will be delivering posters to Salvation Army facilities on a monthly basis with illustrations inspired by actual accidents.

Ken Saunders and Craig Nicles start each workday with a stack of papers, known as “the morning report,” waiting for them. This stack is made up of work claims and general liability claims from throughout The Salvation Army Western Territory that have already come in for that day—and they’ll keep coming.
Saunders, Director of Loss Control for the West, and Nicles, Director of Claims Management, see everything from ordinary slips and trips to the more bizarre claims, such as an injury sustained at a copy machine. While it’s impossible to completely eliminate work-related incidents, they want to curb the number of claims so that money for claims can be directed toward social services.
“The Bell Shelter could use more beds, and Red Shield could have the opportunity to have more members and provide more kids and families with opportunities. The more money we’re putting out to claims, the less we have to do those things,” Nicles said. “If we could free up some of that money, that’s what we want to do. We want to get everyone on board with the idea that they need to think more safely, because people are getting injured at work too often.”
By openly discussing potential hazards at a given facility, employees can take the necessary steps to limit those accidents. One bright spot has been the West’s Adult Rehabilitation Centers (ARC), which experienced the most significant drop in claims of any department over the past year.
The ARC reported a high number of auto accident claims, and so it began using SmartDrive, a camera system placed on the dashboard that monitors a driver’s actions while operating the vehicle. The ARC also enacted a new driver’s policy and has nearly eliminated all accidents that occurred from distracted driving in the past. The ARC’s turnaround fuels optimism in Saunders that others can follow suit.
“The ARC has been doing a really good job,” Saunders said. “They deserve recognition because they have dramatically reduced their driving incidences, and they’ve dramatically reduced their overall claim count in overall coverage. They got serious, and it made a difference.”
Beginning in February 2017, the loss prevention program will be sending monthly electronic newsletters to Salvation Army. The newsletter will have helpful information on safety, fitness, nutrition, health, prevention and stress management. The loss prevention program is also asking Salvation Army employees to sit down with their safety committees and talk about what is going on in their facility to see where improvements can be made. The goal is to put safety awareness at the forefront of everyone’s mind.
“When you’re talking about where we can do good, and shifting the money into the mission, this is where employees can make a difference in just coming to work and being safe,” Saunders said. “If they come to work and use common sense to do their job and not get injured, they’re going to save the Army money. Just by doing that, it will help more people get help from the Army because we are going to be paying less claims.”