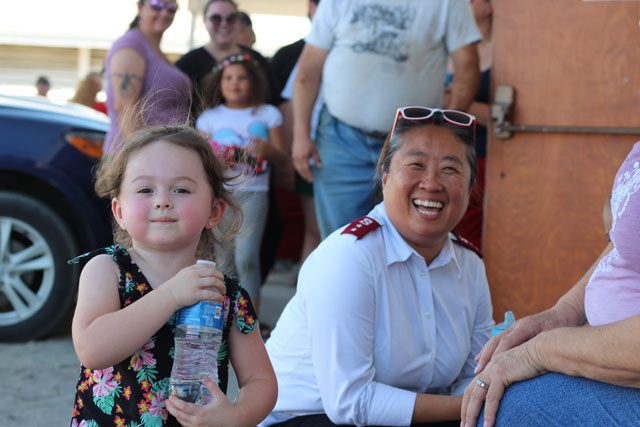 How The Salvation Army is serving after earthquakes in Ridgecrest

Another 4.9 magnitude temblor struck near Ridgecrest, California July 12, a week after the area experienced a pair of the largest earthquakes in California in decades. With recovery efforts underway, The Salvation Army continues to respond by offering meals, showers and emotional and spiritual care to those who experienced the brunt of the earthquakes, especially the larger, 7.1 magnitude July 5 temblor that was felt as far as Las Vegas and Mexico.

Currently, The Salvation Army is working in tandem with the American Red Cross and World Central Kitchen, a network of chefs providing meals in the wake of natural disasters founded by celebrity chef José Andrés.

In Ridgecrest, the Army’s Lancaster, California-based team serves breakfast at the remaining Red Cross shelter at Kerr McGee Community Center, and a team from Antelope Valley, California serves hot lunches via a roving canteen through the Trousdale Estates Mobile Home Park, which currently has no natural gas.

The July 12 earthquake happened as volunteers cooked breakfast in the shelter kitchen. Maria Deluna, the Program Manager for The Salvation Army’s Access Center in Lancaster, serving in Ridgecrest, said the first moments of the morning’s temblor were strong, and the team halted meal preparations to check on clients.

“Just being able to sit and talk to them and pray with them has been a big blessing to us,” Deluna said. The Army is also feeding people 25 miles away, in the nearby town of Trona, where water is slowly returning to homes, but remains under a boil water advisory. There, the Army is based at the Cumberland Presbyterian Church, where it has its shower unit that has two stalls and enough water for 500 showers. The church has also acted as a donation center with non-perishables, water, some fresh food, diapers and stuff for infants available for those in need.

“People here are very grateful, they felt like before we came out here that they had been forgotten because they had heard about the big response in Ridgecrest, which is a bigger city down the road,” said Patrick McGinn, Emergency and Disaster Services Director for The Salvation Army’s Del Oro and Golden State divisions.

Additionally, the Army helps deliver meals in coordination with the Christian Fellowship to those in Trona who can’t leave their home, like seniors and those with disabilities. Since the Army began its response to the Ridgecrest earthquakes on July 6, it has provided water, hot meals, showers and emotional and spiritual care to more than 300 people a day in Trona.

“They are very grateful for a small town like theirs that we would come out,” McGinn said. “Serving up here, people are floored by the response.”

McGinn anticipates the Army’s response extending until July 14 or 15, once both power and water are restored and the community seems ready to support itself again. Officials have warned of possible aftershocks in the days and months to come. On July 11, The Salvation Army partnered with Michaelangelo’s Wood Fired Pizza to provide a pizza party to the residents of Trona. The owner of the Bakersfield, California-based pizzeria Mike Gray reached out to Bakersfield Corps Officer Captain Kevin Pope, who is Logistics Chief in the Army’s Ridgecrest response, to see if there was anything that he could do to help. The pair worked together during the 2016 Erskine Fire in Lake Isabella, California.

Pope worked with the Incident Command Team to coordinate a pizza party at the Cumberland Presbyterian Church. Local community leaders spread the word through social media, and the people came. Gray and his crew, along with The Salvation Army and some local volunteers, cooked more than 100 pizzas in their wood fired brick oven, feeding over 400 people fresh homemade pizza and salad.

“It was amazing to see the community come together and spend some time together over a hot meal,” Pope said. “The conversations were lighthearted, and there was lots of laughter. They shared their stories and you could feel the closeness of the community. They are definitely ‘Trona Strong.’”

The Salvation Army will continue to serve the communities of Ridgecrest and Trona as long as there is a need. If you would like to support The Salvation Army’s work financially you can give online at goldenstate.salvationarmy.org.