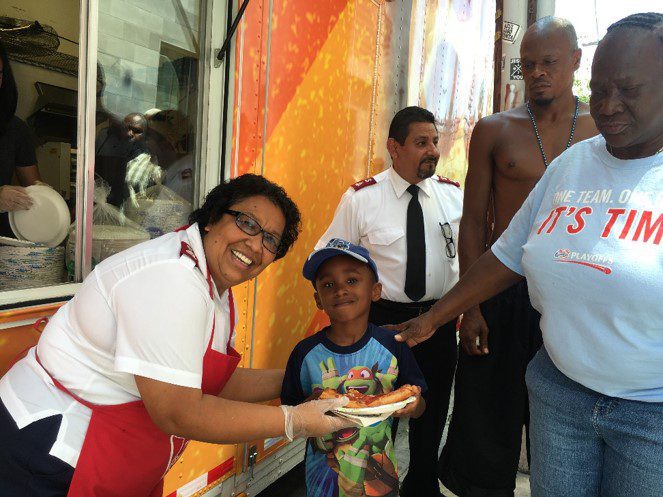 ‘Heart to God, Hand to Man’ on Skid Row

Los Angeles Central Corps serves residents of Skid Row.
Los Angeles (LA) Central Corps members and volunteers took to the streets of Skid Row on April 29, distributing food, beverages and socks. Representatives from the Southern California Divisional Music Department joined them, in the true spirit of a Salvation Army open-air.
“It was a blessing but also just heartbreaking,” said alto horn player Jacqui Larsson. “‘They need you, they need me, they need Christ!’”
This day’s event specifically recognized the contribution of volunteers to The Salvation Army’s ministry; however, the Skid Row outreach is a regular ministry of the LA Central Corps, under the leadership of Majors Lex and Patricia Giron. 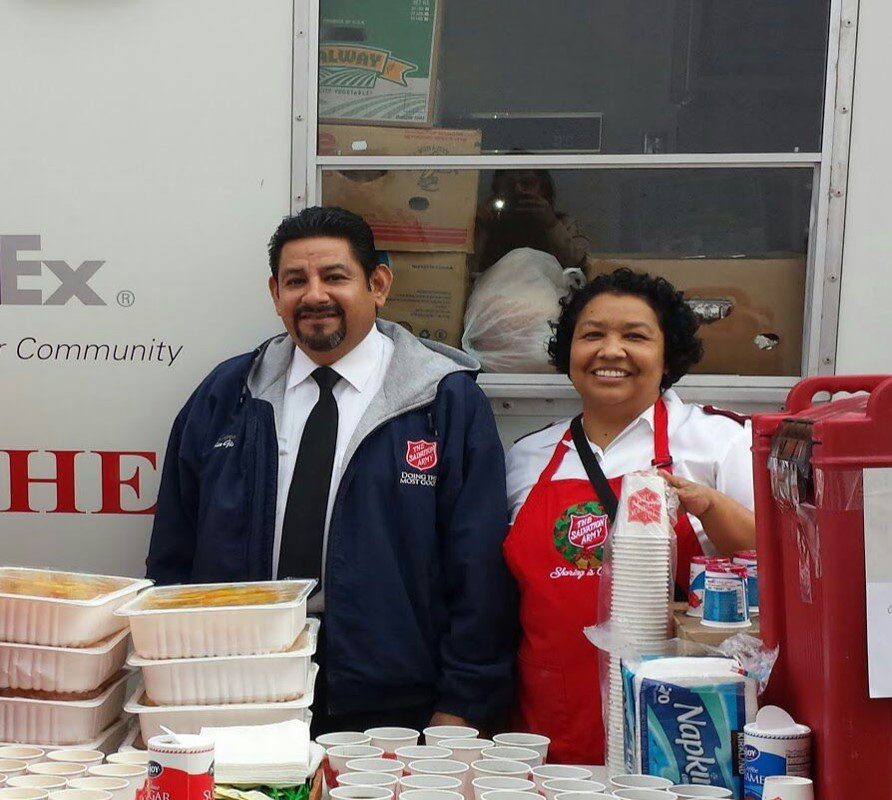 “Today, like every Thursday, LA Central Corps went to Skid Row, and with the help of State Compensation Insurance Fund volunteers, 400 meals were prepared and served in our Skid Row feeding program,” said Lex Giron. “They had a wonderful time and specially the beautiful experience to serve people in need. We appreciated Kevin Larsson and the brass band musicians from Divisional Headquarters who joined us for this special event.”
Giron explained the evolution of this ministry over time. The Girons’ first experience in Skid Row as LA Central Corps Officers was Thanksgiving Day 2009, when the corps’ young people prepared and distributed 200 breakfasts to people sleeping on the streets.
They continued the ministry on other occasions and in other locations, including MacArthur Park and Union Home Depot. Corps soldiers and community volunteers provided coffee and doughnuts, and sometimes meals.
“Everything depended on the food donations we received,” Giron said.
In 2014, the Corps received funding from The Salvation Army Los Angeles Metro Division to start a regular feeding program in Skid Row every week on Tuesday and Thursday from 11:30 a.m.–12:15 p.m. During that time they provide 350 meals.

Under the supervision of a lead cook, the meals are prepared in the Corps’ kitchen with the help of community volunteers. When the Salvation Army canteen arrives in Skid Row for the distribution, people are waiting in line. They receive a number, and after a prayer thanking God for the food, the distribution begins.
“There is a lot of human need in Skid Row,” Giron said. “The Salvation Army [continues to] work in that area providing meals, clothes, shelter, rehabilitation and educational programs.”
He recalled the words of General William Booth: “While women weep, as they do now, I’ll fight; while little children go hungry, as they do now, I’ll fight; while men go to prison, in and out, in and out, as they do now, I’ll fight; while there is a drunkard left, while there is a poor lost girl upon the streets, while there remains one dark soul without the light of God, I’ll fight I’ll fight to the very end!”